,After seeking inspiration from binge-watching all three series of HBO's "Deadwood", I tried a simple gunfight using TRWNN (only slightly modified) and my own characterisation ideas. 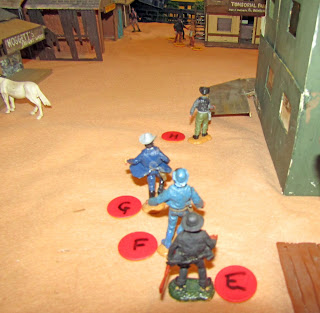 The setup was quite straightforward, four a side, Bounrty Hunters versus Outlaws.

A D20 would give their status, a result of 1 to 4 gave a civilian   whilst only a '20' would give a "Legend". Rolling for each side gave identical results, two gunmen and two shootist each. I gave each of the characters three characterisitcs, a Hand to Hand abilty, a Pistol ability and a Shoulder Arm (rifle) abilty. I used the method explained in my last post, a D6 for each 'level', Rolls of 1 to 3 gave no improvement, whilst 4, 5 gave +1 and a 6 gave +2  - with a maximum of '5' allowed for any characterisitc. Gunmen would roll twice for each and Shootists would roll three times, as if they had all gone throught the various lower levels. 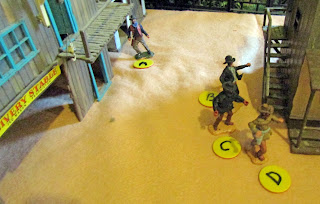 [The Outlaws, at the other end of the street, just about visible in the top photo] 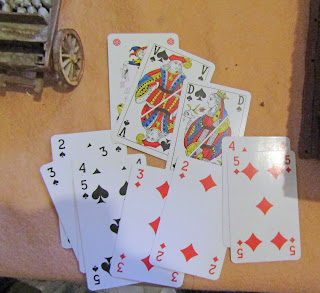 The cards, (it's a French Deck btw), the court cards were action cards the Queen (Dame) for  the Shootist's action card and the Jack (Valet) for the Gunman's action card. As no-one could use the Legend card, it was ommitted. There were also no civilians to be involved so rightfully or wrongly, I also ommitted the Civilian action card. (On reflection I probably should have included it) 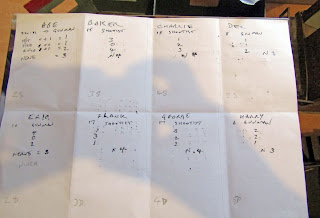 A simple sheet of paper would record each figure's characteristics, their card and any wounds 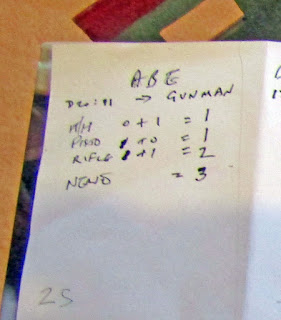 [Detail on "Abe". Note his Nerve value of '3', I set these as a standard. His activation card is the 2 of Spades - bottom left] 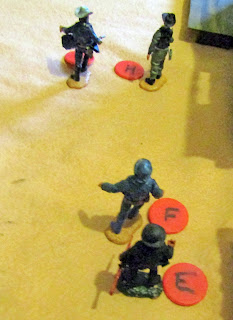 [George is the only BH to move forward, Harry shoots and misses -despite doubling the ranges] 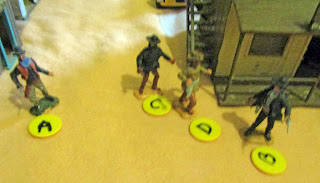 [There is little movement amongst the Outlaws] 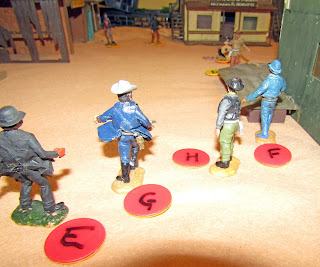 [Bob get a flesh wound to his leg, knocking him down, Del runs forward. past Bob shooting] 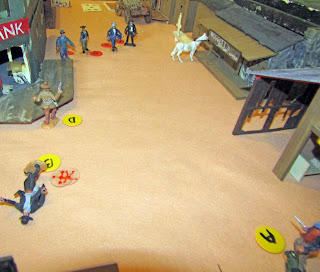 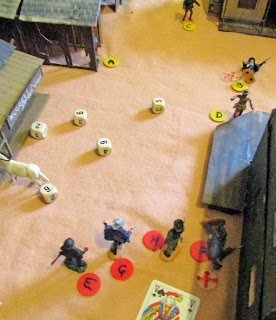 [Del, returns fire giving Frank a serious chest wound, laying him out for th rest of the game.] 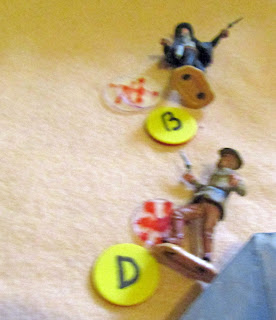 [With a carefully aimed shot then using an action card, George nails Del with a Flesh leg wound] 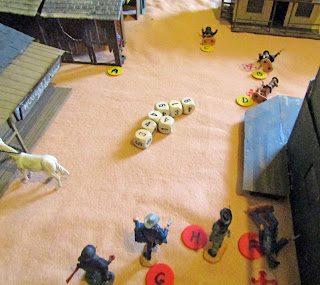 Charlie, who hasn't activated at all. finally decides to rush forward and join in,  he gets a measly 2" with his 2 D6 and is Knocked Out  with a serious chest wound !
This left Abe alone versus three of the Bounty Hunters, so I decided he'd head for the hills via the cover of the Livery stable.

The game was over  and it was obvious that the Bounty Hunters had won,.

The game had good points, such as the skill system working well and easily to figure out; few serious wounds, but a lot of 'grazes abounding'; cover rules worked well, the single shot at Abe caused him  to Duck back; Charlies 2" run was unacceptable imo and will be under review.

Did I enjoy the game ? Yes, despite not knowing the rules well enough , nor having a QRS to hand, it went much more smoothly than anticipated. The Activation system meant poor Charlie didn't move for all but one turn and when he did...well...

Another bout of thoughts on rules is in order, but I will be playing again!

Thanks for taking the time to visit, hopefull there was something of interest.

That's it then for another week, as always your comments are always welcomed and appreciated.