So after considering the changes I thought needed  to TRWNN to suit my less chaotic style of play, I set up another simple scenario as a trial run.

[The Law, given a couple of rifles to even out the side]
The Law this time would have five characters, using the character generation rules as previously, save for one major change as I've added a new charater class which I've entitled "Gunslinger" and lies between "Gunman" and "Shootist"
Randomly determining the Law, I used the following results on a D20
1-4 Civilian; 5-9 Gunman; 10-14 Gunfighter; 15-19 Shootist; 20 Legend.
Using this system the Law had a Citizen (J above), 3 Gunmen (F,G,I above) and a Gunfighter (H above).
The Banditos (below) had a vastly superior force, though they too had a civilian (E below) in addition to their two Gunfighters (A ,  B) and two Shootists (C,D)

[The Banditos]
The scenario was a simple one, the Law have just come from the telgraph/post office with th latest wanted notice but on emerging (a 2D6 random didtance towrds their office) instantly recoginise the notious Mexican gang on the notices coming down the street towards them The Mexicans are merely going the Bog Hotel looing for their friend.
The 'Citizen' of each group would be in a random building and would emerge on hearing a gunshot and on their action card if they passed a 'Nerve' Test (I've reduced the Nerve values by one  from the original TRWNN rules). A Civilian having two 'Nerve' adding one for each Level above to finally a Legend having a Nerve of '6'. 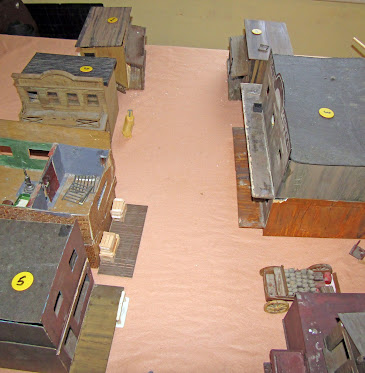 [The main street, where all the action will take place. Top left is building one, clockwise to building six] 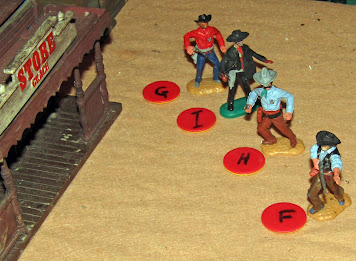 [The Law heading down Main] 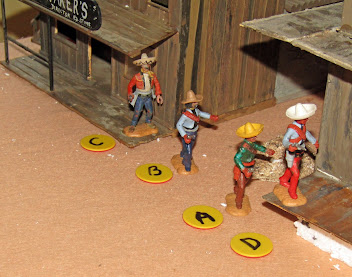 [The opposition heading up Main towrds the Law]
For the Action Deck, I used two cards for each Character and added the four necessary Action cards, one for each  Class. With the additon of the end of turn indicator, te Joker, this gave me a deck of 25 cards - much better for shuffling !
With orders of "Head for cover " fromBoth Leaders (C and F), the game started.
The first card out allowed Diego to activate and he immediately opened fire on rifle wielding Frank, despite the range and throwing only a single die he managed a '6' to hit, giving him a serious leg wound, leaving him lying in the dirt for the remainder of the turn. 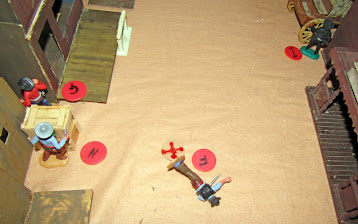 [The Law all headed (successfully) to cover, leaving poor Frank where he lay] 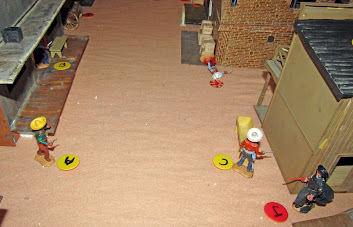 [Benito (top right is killed, but Jake (with his rifle] emerges from the  "Silver Dollar" back door]
The Meicans too headed for cover and given a second intiative Diego managed to get into the doorway of the big hotel, poor Benito though, having made it into cover was hit by a single die roll of a '6 was dispatched with a further double '6' 0 right between the eyes !
Frther exchanges of gunfire caused no casualties and Erico was still to appear (he did activate but failed his Nerve test.
With all the Joer turning up, indicating the end of the turn, I decided to call it a day and return to the game later this week. Setting up had taken well over an hour and even though I'd shortened the distance around the table, standing playing a single turn for about a further hour was as much as I could take. (bad back, old age,,arthritus, weak eyes etc., oh, I also have a cold!).
Part two then next week !
I enjoyed the simple scenario, with its random elements and my idea for walking running and sprinting worked well imo. I also allowed the Mexican Shootist to have a pistol ability of '6'. as having read through the skills is even plausible with the original TRWNN rules. He may be a tad exceptional, but is equally easy to kill!
Doubling the number of character cards also worked well imo, giving a much better act and react typ of game and a much better 'feel' overa;;.
In case you're thinking rolling 6 dice, to get a '6' is a bit excessive - he had to roll a '6' three out of four
times  to get there.
And for those that are interest (though I doubt anyone is), here are all the percentage chances of getting at least one '6' dependent on the number of dice rolled:-
No of Dice:                    1          2         3        4        5         6         7
Percentage chance:     16%    31%    42%   52%   60%    67%   72%
That's it then for this week, hopefully there is something here of interest and as always your comments , brickbats a bouquets are welcomed and appreciated.
Posted by Zabadak at 05:46