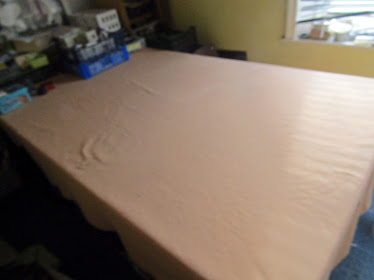 Another of the many 'treasures' I rescued from Bryan's (Vampifan's) collection, just about a year ago.
These boards have been lying quietly in a corner of the room where I orginally stored all of Bryan's rescued possessions and it was only when I'd finished cleaning off my games table that I thought about showing these boards.
The photograph on the right shows my table cleared off (for six foot at least), all ready to once more be used as a Xmas present wrapping startion - or maybe even a game !
I have fourteen of Bryan's 23" square boards, one being his skateboard park, which need a bit of TLC (but in the state I got it). There are another three boards, all of odd sizes: One car park board, 15" x 30"; one car park board, 22.5" x 30" and finally the base for his "Brummie's Burger" joint, 30" x 22.5". Why the change in boards sizes I don't know
Here's the photographs:

The boards, are all made o the same standard of evrything else Bryan made; I think they;re all 5mm foam with the roas etc, printed onto card (or some quality paper), so they're not that heavy, but thy are a bit bulky. Unfortunately they do need a new home as they don't fit in with my own terrain boards = if anyone want them, please drop me an email (contact detail on my profile page).

That's it for another week, next week's post may not happen as I'm away for a long weekend to the deep South, visiting relatives in Wiltshire, with a quick diversion to Winchester.
Thanks for taking the time to visit and as always your comments are welcomed and appreciated.
Posted by Zabadak at 06:13 22 comments: 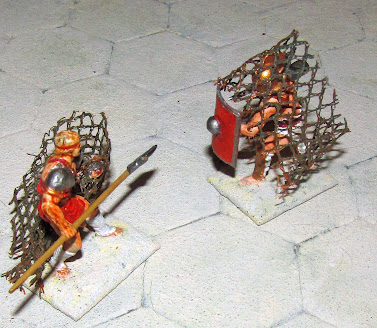 Another week where I luckily managed three games in our gladiator campaign. Firstly a concluding game for the second Munus  and two games from the third munus. Because of  how the various competitions were drawn up and because we were a player short, I ended up having to play in all three games, the first game I had my high level retiarius (net man) and a lower class Secutor (heavy armed but slow).The secutor's (or pursuer's) sole objective was to get me into close combat whilst I tried to evade his grasp by hitting him at long range with my trident.
Six dice  determine your various actions (attack, defence, recover fatigue etc.) and losing one or more is very restricting. The photograph on the right shows the situation in turn two; the secutor (on the right) having already temporarily lost a die on turn one from his own attack has been entangled by  a net-throw (timed when he had no dice to defend against it.) It was a bad entanglement and he temporarily had to lose another three dice ! It was many turns before he would regain the lost dice (needing sixes on his two dice).
With the first game out of the way, the second game saw my light spear-armed, but experienced  Hoplomachus take on my friend's heavily armoured and equally experienced Murmillo, My tactics of hit and retire had to be revisited as the Murmillo would be a killing maching at close range. I got a lucky blow in early on, giving him a bleeding wound. He returned the 'favour' later on, but the damage was done and he had to retire through fatigue.
The final game of the evening was a reverse of the above gmae, My inexperienced Murmillo against a very deadly Hoplomachus, two levels above him.
The arena had stakes as well as those slippery blood pools about and my game had to change to being the pursuer of the deadly Hoplomachus.
Each game lasted about 45 minutes to an hour, including drink breaks and general banter between bouts but I was well and truly done in by the end, exhausted but elated.
Unfortunately there are no immediate plans for further games for the next couple of weeks for all manner of reasons, but of course I'll be returning to the 'games' asap.
So that's it then for another week, thanks for taking the time to visit and of course your comments are welcomed and trult appreciated.
Posted by Zabadak at 05:02 13 comments: 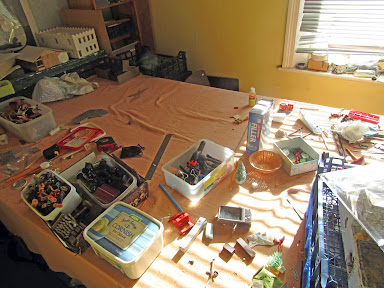 In a week where an anticipated game never happened, I managed to do an hour or two on tidying up my games table.
The photograph on the right shows that the table still has boxes and such on it, but only because I haven't had the opporunity to store them. My difficulty storing them is that they must go on top of a wardrobe for which I'll need the help of #1 son.
The four boxes on the table all contain parts of my western collection as do all the photographs below:
This concludes all my hobby -related endeavours over the last week, one clear of hospital, clinic or doctor's appointments ("yay").
And that's it for another week, who know I may get a game in this week.
Thanks for taking the time to visit and of course your comments are bothe welcomed and appreciated 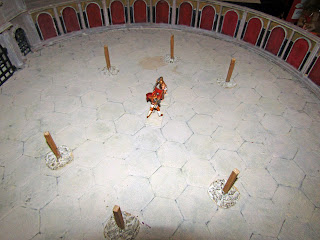 So this last week saw myself, #1 Son and two mutual friends continued our Gladiator games' Munus. This would be the second set of four games in the second munus, but using the entirety of the rules. We'd previously been getting to grips with the game's rules rather than the entirety of the campaign rules, so this would be the first time we'd tackled the extra campaign rules, in addition to the jump from the previous versionof the rules, to the current version(v1.4). Knowing there was a possibility of obstacles in the game I had to make some, rather than use other things.
The photograph to the right shows the six 'pallas' I'd made and were necessary for the first bout,.
Pallas were the great lumps of wood gladiators practised on and these were needed in the very first game! (A hoplomachus versus a Murmillo -though it's a secutor in the photos!)
The post didn't significantly affect the game though as they were easily avoided by the gladiators.
Making the posts took little time.
I dug out a scrap of 1cm square wood (a rocket stick iirc)and cut it into six 6cm long pieces.
I hot-glued the posts to 4cm square bases made from credit card type bits.
Next cheap filler was added to the bases,
PVa glue was spread over the bases and fine sand was sprinkled onto them
The same colour scheme was used as both my arena floor and gladiaotr bases were, dark brown covered all the base; a sand colour was heailt drybrushed over the basethen a final drybrushing of magnolia was applied.
I didn't paint the posts as wood, as they are wood ! (He's just lazy - Ed.)
Whilst  these pieces could represent both the Pallas and spikey pallas that are needed I really would like to have some braziers for when they are necessary. There's plenty choice to get 3D printed and I'll be looking for someone to make me some in due time, unless I can scratch-bild some myself.
However I also needed some blood pools- though just the four of them.
Some cellophane type sheet I had was cut into four blob shapes then some red paint was added  (my Tamiya clear red, ideal for blood, had sadly dried up) so a mix of acrylics was used.So with three games played (I won my one - first time in half a dozen games) and another one I have to play tomorrow it has been a very good week.
In other news, my games room is looking a lot clearer than it has been in well over a year and this week should see the table ready to be played over again.
WIth just a single visit to the doctor's to get a flu jab and not another apppointment for a few weeks, things are looking good and I'm in a much more positive mood than I've been in ages.

That's it then for another week, thanks for visiting and of course, your comments are both welcomed and truly appreciated. 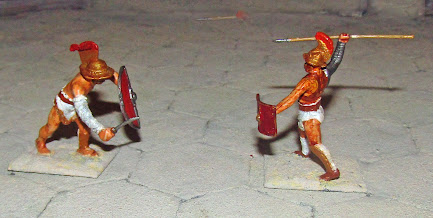 Last week ended with a mysterious phone  call on Friday inviting me to have a CT scan as they had a cancelation and could I attend on Sunday. Intrigued, I duly arrived on the Sunday to find out what it was for and who had asked for it to be done. All was explained away to my satisfaction and it was a very routine affair and the day was topped off by a very good steak dinner with SWIMBO (my chauffeuresse for the day).
A good result all round of a good week in so much as there were another two games of "Blood on the Sands" and I even won one - the first for a long time. The rules are now in their fourth iteration and imo,  they're almost in their final stage of completion.
Number One son, a mutual friend (who had been one of my original playtest helpers and myself) aided  in the completion of the first munus (games) of my recently renewed gladiator campaign.
Number one son would have to play two matches, the first was against our friend, he playing a Murmillo (a heavily armed gladiator) against a Hoplomachus. of a lower tier.
There was a lot of tooing and froing  (as in photographs above and right), so much so that by turn five they had returned to their original start positions.
Eventually the Hoplomachus wore the Murmillo down sufficintly to get a telling blow in, that ended the match .
The Murmillo appealed to the crowd and was granted a missio  (saving him from execution),
The second bout saw my tier 0 Murmillo struggling to get a hit on my son's tier 1 Thraex as he danced around me, continually wearing me down with a deep early wound and continuous (it seemd to me attacks on my fatigue level.  I got an early hit of his unarmoured arm but the writing was on the wall that I was done for and close to throwing the towel in. I did however make a final attack before I'd appeal to the crowd for mercy, but my dice were good and his defence roll was wanting. It was now down to where I had hit and what wound I'd inflicted. As luck would have it, I hit the same unarmoured arm as before and succeded in giving him a "slow kill", which meant the equivalent of two wounds which when added to his first wound meant he was unable to carry on and I'd won the match ! - Talk about luck ! (he wasn't best pleased). My son's Thraex was granted a mission too.
In other news, my gaming room tidy up was started, but is still ongoing and I've started a new bit of scenery, (more about this next time), I'm also on course to get another two games in this week as we start the second munus in th campaign.
Thanks for taking the time to view my meagre conttent (Gladiator fights are not that photogenic really, are they) and your comments are as welcome as ever and really appreciated.
Posted by Zabadak at 09:36 8 comments: