This collection of unfinished buildings were truly abandoned when support for my Boxer rebellion project fell by the wayside all those years ago.
They were however a great learning step in my model making, with the new improved roofs being a step up from the Japanese castle ones and the Temple ones.
It's obvious that the roofs are made from corrugated card but are laid on a stepped roof underneath.
The walls are 3mm foam-board (yep 3mm!) and after these were made and I stepped up to 5mm foam-board  I realised the joy of rabbeting corners, *I have a duplicate of the one shown that didn't survive over the years.
All the buildings shown here were for the British Legation in Peking (Beijing) in the year 1900 and were based on photographs and pictures in "The London Illustrated " newspaper (if memory serves),
All the buildings were intended to have lift-off roofs for figures (but no internal detail).
The feature of the British Legation that is most widely known is the entrance way, which is still in use today.

This was the biggest compound of all the Legations at the time of the 1900 siege and had to be the first to be built of probably eight or nine iirc,

So that's it then for another week, one in which I've managed zero hobby input and am still relying on posts that allow me to wallow in nostalgia - sorry.

Thanks for visiting, I hope you've found something of interest and as always your comments are both welcomed and appreciated.
Posted by Zabadak at 08:38 26 comments: 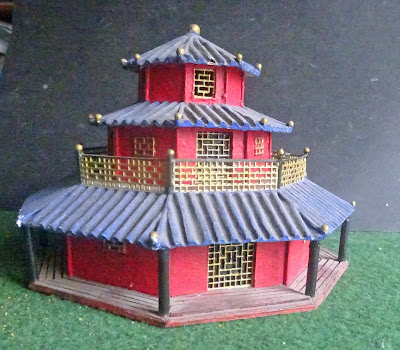 OK, so this is not really about abandoned buildings, but rather about the buildings I intended to model, but were never finished when the project was abandoned.
This project was part of my intention to build a playing area for the Peking (now Beijing) Legations during the "Boxer Rebellion" of 1900. Like most communal projects I've been involved in, I did my bit whilst the good intentions of others fell by the wayside - such is life !
The first building, one that was finished and did see some action, was the 'Temple-style building shown in the photograph to the right.


It was made as a temple in Prince Tuan's (iirc) estate that was central to a lot of fighting in the fight for the legations, though it wasn't used by myself, but was loaned for a demonstration game at Claymore many, many  years ago.
It has taken a bit of wear and tear over the years, but is still fairly presentable.
It doesn't have lift off roofs, but figures can be placed (just) on the narrow balcony, as my figures have 20mm square bases (rather than the obscene, spawn of the devil 25mm slotta ones).


It's hexagonal in shape with about an 8" (200mm) diameter and stands about 8" tall too.
Windows, wall decoration and the balcony surrounds are all made from "plastic canvas" (granny plastic), bought from haberdashers etc. which most, if not all, scratch-builders are familiar with.
The parts were cut to give some  representation of Chinese/oriental flavour to the model.


The model's main structure is made predomitably from very thick cardboard, whilst the roofing id of course corrugated card, liberally washed in wall filler (for strength.
Decorations are beads affixes to cocktail sticks, but I haven't a clue what the balcony surround supports are !
The ground floor roof supports are probably dowelling !

So that's a building that has seen action on the table-top, even if not by myself.
I suppose with a bit of suitable signage it could double as a Chinese restaurant in a modern setting too ! (Thought the roof should probably be green)

That's it the for this week, next week I'll may well show some really unfinished buildings, once more from my defunct Boxer project.

Here's hoping you've found something of interest in this post and as always your comments are both welcomed and appreciated.
Posted by Zabadak at 04:58 18 comments:

In another week where I've had real-life problems (nothing too serious) and generally not feeling well, here's another blast from my past.
This building is not a scratch-build, but rather a conversion from an original "Britain's" western building (The Ranch House ?) and parts from their barn (or livery stable). for the extension. It was converted sometime in the early 1970'swhen I was interested in western gunfights and it did see a lot of use.
All my western buildings have internal features comparable with whatever purposes they meant to be and the inhabitants or worker figures always were stored within the building themselves!
This was the only building I could reach in relative safety, but I will get around to featuring the others.

In a moment of madness,  I also did  two hours of hobby-related activity this week; I've based up 16 figures ! (Yes it really did take two hours too !)
Not much I know and yet more figures that will probably never see the games table, but when you have friends that state they won't play anything wherein real people died what can you do ?

That's it for this week's half-hearted excuse for a post, - sorry for that !

As always your comments are both welcomed and appreciated and I will get around to catching up on the backlog of other blogs forthwith as I rarely do much, if anything on  my computer at the week-ends).
Posted by Zabadak at 08:04 22 comments: 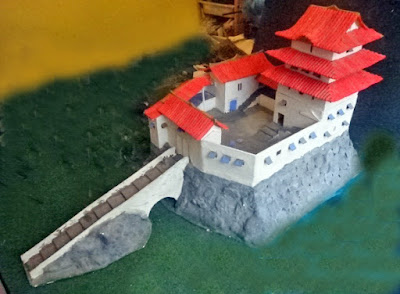 I hope there was something to interest you in this self-indulgent trip down memory lane and if you inclined to comment, it will be truly welcome and much appreciated.
Posted by Zabadak at 07:13 24 comments:

This week I'm posting about this model of a Mosque I made sometime about twenty to thirty years ago. It's copied from one in one of the wargames mag of about the same time, though I forget which.
It's built mainly from heavy duty card, balsa wood and bits and pieces.
The base is a piece of plywood about 12" x 15" and the height to the top of the minaret is about 18".
It was made for no reason that I recall but was used a few times in some Indian Mutiny games.
In addition to this Mosque, I made, at roughly the same time, two other buildings.
The base of this building was a block of packing form (rarely are these cuboid)
The main walls were all drawn out in this card in one continuous piece and 'wrapped' around the polystyrene block. Stairs were bits scrap with hardboard bases,
The whole model was covered in filler and painted
So there you  are, my entire 28mm middle-eastern building collection.
It took quite a while to dust them down, but it's still evident on some of the photos.

And that is it for another week, one in which I looked at basing some figures up, but didn't, perhaps I'll look at basing again this week!

Thanks for taking the time to visit and have found something to interest you in my nostalgic visit to old stuff!
Posted by Zabadak at 09:16 24 comments: