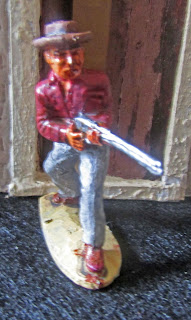 In a week where I mostly looked at and made notes on version 1.4 of the gladiator rules "Blood on the Sands" by Frank Sultana, I did very little else until the weekend. I decided I needed something to post about and decided to finish off Harry Luck (aka Brad Dexter) from the original version of the Magnificent Seven. His clothing was shaded and highlighted and his face done with a bit of a heavy hand as he looked more like Donald Trump than Harry ! I'd forgotten to highlight his face with the pink fleshy bits, but it's all I've got for this week.
Here's the photographs:

So in a week where I managed to not even really finish a figure I have very little to show.
The 'problem' I have with this project is that I had the realisation that I'll probably never see it all come to fruition and thus my enthusiasm dwindles as time goes on.

Thankd for taking the time to visit and as always comments are welcomed and appreciated. 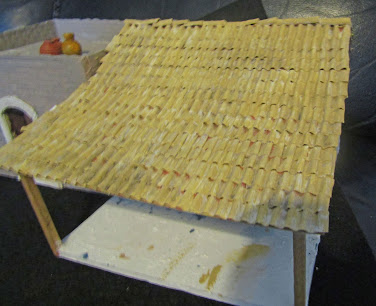 My enthusiasm for this week's painting wained as the week went on as I've mostly been painting roofs - just the two of them. I'm now up to painting highlighting or putting washes over them for the fifth or sixth time ( I lost track). The original intention was to highlight the darker mustard coloured with, progressively,  two lighter ones.  Unfortunately the yellows I chose turned out to be mostly greys - a Yellow/white problem I have with my eyesight and generally I see these as almost identical shades. I tend to see all colours much  paler than they should be (red/orange is another problem). A wash of another yellow ochre just about fixed the problem, but needed two washes and finally, to give that grim look I washed with a charcoal (black would have been far to harsh imo).
The finished "Blue House" roof is shown, in situ, above right.
I 've also done some remedial modelling on the "Blue House's" front window,  the "Jail's" front window and roof, and the roof of the "Shack".
Here's the photo's:
I also gave Harry/Brad some shading but that's for another day.
And that's it then for another week, not much I know, but I'm happy that I got anything done !
Thanks for taking the time to visit and as always your comments are welcomed and appreciated.
Posted by Zabadak at 04:00 16 comments:

So this week, whilst slowly melting and the usual real-life interuptions of two Birthday parties (One a Poker evening and the other my youngest granchild's two year old birthday party).  As part of the above activities I also managed three long(ish) walks, about as far as I can manage currently and was very pleased with myself. Most of the week I've been house painting, models, not the larger 1:1 scale ones.
The inside walls have all been done, some tidying up on the outside walls  and their plasterwork has all been done.There is still a lot of tidying up to do on window  and door frames etc., but nothing major. However the two pantile roofs are still to be re-painted and then the whole of the three-building block will need a lot of dark washes and some highlighting too, before being called 'finished'.
Here's the photos of the bits  I've done this week (with the jail plasterwork complete above) and I found out it does take quite a while to paint all the walls !

It may not seem a lot by most gamers, but I can guarantee that I've spent more than ten hours this week painting ! (Which is a lot by my standards).

That's it though for this week, no doubt next week will be more of the same (sorry).

Thanks for taking the time to visit and of course your comments are both welcomed and appreciated. 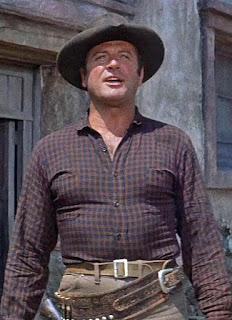 .... or at least he would if I ever get him finished!
I am referring to the fact that this week I slapped some paint on a figure that has sat waiting to be painted for over a year, in a sort of test-run for my new spectacles.
It's been an awful week hobby wise with little other than the weeekend to spend painting and watching football.
Monday was blog day which always leaves me exhausted.
Tuesday was a quick  ten minute routine hospital appointment that lasted most of the afternoon!
Wedesday nearly went for my new spectaccles only to be told that I had the wrong day. Spent the day instead sending off a package and getting exercise (which I need)  walking to and from the Post Office, which exhausted me for the rest of the day.
Thursday was the day to pick up my new specatacles - yay !  One long range and one short range pair duly collected before I was informed I was going food shopping.. My last visit around a supermarket lasted to about the half way stage before I had to retire to the recuperation centre (our car). This time I lasted until the tills (checkout for our colonial cousins) before being sent off again.
Friday my right arm and neck were too sore for anything other than moaning and seeking sympathy.
By the weekend though I'd recovered enough to do several bits of hobby related things in spurts of about a half an hour at a time - including painting the sixth of the Magnificent seven (the forgotton one), Harry Luck, as played by Brad Dexter (above right).
Here's the pics:
With his base looking as rough as as badger's arse rear end, I've wondered about putting them all on slightly larger bases, allowing for a bit of a better look.
I@ve also looked at the buildings again having psotted the rear of the shack wsn't done with the rest, because the bricks hadn;t been done !

Once Brad/Harry is completed  then I'll be looking totackle Robert Vaughn's character 'Lee', but goodness knows how I'm going to tackle that waistcoat !

And that's it for another week, and though it may not seem a lot, it was to me a great effort.
That's it then, thanks for taking the time to visit hopefully there's something of interest here and as always your comments are both truly welcomed and appreciated.

Return of the Five (plus Two)

In a fit of enthusiasm, got from who know where I dug out one of the models from my  54mm western project, based on the 1960s film the Magnificent 7, last seen on this blog a year ago! I thought I'd put some colours on to see if it would keep my enthusiasm going  (but probably more because I had nothing to post about this week!)

For each of the three buildings, I've tried to get as close as possible to their real-life counter parts in the film, which is very tricky ! (Each photograph of the model is followed by a similar view from the film)
Mostly I've done block colours, as either primer (in the case of tiled roofs) or trial colours, still needing shading and highlighting - but it's a start !
So, that's what I've been up to last week and hopefully this week I'llget a little more done on the model, after yet another hospital visit ( a follow-up to my operation0 and the collection of my spectacles  - yay! The latter will enable me to more successfully paint the window frames !
That's it then for another week, hopefully there was something of interest here - at least it's current and hobby-related !
Thanks for taking the time to visit, as alaways your comments are both welcomed and appreciated.
Posted by Zabadak at 02:52 18 comments: