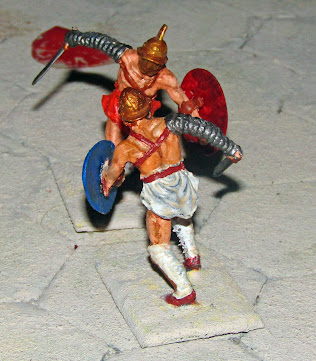 I haven't actually been on holiday, s the title may suggest, but having missed posting last week it feels like I have been.
The truth of the matter was that I forgot to post and by Wednesday, when I realised I hadn't posted I decided that I wouldn't bother.  I had to report about two games of gladiator combat  that we'd played, though I only mnaged one photogrpah (on the right)  before my camera decided it needed its battery charging !
This week's post was going to be about the "Battleground 2022" show in Stockton, but real life conspired against me getting there.
This post, such as it is was meant to be done yesterday, but I forgot (again), probably due to the unwanted knowledge that I now have three additional Doctor, Clinic and hospital visits in December.
Unfortunately that's all I've got for this week.
(The photograph is two Gladiators, representing two provocators after one has had their first move.
I'll try and get my players along again this week  after failing to do so last week,
That's it then for another week.
Posted by Zabadak at 05:07 8 comments: 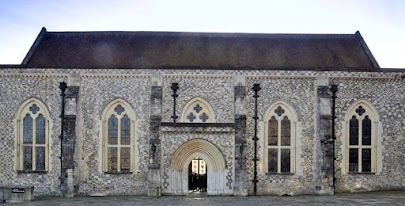 Along with visiting Winchester cathedral, I also visited the great 13th century medieval Hall (pictured right), famous mostly because of the reproduction of the round table .
The great hall has been a royal residence, a stronghold and a courtroom as well as beind used for TV and films.
The round table was painted by Henry VIII around 1516 CE.
Here's the photos:
I purposely didn't show these photographs last week as I wouldn't have had anything to post about this week. Last week I was occupied with a clinic visit to give blood and a hospital visit to scan my bones (being old etc.). The week was then topped of with a letter informing me of another hospital visit booked for December ! This week has already started with yet another covid booster jab (my 4th), but I am hoping to have some gladiator action this week, hoepfully,  that  I'll probably post about next week,
That's it then for this week, thanks for taking the time to visit and as always your comments are welcomed and appreciated.
Posted by Zabadak at 05:08 18 comments: 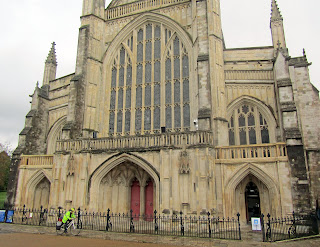 Not the famous western firearm, but rather the beautiful cathedral in the county of Hampshire, that was the main objective of our trip south (through horrendous storms). We only had a single day to explore both the cathedral and the Great Hall.
The photograph on the right shows the front of the cathedral's west wall, with the main window looking more like a modern day abstract mosaic as the original glass was shot through by parliamentarian soldiers in the Civil War.
Here's the photographs:

That's it for this week, I'm keeping the few photographs I have of the Great Hall, in reserve, until next week.
Thanks for taking the time to visit, sorry nothing to report on the hobby front, but  I'm still hopeful.
As always your comments are both welcomed and truly appreciated.