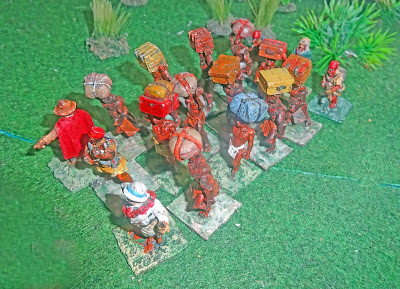 Thanks for taking the time to visit, hopefully you found something of interest and as always your comments are both welcomed and appreciated.
Posted by Zabadak at 08:57 16 comments:

OK, so not a very exciting title but having failed, once more, to complete anything this last week, despite my best efforts (I blame real life, various illnesses, Isis, Brexit and ageing) . I did stick to my regime of at least one hour's painting each day and even managed two or more on some days,
but horses, bloody horses are a pain and other than camels are the bane of my painting efforts.
So over the Xmas period, I had to 'put away' - (read get out of sight) all the pieces that were on my various paint trays.
I've now remedied this and got all the various models out once more in an effort to complete them over the coming weeks, so for this post, here are my current WIOs' progress.
The Egyptian infantry - all 90 of them (shown above) require their bases to be completed, some shading.
My British infantry have the least done on them, bases, straps and rifle, shading  all still to be done.

The Egyptian Cavalry - horse- just need their tack finished and then the riders finished and mounted on them !
The camels are currently mounted on magnetic paper on credit-card type bases  as an experiment in moving the single figures around more quickly.
The camels are more of a pain than even horses, despite being great figures.

So in a week where I made progress, I was still thwarted at the final hurdle !
Next week I'll be holidaying in the wilds of Cumbria, but I have still a "Jimland" adventure in reserve to write-up which I've been keeping up my sleeve for just this type of occasion.

Thanks for taking the time to visit and though there's not much here, maybe there is something you found interesting  ?

That;s it then for this week and as always your comments are both welcomed and appreciated.
Posted by Zabadak at 06:56 18 comments:

OK so over the last week, once more, I haven't managed much, but I have managed to base of fifty models and undercoat them. I tend to take more time that is absolutely necessary when basing as I like to leave a lot of time between 'drying' stages.So after cleaning off what little flash there was I cut bases from plastic credit cards, store cards, phone cards etc. Next step is glueing figures to the plastic bases using either super-glue (Lok-tite gel -from Poundland). Then after a long drying period they were 'gunged up' using Poundland filler (of course) and again left to dry over night. Final stage, before spray -undercoating was to apply PVA glue (undiluted) onto the base and sprinkle them liberally with sand.. The undercoat was applied after yet another fairly lengthy drying time.

I also had a bit of repair work to do as two of my OG horses had lost their tails and being the well-organised person that I;m not I quickly lost one of the tails !
I carved a new tail from a lump of lead acting as a sprue for some Sudanese Dervish.
The result of the drilling and gluing of tails is shown on the photograph to the left, with the 'home-made' tail on the left-hand horse.

In the "Pulp Figures" 'Amazon Adventurers' pack was a figure with a pistol that I cut 2mm from the barrel of his pistol (he's the figure second from the left in the photograph above), which to scale represented anywhere between 4 and 6 inches and it's still a big pistol too as is evident in the photo !

Sometime during one of the many drying periods I decided to have a go at my 'Loom' box, which for the uninitiated is a box intended to keep elastic bands that was a children's fad and consisted a]of elastic bands,. Once used, the boxes found their way  into my hands (I now have three). This particular one I'd earmarked to keep all my "Congo" card, tokens and measuring sticks in, once the various partitions have been glued in place as the tokens tend to slip under the various partitions.
the sticker on the front was a pain in the proverbial to remove. I used  a scape, water and 'White spirit' in copious amounts over several days.
Even though it was a struggle getting back into the regime of at least an hour a day on productive Hobby time, I did manage it  and although it doesn't appear that I accomplished much, I was pleased with what I did achieve.

That's it then for another week, over the next week I'll hopefully  be daubing paint on a lot of the above (not the box) .

Thanks for taking the time to visit, as always I hope you've found something of interest and of course your comments are both welcomed and truly appreciated.
Posted by Zabadak at 04:38 17 comments: 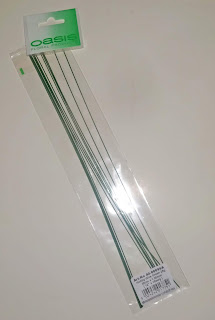 No this post isn't about filler,  but is rather a filler, as I haven't done a thing hobby-wise in the last two weeks, or managed to view several blogs (my own included - due to intermittent Interweb problems) this post is a bit of a filler, until and if I get back to posting ! As always, when I break routine, I find it very difficult to get back into the swing of things !
#So for this week's post here's a pack of garden wires I picked up at either "The Range" or "Poundland" before Christmas.
The pack label (shown below) is self- explanatory - 12, plastic coated 1mm thick wire pieces, each 30cm long.
I picked these up specifically to convert into lances for my lance-less Egyptians. I do have 'steel' spear/lances/pikes, but they are very thin (and expensive). For my Mahdists, I converted a lot of paper clips into lances and spears and using the same process made a dozen or so more from this wire stuff. 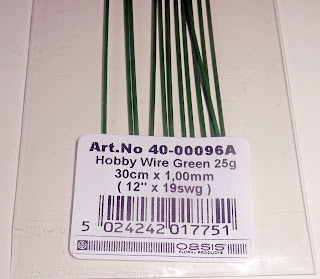 I use a 2lb hammer (masonry hammer) as an improvised anvil and flattened the end of the wire with another 'normal' hammer, finishing of the point with a quick file job to make a slightly rounded point. (health and safety would be proud). The next step was cutting the piece to length, I used 50mm lengths representing a spear or lance at somewhere around 10 to 12 foot long. IIRC lances were around 14 foot long, so they probably should be a little longer.


I'll be trying to get back into my regime of at least an hour's hobby-related work a day over the next week, even if all that happens is that I glue some of my recently purchased to my already cut bases and add gunge, sand etc.

So that;s it then for another week, thanks for taking the time to visit and any comments will of course be both surprising and welcomed.
Posted by Zabadak at 04:14 18 comments: