The aftermath of last week's game was that I took a long hard look at the TRWNN rules. The shooting workesd well imo, low casualty count and a quick game overall. The game took about three hours overall, half of which was setting it all up !

[The Bounty Hunters from the game]

Movement was a joke, though I'm pretty sure a lot of TRWNN players have probably never questioned it. I intend to change it to a more player firnedly system, using ideas of my own, some of  Dave Docherty's changes from his version of TRWNN ("Blazing Dice") and some of the movement mechanics from Shoot n Skeddatle. I will be referring to my old "Old West Skirmish Rules" as reference for all changes.

I don't mind random movement rates and even if figure has to use all of what he rolls on the dice (citizens only), but being able to walk fater than a run is a bit ludicrouse.

[The Outlaws from the game]
So I'm considering the following -  a walk will be a standard movement of 5", which the character may use all or some of.
A run will be either normal or fast; a normal run will be 6" plus the roll of a D6, giving 7" to 12".
A fast run will be 12" plus the roll of a D6, giving a range of 13" to 18".
This gives imo, a more logicalspeed ratio, no longer will someone be able run faster than somone running 'slower' and I will be getting rid of the double (or triple) '1s' making you fall - it's silly.
Horse movement will operate along the lines of my vehicle movement, horses will go through an accelartion of +6" each turn and a decelarion similarly plus a D6.
The intended effect is that overall the players will have a better idea of what their figures can do. 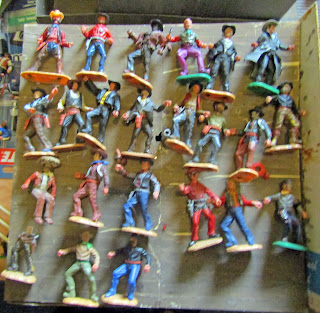 [Not exactly a cast of thousands, but a lot of my early 'conversions']
I'll also be looking at what actions a player can do within a turn, drawing a gun, opening a door, climbing and so on.
It did perturb me a bit that the low number of cards for initiative/activation meant that there were times when only a few characters acted beforre the turn was over - the very first turn had only two of the Outlaws moving before the end of the turn! With only a very few characters, this will be inevitable.
To combat this, and to make most turns lasting a bit longer, I'm going to double the number of each character's character cards. It may have the opposite effect I intend, but but it will give a much better chnace of each character acting at least once.

[two Britains' conversions,a one of my own conversions.]
Civilians took no part in my last gsme, but in every game I played in a town, there were always civilians, everyone in the town outside of a building can hear gunshots (and some inside too) and we always had the civilians do something (mostly runaway), so I'll be looking more closely at the civilian rules in the future. I also need to have better charactersitics for the characters too - Are they brave, cowardly, notorious, hated/loved and so on. TRWNN has some of these elements but no real guidance of how and when to use them save by player choice. Shoot n Skedattle has Abilty and Strength as characteristics but only mention them three times in their rules - bit of a waste. TRWNN skil set needs close inspection. 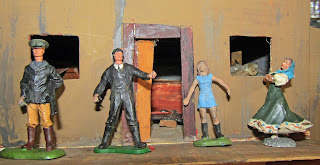 [Britains again, plus a random gypsy dance of unknown origin]
The game and the rules used still have a long way to go to et the game I want.!

[The total female population of my towns, save for a couple of sitting females]
Civilians in my games reacted according to their stats , with results of either standing watching runnibg to cover or joibibg in; whn I've gone through the long (welcomed)  list of citizen actions in TRWNN, I may have a better idea of the direction I wish to head in.
I do howver need a lot more females ! - in 54mm they;re very hard to come across though I may have to look at having them printed in 3D (there are three usable ones  on "Thingyverse"). 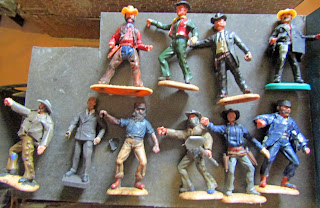 [More citizenry, with some of the then newer Timpo models]
That;s it then for this week, I've done very little, other than reading a lot, watching a few westerns (Watch "The Sisters Brothers", if only for the use of cap and ball revolvers]and made a couple mor lamps from beads.
Thanks for taking the the ot visit, sorry for the por post, but as always your comments are welcomed and appreciated.
Posted by Zabadak at 08:10