So it wasn't as difficult finding the figures I would be using to oppose my pirate forces.
For some inexplicable reason, I seemed to have organised them into groups of sixteen.
They're all Irregular Miniatures from their 28mm Marlborough range. I like them ( a lot) and not just because they're cheap and I'm a tight-wad!
These figures cost a measly 90p when bought singly, that goes down to 75p when buying 24 or more and a mere 72p when buying 100!  Value for money or what ?
I did buy a dozen or so cavalry from the range too (still unpainted after fifteen years!) - again cheap at £1.80 each or £1.50 when buying eight .
I'm sure that when I bought these, alongside all my pirates, I was trying to emulate someone else's game with a central island/town etc. in a grand treasure-hunt or similar. There was one thing that I was a bit disappointed with when I re-discovered them - although they looked finished, they weren't!
There's not a lot to do on them, they're fairly usable as they are and at least the bases have been finished (Bases - Bah, the bane of my life)
There's quite a variety of figures in the range though the left-most Officer in the photograph on the right would also make good piratical captains I don't thik he's originally part of the range.
I'm fairly sure that some aficionados among the readership will spot inaccuracies with regard to uniforms etc, but this range is a generic range. Mine are painted up to represent British forces, but could just as easily represent the other major powers in the Caribbean (Spain, France etc.)
The colour choice of coat-lining, turn-ups etc. was based on my local regiment of fusiliers that had 'Gosling green' facings, rather than the all-too familiar blue of 'royal regiments.
Drummers of course wore reverse colours, hence mine all have green coats with red facings.
The units that can be seen in the top photograph all have a drummer present save for the 'Grenadier' unit (I don't know why - I may have been under the impression they didn' have them).

A well as the Officers, there are also NCO  figures armed with a Halberd and one suitable as a ensign - though I haven't decided upon which flag I would use.
The stances of he NCOs do show the fairly limited number of poses (something I like) and whilst the standard line infantry have firing poses I've opted to to have any.


I opted for marching figures and figures with ported weapons as they match nicely with the NCOs
These jolly fine chaps fit in really well with the majority of my pirate figures, they're well proportioned and don't have stubby looking muskets, these look great, even if their bayonets aren't fixed.
The grenadiers I intended to have striped stockings and would be used as marines, - yet another bit of painting yet to be done!

And that's it for another week, one day I may find the cavalry figures I bought way back when and may even get them painted up, but don't hold your breath!

Thanks for taking the time to visit and as always your comments are both welcomed and appreciated.
Posted by Zabadak at 14:07 24 comments:

The subject of the post should really have said, "Move along please there's nothing to see here" which would say it all really (but was a tad too long). The reality is that I've been unable to do anything hobby-related during the last week due to real life issues.
I've travelled the length of the country to a funeral (and suffered the resulting hangover) and after a quick turn-around arrived home to receive my relatives from Canada whom #2 son was babysitting. Next up was a wedding and meeting two of my cousins whom I hadn't see for about forty years or so.
Next up, with not nearly enough sleep, it was off to meet another relative arriving from Canada (luckily our house is big enough to accommodate all these newly arrived foreigners).
The latest guest arrived today, so no proper blog this week - as I'm sure you've already guessed.
(I've thrown a couple of pics from my Gladiator project on here to pad this out - just in case you were wondering - everyone likes piccies right?).
So, apologies whilst I back-track and catch up with all your blogs posts that I've missed commenting upon in the last week or so - I promise I'll try and catch up, as time allows between the compulsory bouts of entertaining I'm compelled to do.

In other news I have found the promised opposition to my pirates and given the opportunity (they're in one of the now occupied guest rooms) to photograph them, they may well feature next week (fingers crossed).

That's it then for this week, thanks for taking the time to visit and as always your comments are always welcomed and appreciated. 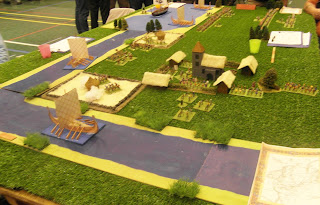