So, despite being in a modicum of pain, I set off Saturday morning with #1 son, his son and a mate who drove us to venue at Stockton ( a mere hour's travel away) to my second Battleground event.
As I didn't have a shopping list I went around all the games first then the traders.
Be aware that this post is very photo-heavy.


Here's my photographs of the event and a few comments :

Stafford and District's Battle of Blenheim was one of my favourite games of the show and I had a very pleasant time talking to the chaps playing it.
Next up,  my friend Colin's (of Carry on up the Dale's Blog fame) Battle of Zurich 1799
Next up was Durham Wargames Group's Battle of Zyrabulak 1868, again a large table using 28mm figures,
Battlefield Trust's Battle of Piercebridge 1642, an architectural model, so probably very accurate was more a display than a game, and in a very small scale and I initially thought the white covered waggons were sheep!

What would a wargames show be without a bit of Napoleonics ?
Brompton Bankers, Battle of the Standards 1138, using 28nmm figures

With Mr Wiley's participation game I knew what to expect, but with The Society of 20th Century Wargamers, I didn't. It was a strange looking game centring around a French Foreign Legion Outpost.
Prince Bishop wargames Club's "Battle of Byczyna 1588" :

Scarborough Games Society put on two games on a single table - that confused me !


Matt Crump put on a participation game of "What a Tanker" and I'm now a convert to this fun game, as is my 5 year old grandson!
Sunderland's "Malifaux":
Nate Zettle put on this "Blood and Thunder" pirate game, a genre I'm interested in, but the 'special' cards needed really puts me off this system (amongst other things).

"Warlords" put on two demonstration games of their products:
That wasn't all I'm sure, but it's all I have photographs of . I spent a long time talking to two chaps (the Lancaster Cellermen) using wooden pieces in a Krieg Spiel type of game and got so interested in their game that I completely forgot to take photos - sorry guys!

It was a great day, seeing many great games and meeting a lot of  old friends.
My loot list is less than poor, it's non-existent. I ate the pie I bought for lunch and my wife ate the peanut brittle I bought her as a present, so no evidence remains !


Thanks for taking the time to visit, I hope there's something here that you find interesting and as ever, your comments are both welcomed and appreciated.

After a week of the usual ups and downs of real life I managed to finish off my four "Steve Barber" Thylacines, the prehistoric "Tasmanian Tigers" that only became extinct in the 1930s.
It did take me two attempts to get a colour scheme that I was satisfied with and although maybe not an exact match for the real-thing, I reckon it's close enough for my purpose.
They're meant to have 15 to 20 stripes from their tail almost to their shoulder, but I managed about 10 and they're not that obvious from the photographs, just as they were in reality (especially with my current vision). They're small carnivores and from accounts hunted nocturnally.
In other news, I received my second order From "Steve Barber", a mere eleven days after ordering, a major improvement on the five weeks, four days of my previous order!
The two "terror bird" types (Phorusrachus), came with nests and they're great sculpts (- probably his newer ones) as is the Smilodon - one of the best I've seen imho.
The woolly rhino is yet another two part model and didn't go together that well, requiring the usual filler to get a result and it was also a bit small imo, so probably an earlier sculpt to fit his previous 20mm prehistoric range. 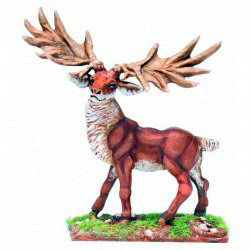 Finally the Megalosoros, a giant Elk thing, looks beautiful in the web site's picture but was a nightmare to get the head to fit the body and of course required filler. To get to the stage of having the head affixed to the body took about two hours of filing, drilling and a lot of swearing, plus I still haven't added the huge spread of antlers!
It's a huge potentially beautiful model, as it should be, but those antlers I've no doubt will be a pain to add too, as the fixing points are very small.

The day after my order to Steve Barber,  I also put in an order to "Fighting 15s", my first to this particular website.
The order was for the "Eureka Figures" Auroch Family group, a Bull, two females and a calf. Their communication was very good and despite stating that they would be not dealing with order between the 7th and 11th November (my order was placed on the 5th) they arrived at the same time as the Steve Barber order - the 15th of the following week., so I was very pleased!
Aurochs were extinct in Britain by about 2000 BCE but Julius Caesar mentions them in his annals and were extanct in Eastern Europe until the 17th Century..
Their horns and demeanour remind me of the archetypical bull-fighting  bulls generally depicted in cartoons.
They fit in well with prehistoric games imo and their colouring is a bit unique too - Black bull with white stripe down its back but tan coloured females and chestnut calf; the latter darkening to black if male and lightening to tan if female.

So whilst it's not  been a particularly productive week,  I have finished four models and have started on the six wolves that I have and also started basing up all but the Megalosorus.

That's it then for yet another week and as always your comments are both welcomed and truly appreciated.
Posted by Zabadak at 04:50 20 comments: