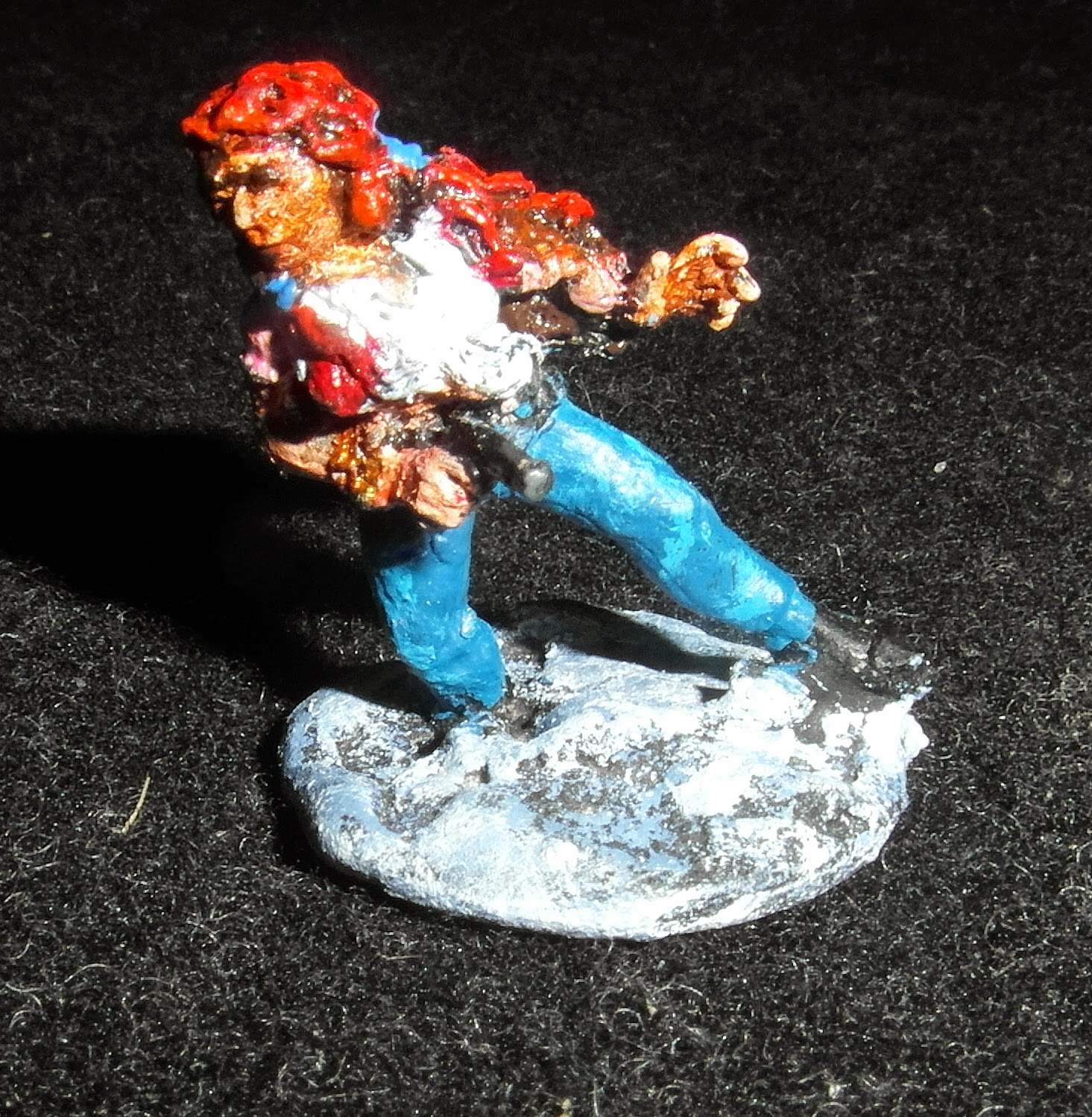 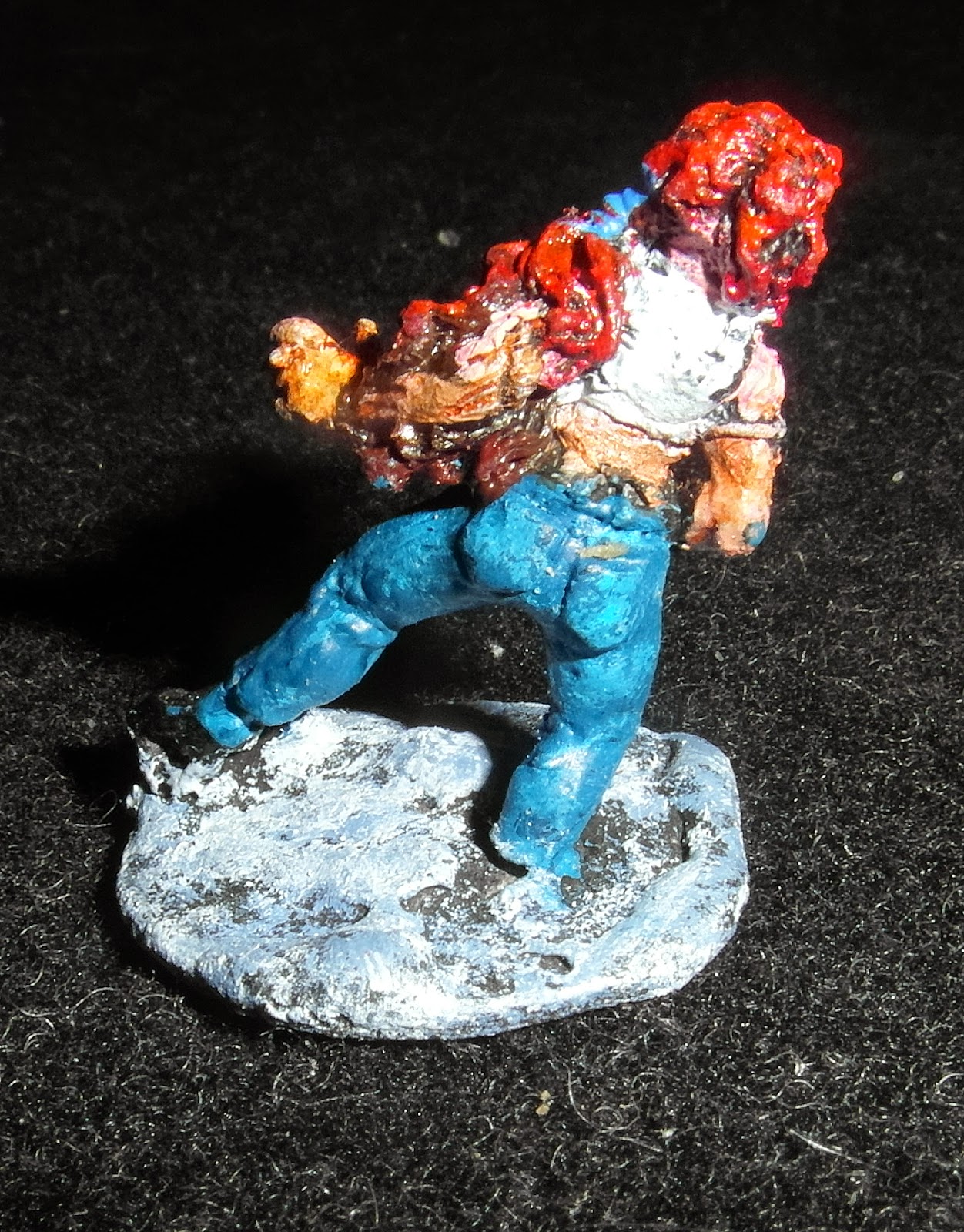 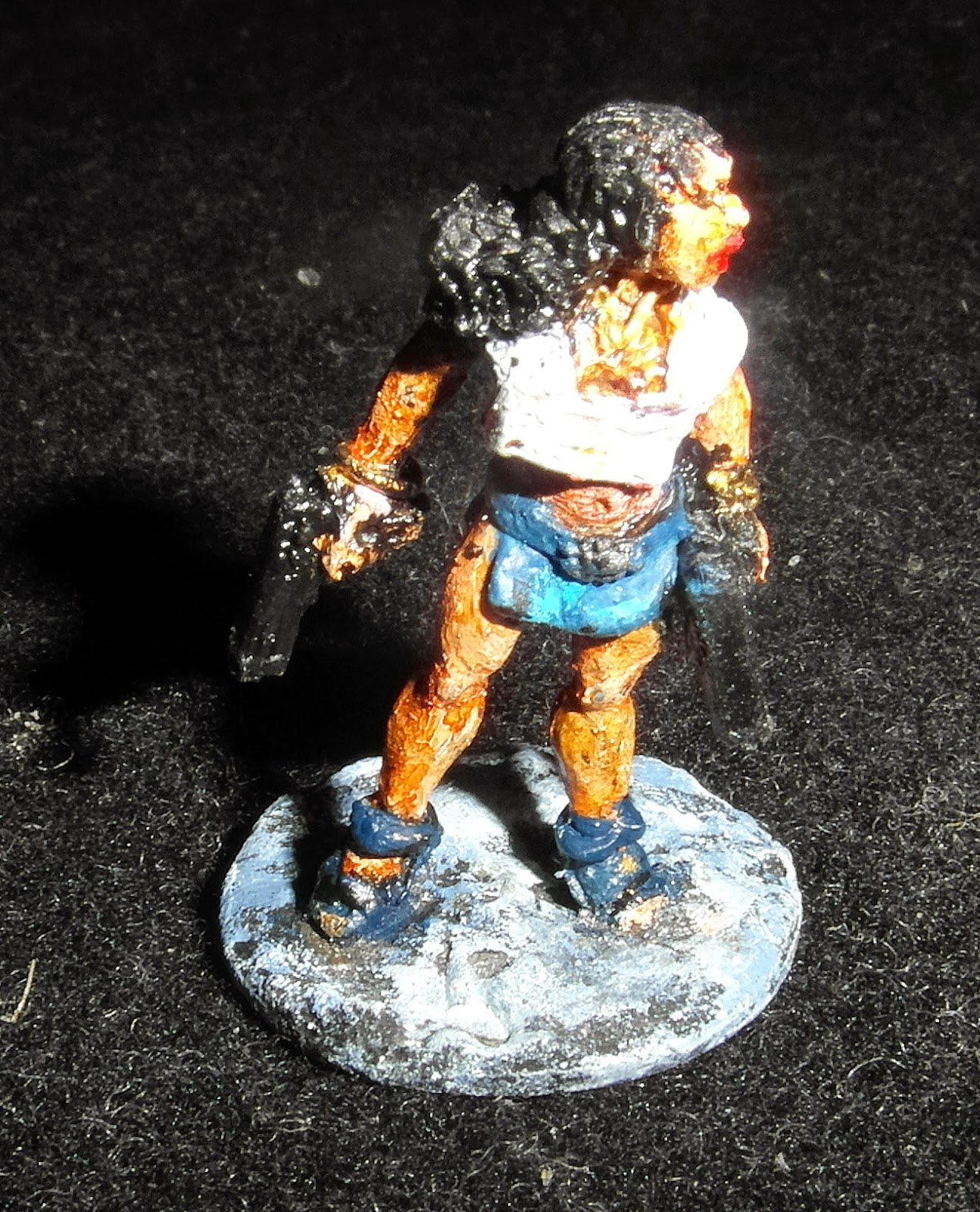 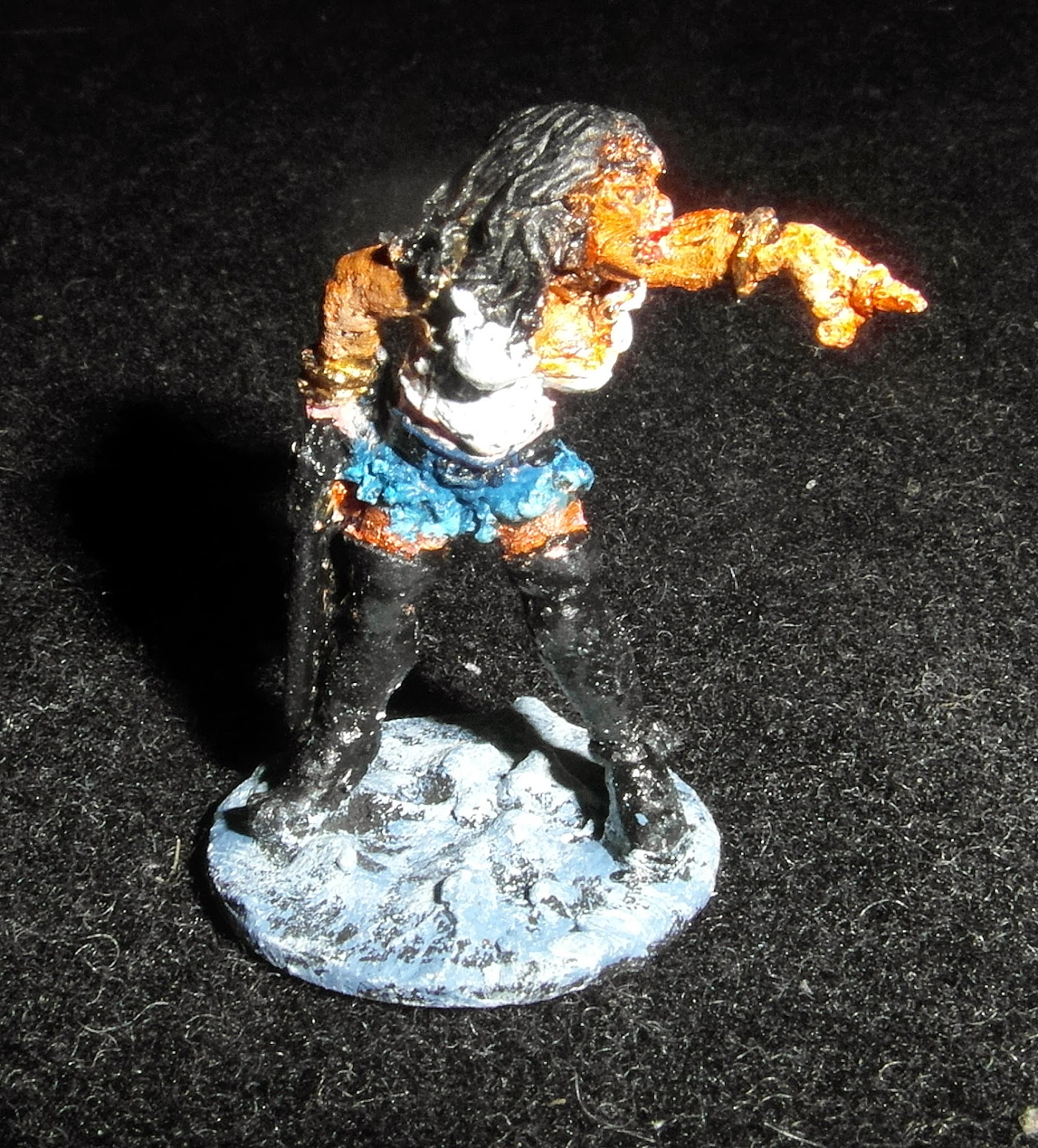 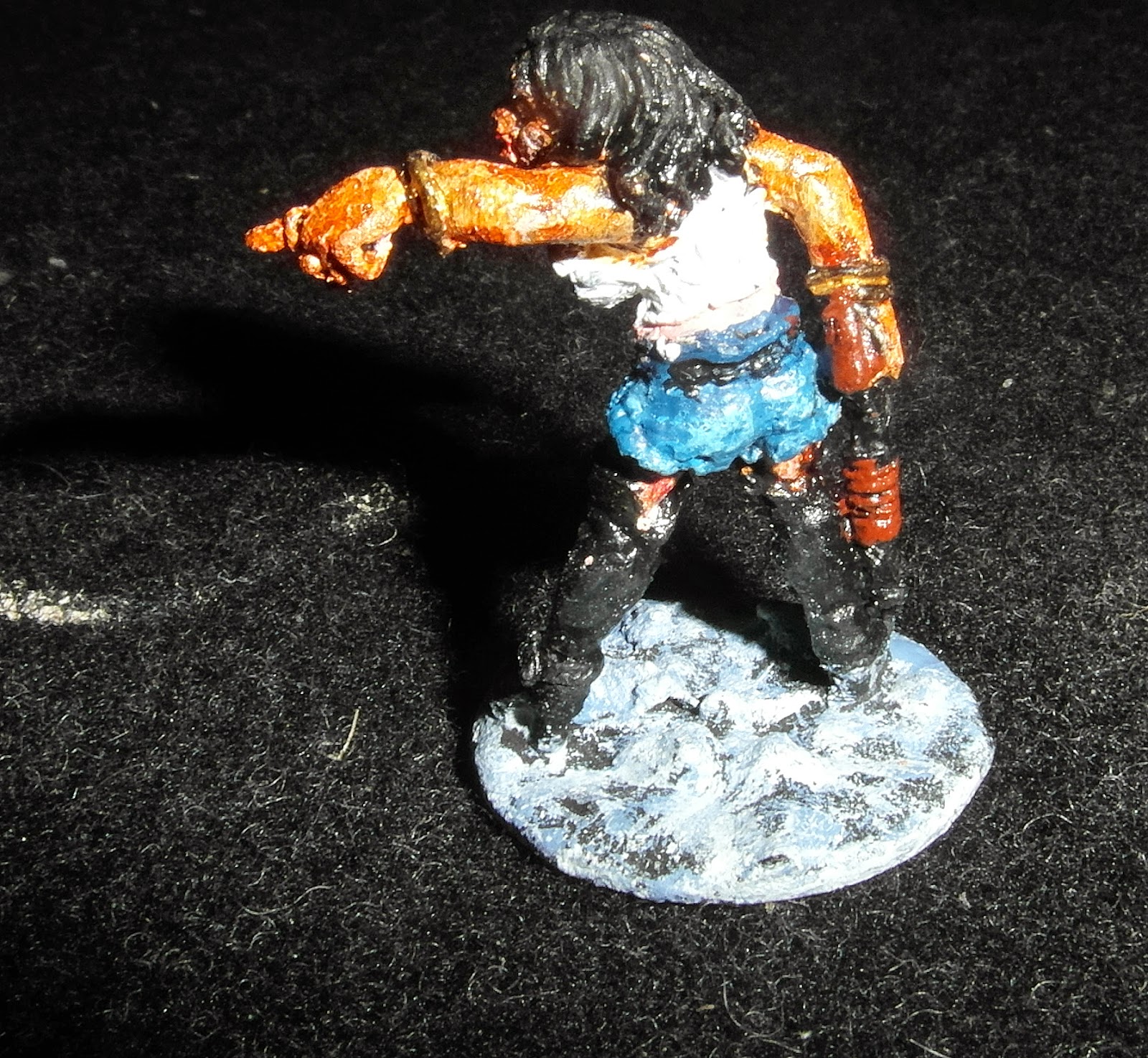 These have come about because I received a partially complete box of the Wargames Factory survivours and couldn't face having yet more armed civilians.
I've made these figures up from various plastics that I have, namely the Wargmes Factory Surviours (men) and the WF male zombies, though there is a single head from the female vixen's sprue (the girl).

It will be noticeable no doubt that there are no women in the ranks of this protest, but if I ever come across a sprue of the female survivouors, I will no doubt add to the masses.

So in batches of three, here's a few close-ups as I know you'll be more interested in reading the signs than looking at my painting efforts.
Just in case you can't read the sign on the right it says "LEGALIZE MARIJUANA. Quickly before they search my Fanny pack!"


There not that many of them armed with anything more than an improvised melee weapon, but I'm sure the 2 x 2s of the placards can be quite effective.
The right hand sign has the word "I'd" covered by the central sign making it read "I'd make my car...etc."


The signs themselves were all taken from the actual protests on the Interweb and photoshopped to a usable size.
They were glued onto some thin card and the back were given a quick wash of paint in an attempt to mask the card.

The rough looking 2 x 2s for the signs were filed down matchsticks (into a rough paddle shape for easy of gluing the sign onto).
They were cut to size after the signs were allocated to them.

Gluing the wood matchsticks to the plastic figures was a real pain, as was finding sufficient left or right hands that didn't already have weapon in them.
As these were plastic figures I cut my own very thin plastic bases for them, for ease of gluing, rather than the normal washers I use.


There are scenarios for mobs in ATZ (Haven) and mixed in with a few rioters (molotovs, etc) these will at least help 'bulk' them out.

That's it for this week, as always your comments are both welcomed and appreciated, but as I'm away on holiday for a few days responses to any comments may be delayed until I find internet access.
Posted by Zabadak at 03:50 46 comments:

OK I'm, not officially taking part in Zombtober, but coincidentally I was about to start on my next batch of figures, that included these eight zombies. They're are all plastics and are made from a mix of manufacturers' bits and pieces. I'm sure those of you who own any of the plastic zombie figures will be able to recognise their origins.

All the bodies I've used are from Mantic zombies (the fantasy ones I believe) and the legs from mostly Wargames Factory zombie sets, though I have included one set of Mantic zombie legs on the female zombie.
It's nothing new of course, I've seen others do similar Frankenstein monsters from different kits.


The heads were an assortment of Wargames Factory, Mantic and Studio Minis, with the single female's head from the W.F. Vixens set. 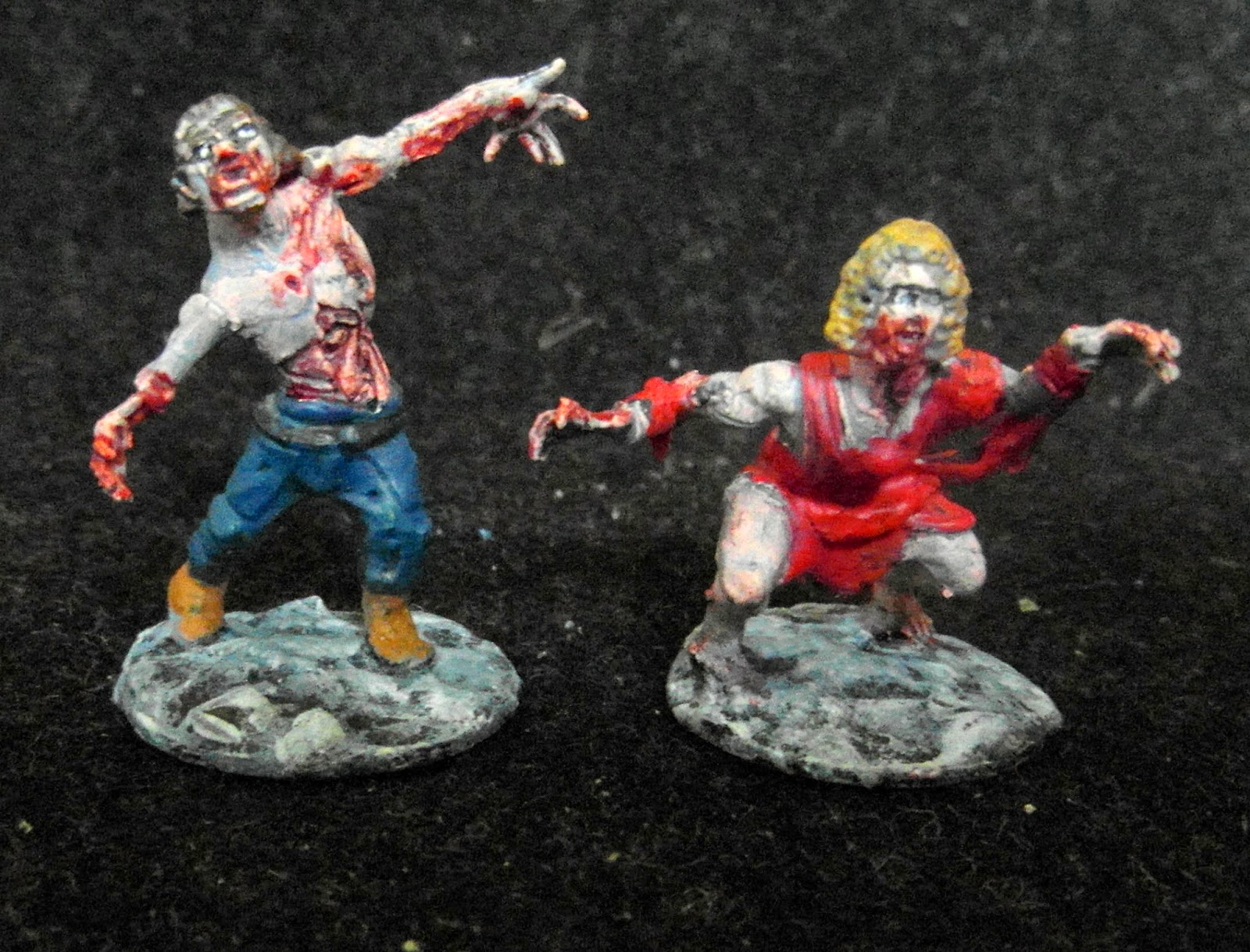 The final two both look a bit strange for many reasons, (not just the bad photograph).
The left hand zed just looks too animated for me, but it's probably due to the legs I've put him on (the mantic legs are all more squat-like).
The female, well, talking about squatting...

Still it's another eight zombies to add to my ever growing horde, bringing it close to about two hundred now, maybe I should take a head count ?

I'll take this opportunity to welcome my latest follower, Blaxkleric, whose blog Fantorical is well worth a look.
On the subject of blogs, I apologise if you have anything other than a straight-forward comment  box on your blog (atom, google+ etc), I'm very much a technophobe - I'm even reticent about replying when there is a 'captcha' request.
That's it then for this week except to say that as always your comments are both welcomed and appreciated.
Posted by Zabadak at 07:40 34 comments:

The Emergency Medical Services that should feature in the early stages of every zombie apocalypse game, are sadly not represented by many (if any) suitable figures, (along with the firemen -US or British).
There are however British medical teams - available from Warmacre |Game (a very underrated range of excellent figures). They have two paramedics in the set along with four British bobbies for £6 !
I therefore set out to make my own and converted a couple of figures from plastic "kits" that I have  acquired over time (the latest being two sprues of Wargames factory Survivours and a nearly complete spure of their weapons !).
The figure on the left though has a Studio Mini's zombie plastic torso and arms from goodness knows where, though I suspect they're from the Wargame factory zombies.
The case he is carrying is scratch-built from a central body of cork with slivers of cork for the end and side pockets. The handle is a very small staple, straightened out then gently curved and forced into the cork, as it's a very tight fit it didn't require any gluing.


A quick googling of US, EMS crews revealed that they generally don't look like our own green overalled  paramedics, but are uniformed with more in common to Amercian Police forces with a very similar uniform of black trousers and shirts. I did however find a couple that wore white shirts with their black trousers and plumped for that.
The Hi-vis vest is inherent in the Studio Mini though it's meant more of a college -type jacket. as I later found when painting it, but I think it does the job.
Blue plastic gloves feature a lot with paramedics and I thought it helped break up monotony of the figure along with the red medic case (also found by googling).

For the second figure I used the torso from the survivours boxed set (intended for the cop-type character) with suitable arms  - Right handed arms with open hands are quite rare as most are carrying a weapon of some description or have shirt sleeves etc.
I had intended to use both the cop torso I had at my disposal, for these but I'm pleased now I used the Studio one.
Other than varnishing, I'm happy that these are as finished as they will ever be, they look distinct enough and are fit for purpose (well for my purposes anyway) and at least it's another two figures off my current painting tray.

My gaming table is currently in a state of flux (OK, for in a state of flux read - "it's a mess) following the gluing, converting and basing of figures and as I continue to work  on the doll houses.
Whilst I may not be officially participating in Zombtober, these two may well keep someone from Birmingham bugging me (mentioning no names) and I may have some actual zombies finished by next week too !

Finally let me welcome my two latest followers R.A.E. Gingerbhoy and Arabianknight both of whom have very good blogs.