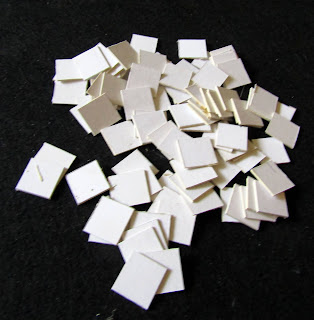 Four leisurely sessions of an hour each, saw me finishing the fifteen remaining Atlantic Afghan  figures destined for service as Slavers in "Jimland".Normally I don't paint on a weekend, but wishing to finish the figures I left the last one hour session to Sunday, taking a mere four hours to finish due to family interruptions for Father 's Day  "Celebrations" (cups f tea accompanied by cake and the opening of cards).
The photograph above shows the fifteen completed figures and the one to the left shows their rear view.

And that's it for another week and for all that I've finished these figures I do feel that I haven't done that much, considering they were very close to being finished at the start of the week.
The next week will see me cutting bases for the "Perry" ACW Zouaves, gluing the figures  together (ugh)  and mounting on bases. Additionally I received an extra command sprue from a chance visit to  Ebay , maling me a very happy bunny!
To me, these plastic figures feel very flimsy, unlike solid metals that only lose their bayonets and swords ! Time however will be the test as whether they are fit for purpose or not.

Thanks for taking the time to visit, hopefully there was to tweak your interest and of course your comments, witticisms, critiques, bouquets and brickbats are always welcomed and appreciated.
Posted by Zabadak at 05:24 10 comments: 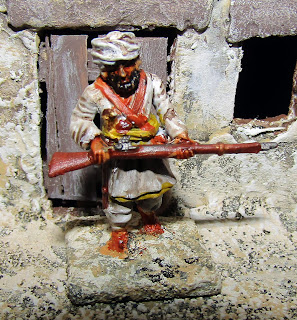 I did my usual hour or so day's painting n the first twenty "Atlantic" Afghans, but by Saturday (and after three one-hour sessions I came to the realisation that I was never going to get all twenty finished in time for today's post.  determined to finish something, I concentrated on five figures and after another three sessions on Sunday, here's the results.
As an added bonus, there's an unusual amount of slightly blurry photographs and a lot of padding (mostly rear shots, save for the chap on the right!)
The chap on the right was the first that had been glued together and whilst al of these five were all a bit rushed, they're good enough for my purposes.
Even with my new brushes, I have to admit I'm not good at painting figures (or painting most anything else for that matter).
On to the pics ! :

So five figures in a week at this rate I can have a unit in a month !
Whilst I hate painting figures, painting non-uniformed ones is an added pain, give me a couple of hundred regulars every time. I could have gone with a basic white, as per the box illustrations, but I wanted a little more colour though I have tried to use earth, subdued colours.

Over the next week I will continue on with the remaining fifteen that will be sufficient for my "Jimland" needs, the rather blurry photograph on the right shows their current state.

That's it then for another week, hopefully there was something of interest and f course, as always, your comments are both welcomed and appreciated.

As a change from the monotomy of completing my remaining market stalls I decided to tackle the newly arrived "Atlantic" plastic  Afghans. After much cursing a little frustration I managed to cut. file  and base up twenty figures, initially for deployment to 'Jimland' for use as Slavers, for whichI will only ever need 10 rifle armed and 10 melee armed figures .
The centre figure in the photograph above was the first figure to be assembled and took about an hour ! The next nine took another hour and the final ten about the same. Some poses do look a bit awkward, but I'm OK with that.


For some reason I failed to photograph the other five swordsmen, but here's a rear view pf the 'second ten'
Overall I was happy enough with the figures, but can't help thinking they'll need an input of metal figures to round the force of (probably from "Artizan", "Old Glory" and "Perry". A mountain gun and some a few obvious leader types are high up on the list should I make an Afghan force. I have half of the first box and another complete box of these figures, so can make up another 60 figures, but will aim at getting these twenty painted up first.

Finally here's a photograph comparing one of the 'tallest',  'Atlantic' Afghans to and one of the tallest 'Old Glory' Brit. (unfinished)
I'm much happier now to tackle the other plastic box sets I recently purposed, though I did have a couple of broken swords, a lost arm and very sticky fingers after assembling this lot, it was a lot easier than the basing and inevitable painting that will follow!

Thanks for taking the time to visit, I know it's not a lot to see  but it's  all I got this week!

That's it then for another week  and as usual I'll get around to catching up on blogs I normally comment on, and as always your comments are both welcomed and appreciated.


Postscript: Is anyone else NOT looking forward to any changes Blogger may make this month. ?

Yes, I am presenting another couple of stalls and yes it is a poor pun.
To be fair, the second one isn't completely finished and still needs a canopy (awning ? cover ?), but it does fill this post out and allows me to show it again in another post with awning !
Other than the "Eureka" 28mm figures both the models and their contents were scratch-built from the inevitable bits and pieces I have available and hoarded over the years.
I think it's pretty obvious what both stalls are selling and I've included pics of both before and after canopying  (that's a word  right ?) to enable viewing of their contents.
First up the pottery stall before having its canopy  fitted :
﻿   The other completely scratch-built (sans canopy):
The stall is for cloth, sadly I haven't thought out how to get a figure behind the counter before I add the canopy !


I did manage an hour a day (at least) to finish these and TBH I'm really sick of these and will be pleased when I've finished these.

In good news my Afghans arrived this week and they do look good but I can't say I'm looking forward to the hell that will be assembling them, let alone having to paint the damn things - but needs must I guess.

So that's it then for another week, thanks for taking the time to visit, hopefully there is something here of interest and as always your comments, criticisms, bouquets and brickbats are always welcomed and appreciated.