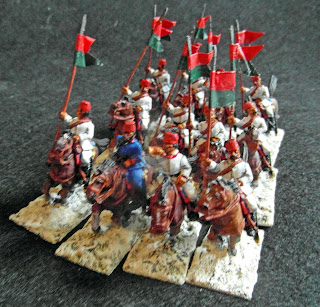 After a hectic week's painting I've finallyfinished painting my Egyptian Lancers (for the Sudan).
Like all the other figures that I've finished (and safely stored away) they still require varnishing  and I have the spray varnish ready and waiting for when I finish the remaining figures I have for my Sudan project.
Finding information about these lancers was pretty difficult and I don't think it was my google-fu letting me down either. All the information came from a single, well illustrated,  site on the Ottoman armies.
The figures are all OG and are a peculiar mix of iniform styles, probably relating to the many uniform changes over the last twenty or so years of the nineteenth century. There were many lancer units  with varitions on the pennant (though all have a red upper half afaik).

They're based singly for "The sword and the Flame" rule set (now coming up to its third edition in a special 40th Anniversary edition), which is like rules Marmite,  (I like the former and hate the latter - just in case anyone is interested [ They're nor- Ed.])
As Imperial troops they have an Officer and a NCO plus 10 lancers, whilst 'native' forces generally have a single Officer/Leader and eleven rank and file.
They may have been a long time coming, but at least they're good enough for my purposes and maybe they will see action one day !

In other news, I missed a clinic appointment by ten minutes, so it's been delayed until next month (insert sad emoticon here)  to join yet another  hospital visit. Looking on the brighter side, I have made a lot of progress on my Egyptian infanry, all of whom should be completed in time to be the subject of next week's blog post (insert Smiley face here).

The above was the good news, the bad news was that I lost my camera last week (Wednesday to be exact)  and I've had to resurrect my old camera (a task that took a big chunk of time Sunday and today) - finding it, finding a Sim card (with space),  charging its batteries and remembering how to work it and download the photos !. The saddest part of this affair was the loss of the photo's of my friend's expedition into Jimland, though I'll recreate a few.

Finally a big thank you to those five invididuals that commented on my post last week, it was the lowest number of comments I've ever had on a post iirc and although I tend not to take much interest in blog numbers (followers, posts, comments etc.) it was noticeable.

Once more, that's it for this week, thanks for taking the time to visit, hopefully there was something here of interest  and as always your comments are both welcomed and truly appreciated.

Despite having to attend the hospital for an entire afternoon and a routine clinic vist this last week I did manage to finish off the six English Mounted officers for my Sudan project.
The six officers are all Perry miniatures and all are British, three regulars and three commanding Egyptian forces.
I managed at least an hour's painting each  day over the last week , which has meant that the rest of the cavalry is well underway to being completed too and I should have either the Egyptian Lancers or the three Dervish command group figures finished by next week too - 'yay'.

In other news:
Saturday saw my friend take on the wilds of Jimland on Saturday in a very entertaining game, which I'll be posting about sometime in the near future, hospital and Clinic appointments allowing and of course all the other real-life impediments to our hobby not getting in the way either.

Thanks for taking the time to visit and hopefully you'll have found something of interest.

That's it then for this week, as always your comments are both welcomed and truly appreciated. 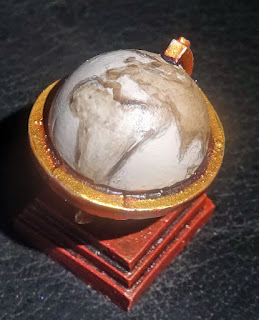 Despite only a single routine clinic visit last week I still managed at least an hours hobby-related session each day and still managed to not complete a single miniature ! IThe latter isn't completely true as I finished twenty horse ready for their riders. The photographs of before and after can be seen below.
I do have a single completed model, though not completed by me ! A friend offered to paint this piece for me as with my current failing eyesight I couldn;tdo it justice. The finished piece, a globe of the world (shown right) was painted to look like a 19th century one and will be part of the furnishings for "Gordon's Palace" , when the palace is finished.
There is slight damage to the piece, but I can't recall when it was done, nevertheless it's a fine piece imo and I'm very pleased with the overal effect.
In other news the chap who painted this for me may well turn up this weekend to experience the 'joys' of an adventure in "Jimland".
Overall though I am very happy with it and it's far, far better than anything I could have managed.
Here's a couple of photographs of my other works in proigress ("Padding"- Ed.)
it may not seem a lot, but just the bases on the inkfantry took three hours for the two dry-brushed coats of paint.

So Ive made some  progress and it may be not as much to post about as one might want but I realised that last week was the closest date to the anniversary of the start of this log ; eight years later and some 411 posts later I'm quite pleased I'm still managing to post anything !

As an aside, I've just noticed that my blogger isn;t allowing me to splel-check, so apologires for my normally rubbish typing.

Thanks for taking the time to visit, hopefully there was something of nterest and of course your comments are always welcomed and appreciated.
Posted by Zabadak at 04:36 18 comments: 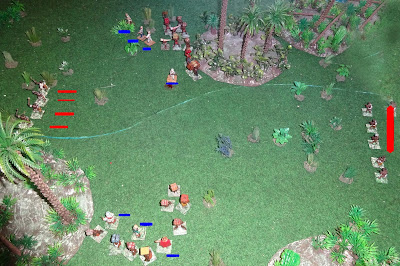 Once more, thanks for taking the time to visit and as always your comments are both welcomed and appreciated.
Posted by Zabadak at 04:38 20 comments: