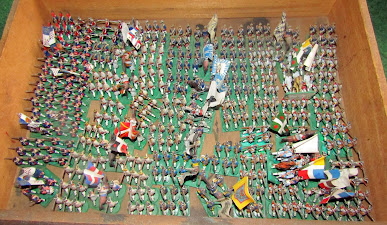 I never intended to have to ever paint a French army, as my friend had a larg collection of them, but when we decided to do Minden and totted up the number of battalions we needed versus the ones we had (even with using my Austrians as French and my Prussians as Allied forces) we needed aquite a few more.
I had the figures and got to work, these are the results - another two dozen or so extra French battalions of foot.
The French wore, for the most part, grey/white uniforms, but they do have a large contingent of mid-blue, dark blue and red-coated battalions/regiments.
Rather than show the rather boring (imho) regular grey-coated battalions, here's some photographs of the others and a selection of flags:
The flags of my four grenadier battalions have the flagstaff on the incorrect side of the flag - I blame Pengel and Hurt, the lack of information available at the time, my youth and enthusiasm, bad eyesight etc. for the error.
I knew I'd painted a four-battalion French Regiment, that wasn't in the drawer and had to dig out another box that I remembered using for transprtation:
So my French forces, from nothin, had risen to be the numerous force I have, with somehwere in the region of three dozen battalions of foot, all for a single battle.
The French and Hanoverians were the last figures I painted for my 7YW arnmies, some twenty plus years ago, but they all did see service on the table-top, ven if fot just the one battle !
Having, more or less, shown all my infantry forces, next week I'll show the Cavalry - there only  drawer and a half of those !
Sorry it's been  bit of a boring journeyfor most of my followers and visitors, but it's all I got !
That's it then for another week, apologies again for my self-indulgence and as ever your comments are both welcomed and appreciated.
Posted by Zabadak at 05:28 14 comments: 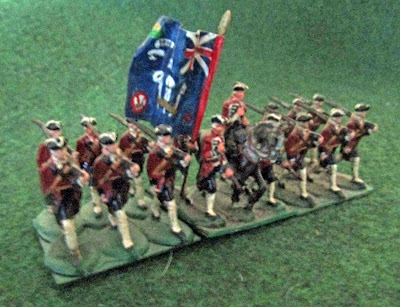 The redcoats I'm referring to in this post are specifically the British and Hanoverians in the 7YW as there are other red-coated regiments from other nations.
My British forces were orinally destineded for the French-Indian wars but that particular diversion never occured as I found an unexpected interest in the 7YW and in particular the Austian- Prussian theatre's confliuct. The British' meagre six battalions were then shelved  for many years.
They did see action though in a recreation of the battle of Minden !
(Photograph on the right represents the battalion of Welsh Fusiliers present at the battle and was a repaint iirc)
Trying to do Minden, even with my Prussians standing in for many of the 'minor' German states  meant we'd still be short on the Allied side for our re-fight and hence my Hanoverians were born !
The Hanoverians also had two battalions of Guradgrenadiers in their ranks, which were duly represented by botha Spencer Smith and a Hinchlciffe battlion
In our refight- the British advanced beyond their allied right flank cover and were immediately smashed by horders of  French Cavalry! On the Aliies left flank the French counn't hit the proverbial barn door are were all but annihilated !
The main action took place on a sixteen foot long by six foot wide table with the Allied left flank action taking place on an eight foot by six foot table attached to the main one, making a 'T' shape. ABout eight players fought across the tables over two days
Sadly, to my  knowledge no photogrqphs of this game have survuived, if indeed any were taken at all (it was well before the days of digital cameras etc.)
Next week I'll be showing the infantry of my final 7YW army - the French, who were yet another painted army, specifically for 'Minden'.
That's it then for this week, thanks for taking the time to visit and as always your comments are both welcomed and appreciated.
Posted by Zabadak at 05:38 16 comments:

Following on from last week's post of my 'ancient' Prussian 7YW army I dug out the drawer containing my Austrian army, though I also had to dig through another drawer to find their Grenzers.
All but the Grenzers are once more Spencer Smith figures, bought in the early 1970s and hve fought against the Prussians in many, many, battles. The Austirans have also doubled as French in our refight of Minden, with the Prussians standing in as Hessians and other 'minor' German states.
The photograph above shows a single battalion of Austrians, with an extra base of figures representing their far bigger battalions than most other nations'.

On a separate note, the Austrians, all but about two regiments, were not painted by me, but by a friend (now,  sadly, living across the country and no longer playing wargames).

Finally the drawer they all 'live' in:
So that's it then for another week; next week will see my collection (drawer) of British and Hanoverians - the redcoats are coming !

Thanks for taking the time to visit and as always your comments are , as always, both welcomed and truly appreciated.

For the last two weeks, I haven't lifted a paintbrush or a craft knife and other than reading a few blogs, I've done nothing hobby-related at all.  Last week I was ill, had a routine clinic appointment and a funeral to attend and was in no mood or fit state to post about anything.
As I'd like to get to the tenth anniversary  of my blog (next February) before deciding whether or not to continue blogging I reckon I can post about my Seven Years' war collection over many posts.
This weeks post's subject is my 7YW Prussian infantry.
The photograph shows the 21st Regiment, battalions one and two.
These figures are amongst my oldest figures that I still have; they're Spencer Smith's 30mm plastic figures (as seen in Charles Grant's "Wargames" and Brigadier Young's Charge). I last used these figures around twenty years ago though they were painted almost entirely in the early 1970s and they're definetly my most used armies, representing my favourite historical period.
Initially I bought some of these figures for the French-Indian wars but the small initial purchase soon ballooned into something much larger.
IIRC, for the princely sum of £1.20, you got a bag of 40 musketeers, 20 grenadiers, 10 drummers and 10 officers on foot
(they're all in metal now and far more expensive).
The number of grenadiers meant I always had an excess of these figures and a lot were 'converted' to fusiliers with just their grenadier caps cut vaguely to shape.-
- I have two regiments of fusiliers !
I'd also worked out that a bag of 24 mounted officers worked out cheaper than more infantry (and  yet more excess grenadiers), so a mounted officer was placed in the centre of each of the regiment's battalions - saving four infantry figures! The officers had a flagstaff placed though their hands and a drummer was also added to each battalion  (I also had a surplus of drummers).
In those days, block painting with enamels ws the order of the day and black-lining was the in vogue painting technique (i only did the former). Basing was dark green 'grass' and little else as the aim was to play a game not to become a master painter. The latter doesn't show up well as the figures have accumulated dust over their years of inactivity.
In the Prussian army of the era the grenadiers from each regiment were removed and amalgamated with another reiment's greandier to form a grenadier battalion, so I needed only one battalion of grenadiers for every four battalions of musketeers.
Overall I have about 24 battalions of foot, plus four battalions of grenadiers, though in my re-fights each battalion was normally counted as a regiment. The battalion artillery, was represnted by a single arillery model.
For me,also  this was a great trip down memory lane, hopefully there was something here of interest to anyone else reading through this.
Your comments, of course are always welcomed and appreciated.
Posted by Zabadak at 07:16 18 comments: