In a week where real-life overwhelmed any desire to do anything hobby related, I was  idling on an  internet  site reviewing many Western Skirmish rules and came across "Shoot n Skeddatle" as a free downloadable PDF and thought Why not?". 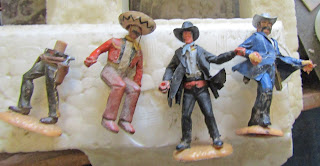 [[Some of my 'Desperadoes", that's the seated mexican's legs on the left]

The rules are a whopping 80+ pages long, in this second edition and contain all the necessary rules fro playing a game, but not all the necessary items, namels Cards, lots of Cards, which are available as seperate, buyable, downloadable PDFs or actual cards. - bummer !

The cards relate to Characters - Lawmen, Outlaws, and Other (neutral) Characters; and Weapons - everything from Derringers to cannon -the whole gamut of Western ordinance.

Movement is pretty straight-forward with fixed ditances for walking running etc. and various actions are also taken in to account (opening doors, jumping walls and so on). Movement order is done using two decks of cards, each character aving a card allocated to them. The Doc below, fo r example is activated on the draw of  the Jack of Clubs. The turn ends when all characters have had the chance to activate twice. There is, of course, the chance to make your own characters rather than using the pre-genereated card ones. 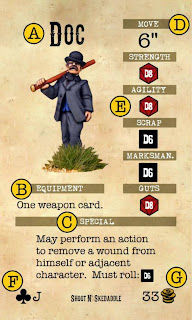 With the varuety of skills (that everyone has), there is a much better chance of individual charactersiation than I found in TRWNN.

Where SnS scores highly compared to TRWNN is their 'extras', there are scenarios given, a campaign system and imho, everything has a cost, whether it be characters, weapons, horses or anyting else! 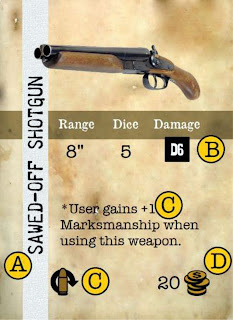 [One of the many weapon cards, showing its cost is $20 - toom right]

The only feature I didn't take to was the simplified wound system, one wound and your hurt, two wounds and you're out of the fight, not outright 'kills'.

Without playing a game using these rules it's not really possible to give an idea of how much fun they are or whether or not they'll give a good, fun game, but I'm pretty sure they'll have a lot of followers.

My overall opinion on the rules is that they're a pretty solid set of rules with a lot of good features, I like the characteristion structure, more so than in TRWNN and my old "Old West" rules, and the intiative (using playing cards) does mean all characterst get the chance to act, but the wounding system is lacking  and I prefer the TRWNN system. (I'm pretty sure they latter could be easily combined)

That's it then, a quick and dirty post (sorry), as the current real-life situation wears on I realised I haven't played a game since March this year - a solo Jimland adventure and I've only played with three others, in some six games (or so) in the last three years! It's all very depressing and does little to generate any enthusiasm for anything hobby-related.

Thanks for taking the time to visit and as always your comments are welcomed and appreciated.