I've made a lot of progress over the last two weeks on the production of buildings 6,7, and 8 of my current build (building nine was the arched building).
The builidng, from left to right in the photograph, are nicknamed, the shack, the jail and the blue building. They have a footprint of about 2' x 8" (60cm x 20cm).
The 'shack' beacuse of what is is - a shack ! The jail, becuase it held some of villagers as prisoners and has bars on its right front window, whilst the plaster on the last building has (read will have) a bluish tinge. The arched building will be to the right of this block.
Here's how I got to where I am at currently:

And that's it then for another week. There;s still  a lot to do on these three buildings, window frames, doors,  roof assembly and probably a host of other stuff that I haven't thought of yet. Painting will follow in due course when I complete all eight (or maybe nine) buildings at some future date and some of the other scenics still need doing too - walls, a well, more walls, hay stacks, corn cribs a walled in tree (?) and probably a lot more too.

Thanks for taking the time to visit and hopefully you've found something of interest.
As always your comments, are always welcomed and appreciated
Posted by Zabadak at 05:28 16 comments: 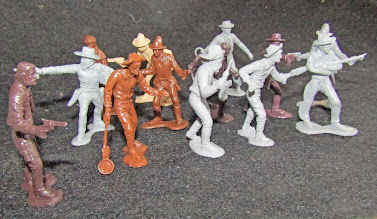 I recently purchased a small collection of 33 figures from Evilbay for the princely sum of £25 (incluing postage) which worked out at about 75p per figure - a lot cheaper than some plastics!
They are all old 54mm Marx figures (probably recasts) in three colours (tan, brown and grey) and although there are a few duplicates (easilty modified for the most part) there are a lot of single, individual figures.
The photo above shows a small selection of the figures.
Here's photos of them all showing a figure's rear view where there are duplicates:
I'm more than happy with these wonderfully detailed and proporioned figures - no larger than life guns etc. 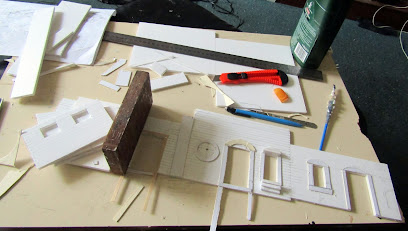 I haven't spent my week merely opening a box of figures and taking  photographs, I've been busily working on my next three buildings, making great inroads into finishing them. I guess I'm more than half-wy through the build, but carving bricks into foamboard takes a long time !
The photograph on the right shows an early stage in the build (I've done a lot more since it was taken).
I've used all the scrap from the previous build, but will need another A2 sheet of foamboard to cut out a roof about 7" x 6" as I don't have a bit of scrap big enough.
At the rate I'm going it should be finished by this time next week (fingers crossed) and a report on the build will of course follow its completion. I did miss a whole day due to an excursion (obvioulsy game related) and will report on this in a future post.
That's it then for this week, hopefully there was something here if interest.
Thanks for taking the time to visit and as always your comments are welcomed and appreciated.

With a lot of effort on my part, getting motivated, I managed to finish the building aspect of my Arched building (shown right in its 'before' stage.
A lot of time was spent in the many boring, repitive tasks of cutting out seemingly hundreds of flat tiles for the roof parapet, or cutting and placing individual stones for the arches and individual cutting and fitting of reinforcement 'planks' for the fourteen doors.
Here's the photos :
The arches were made from the thickest card I had, then cut into individual bricks and stuck to the building.

I'm very pleased with the progress I've made with this model, it was a strugle, especially with all th necessary cutting of small bits.
I've used quite a range of materials for this model, foamboard for the walls, matchstick for the pillars, card for the arches and corrugated card for roofs. The parapet was made from scrap 2mm mdf, cut into roughly 1cm x 1.5 cm rectangles - all four hundred or so of them ! Evostick wood adhesive (undiluted) was also used throughout..
I remains to have the filler added on columns etc. and of course same texturing on the walls, before finally being painted - though this will probably be put on hold until all eight (or nine) buildings are completed.

Along with making this in the last week, I have been planning the next three buildings, all to be made as a single piece.

This week, I also took my life in my hands and nabbed a lift to 'Wilkos', grabbed a spray can of primer (though not my usual white) and quicly retreated back home. All of which means I can re-visit the painting of my first batch of Mexican banditos.

The final thing to report was a strange email from "The team at Blogger", who stated

- Strange because I had no knowledge of them evaluating it in the first place! The post was in early March and appeared in my blog list as a draft, as did the following one, "The Bear Essentials", but I've re-published both now. Maybe Blogger can't spell and thought I meant "Whips" and maybe "Bares" ? Maybe I'll be told that it too has been re-evaluated ? Who knows ?

That's it then for this week, thanks for taking the time to visit; I hope this build has been of some interest and as always your comments are both welcomed and truly appreciated.  I will get around to commenting on the blogs I normally comment upon, though Blaxx's Fantorical "Wix" website seems to hate me and won;t let me comment, despite my best efforts.

It's been a busy week at Casa de Zabadak, even with the disappointment of Tuesday !
Tuesday saw me sorting out a set of eight mounted and dismounted figures, matching the riders to their dismounted versions (that turned out not to be too difficult). When it came to undercoating them, my spray can of primer ran out, leaving me with half-undercoated figures.
I'm hoping to rectify the situation this week.
Being unable to start the paint jobs on the Mexican Banditos, I turnend my attention to working on the "arched Building", namely the pillars, doorframes and doors.
Here's the photographic record of my progress:

At a conservative estimate I've spent about 12 hours over the last week on this build and I still have the stones over the arches to complete, a tile surround on the roof parapet and two sloping tiled  roofs over the backdoors, so still a lot to do !
Once the above is complete the lengthy task of covering the whole thing in filler will still have to be done (and I may also re-cut the roof as it's not a great fit) and of course, it has to be painted - something I'm not looking forward to.
That's it then for this week, nothing finished (nothing new - Ed.), but I feel I've certainly made great in-roads into the completion of this model.
Thanks for taking the time to visit, hopefully boring wip pics were of some interest and as always your comments are both welcomed and appreciated.
Posted by Zabadak at 04:03 14 comments: