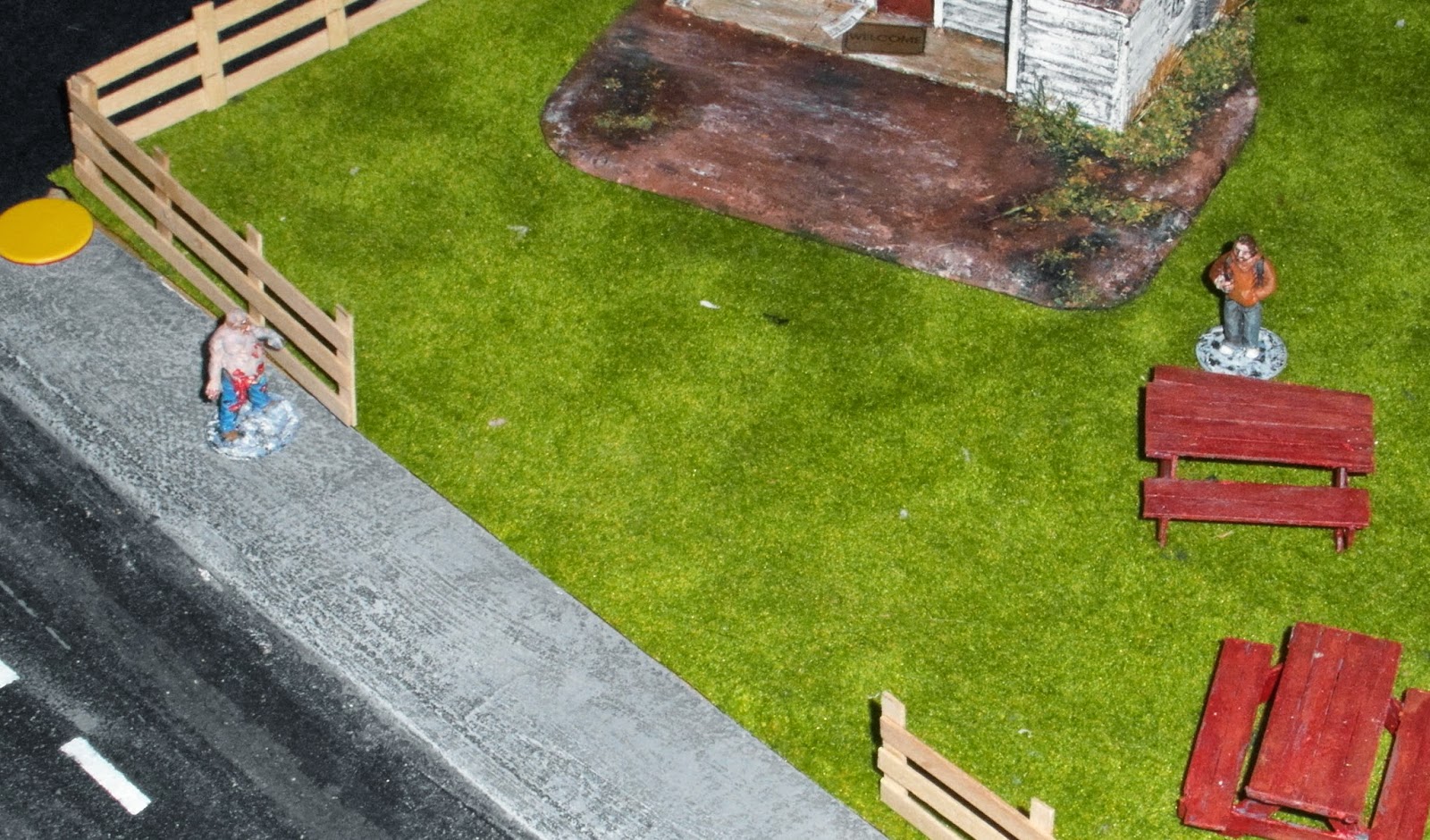 Our hero Mattias (Civilian, Initiative 4, Leadership and all other skills 3) is making his way towards the rendezvous point with the arrival of his pre-booked taxi imminent.
Elsewhere in the area, nothing much is happening although there is a very repugnant person staggering in his direction. 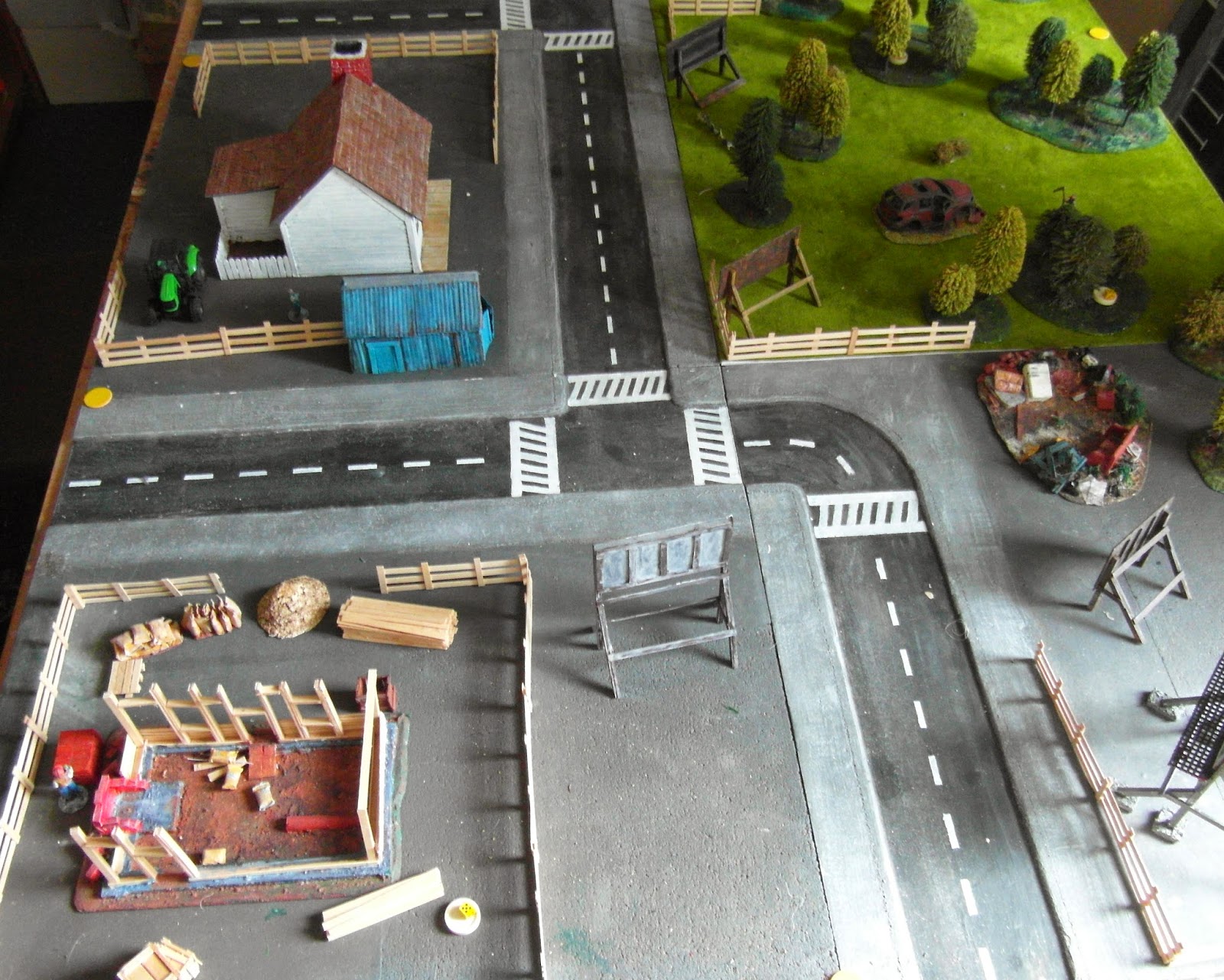 (The red car has sped off, not generating any new zombies and the closest  zombie is not within 6"for recognition.Two of the three PEFs (the two '5s') both increase their distance from Mattias and the three zombies present stagger slowly toward Mattias.) Bob continues to sup his tea, meaning he must obviously be British.) 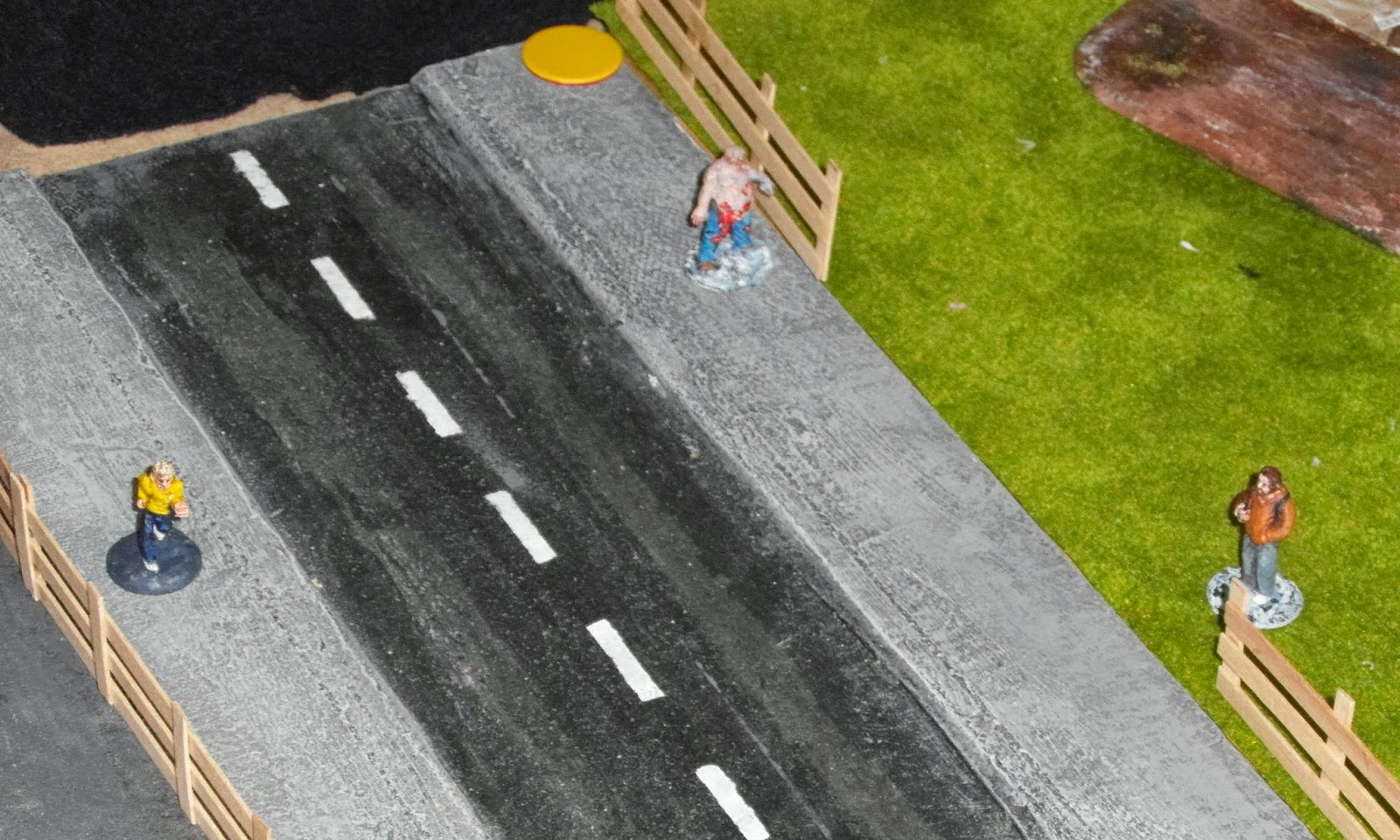 As Mattias makes his way to the exit he recongises the zombie for what the danger that it presents whilst a jogger comes into view on the opposite side of the table. Strangely the zombie is confused by this and remains unmoved.

(The zombies didn't activate, which I  took to mean the PEF's didn't either)

The taxi arrived at speed but would have to slow for the corner. 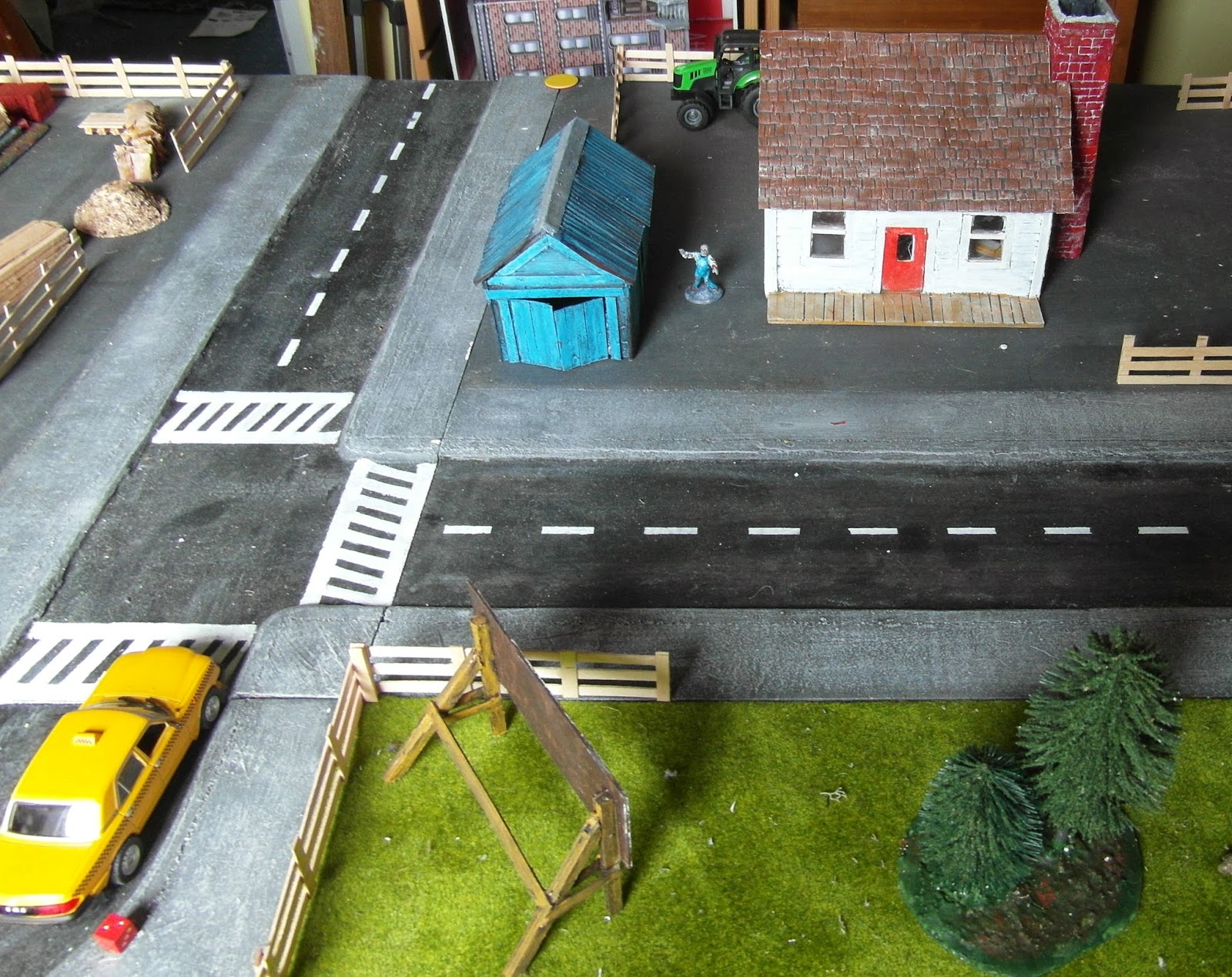 Whilst Mattias wasn't aware that his taxi's arrival would be very soon,  he decided to join the jogger and start running, whilst shouting a warning to the jogger.  Both he and the jogger were moving at 9" now (I have a standard movement of 6" rather than the 8" of ATZ).
The zombie had finally made his mind up and having decided that his meal was now getting away, he headed for the closer of the two potential snacks. 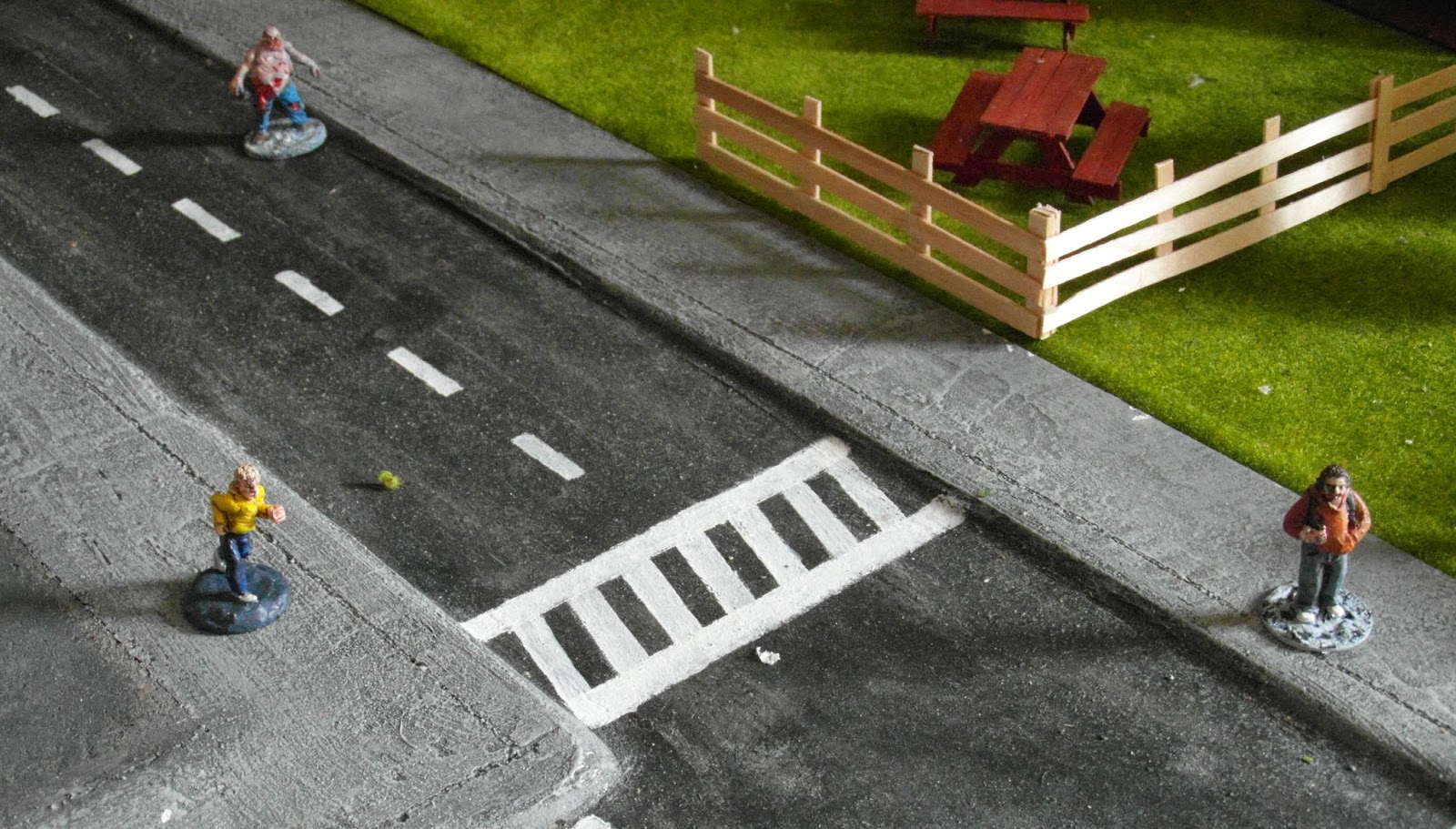 (Elsewhere the PEFs did whatever PEFs seem do in my games which was move back and forward to little effect.
The arrival of the taxi could have potentially generated zombies, but as elsewhere on the board, none were forthcoming. My 50% chance of at least one zombie being spawned  each turn (1d6 -3) had so far generated only one and
The "early" taxi arrival marked the start of only the third turn.) 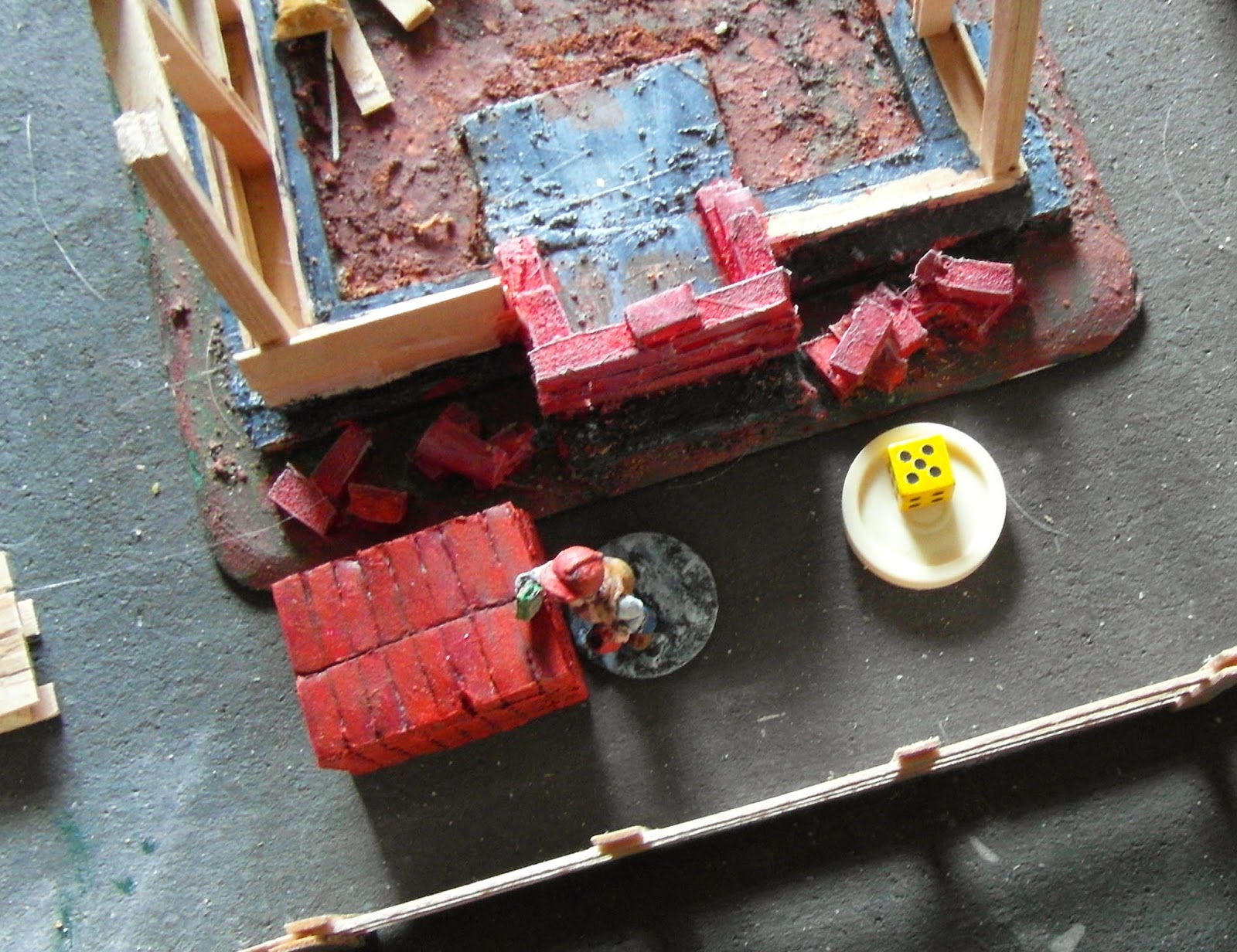 At this juncture we thought the scenario was all but done and dusted, however the PEFS decided they would attempt to participate. The one closest to Bob  caused him to glance over his shoulder and raised the ER of the encounter by 1. 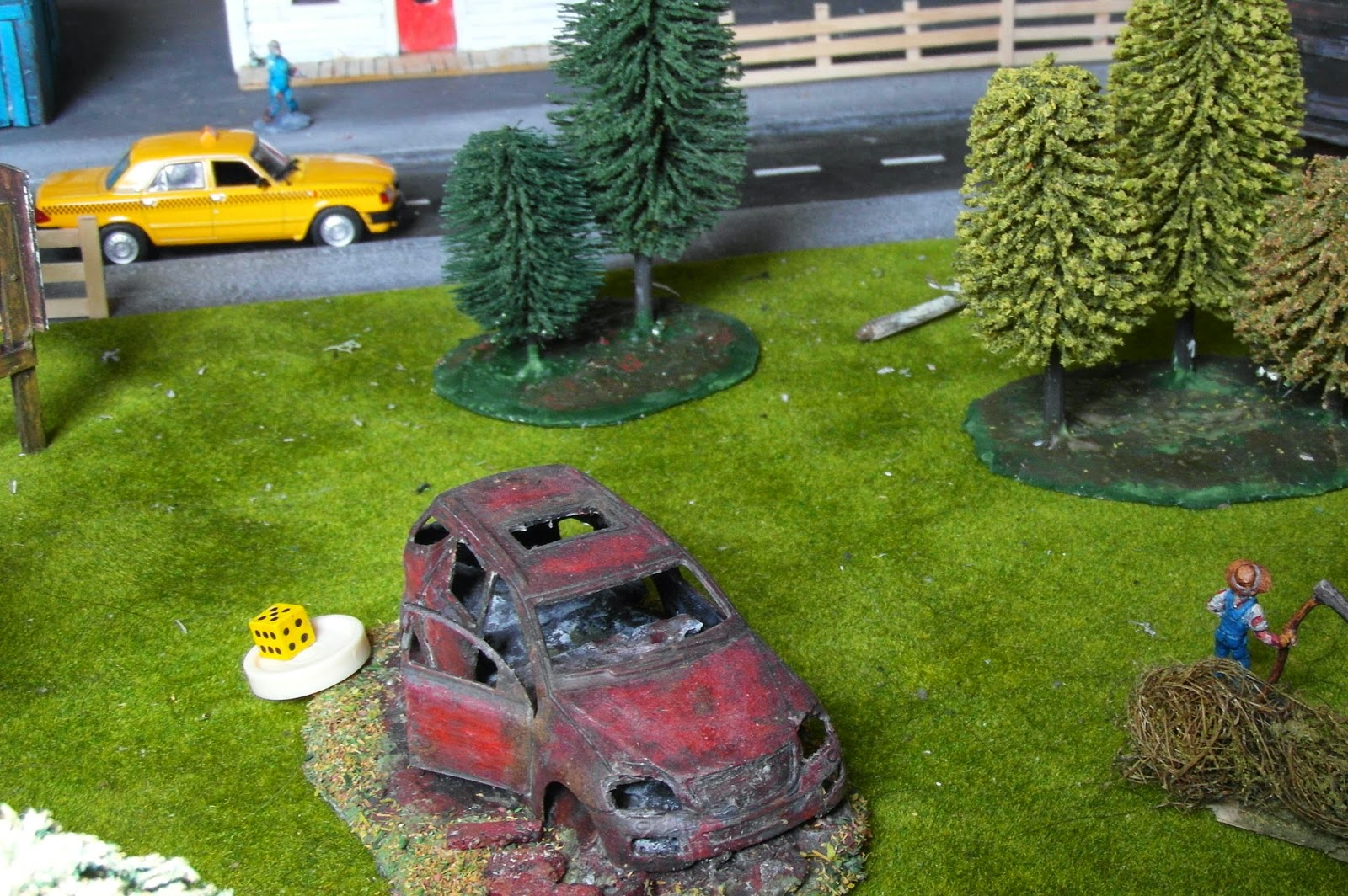 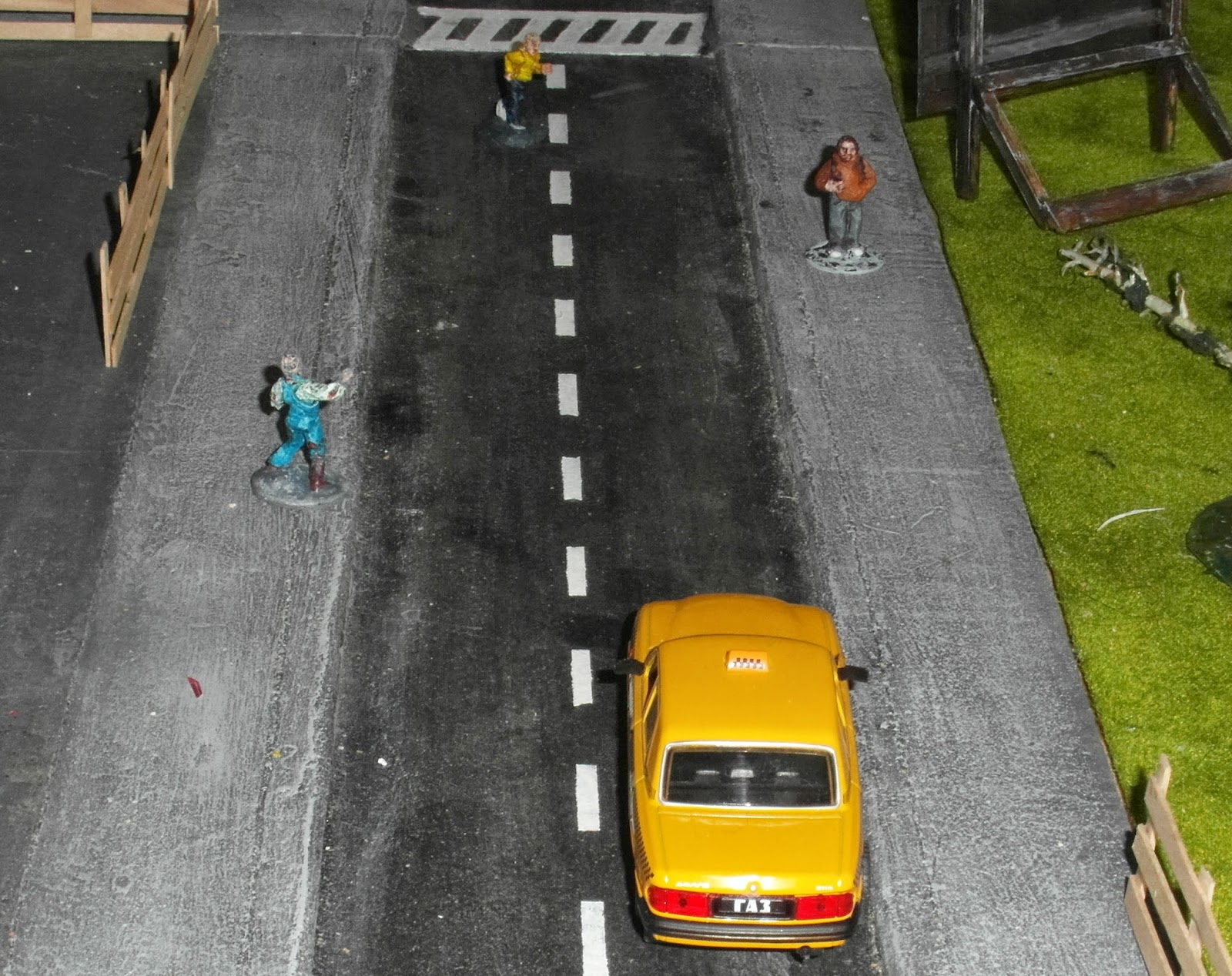 Mattias tried to put on a burst of speed whilst still shouting at the jogger, but even if he was still well short of the taxi and the jogger would catch up

One of the spawn points was depleted and wouldn't generate further zombies (not that it had anyway). 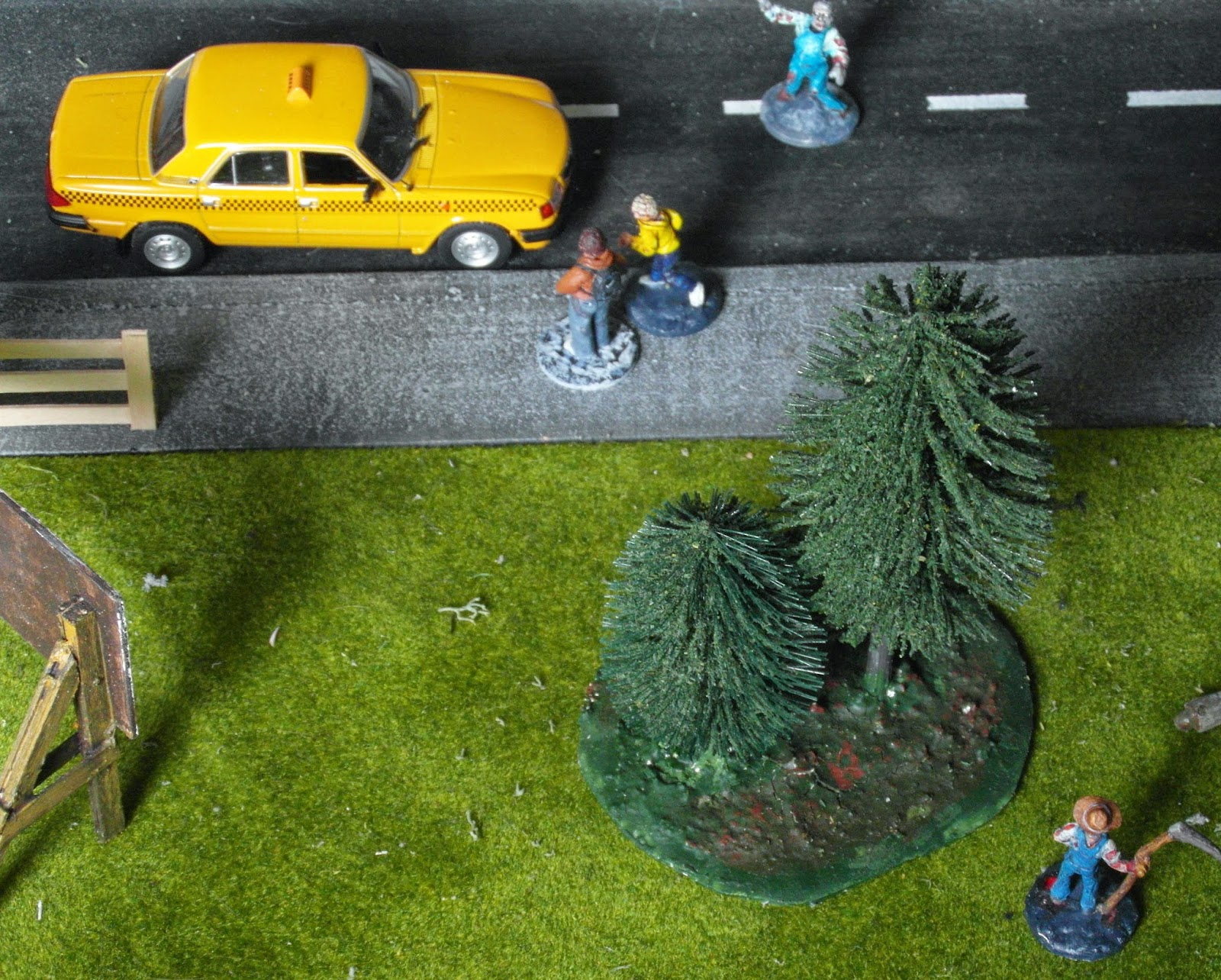 With victory all but in the bag, the civilians decided it was time to take a breather and rest whilst the zombies closed in on them making this turn quite tense.(they failed to activate_
The remaining PEF's in the woods added to the tension and both moved  towards Mattias, resulting in him being a bit spooked by the presence of some woodland critter (they were both revealed as nothing) The taxi closed the distance to the pair of breathless joggers but would take another turn to stop. before they could get in whilst the zombies were now closing in. 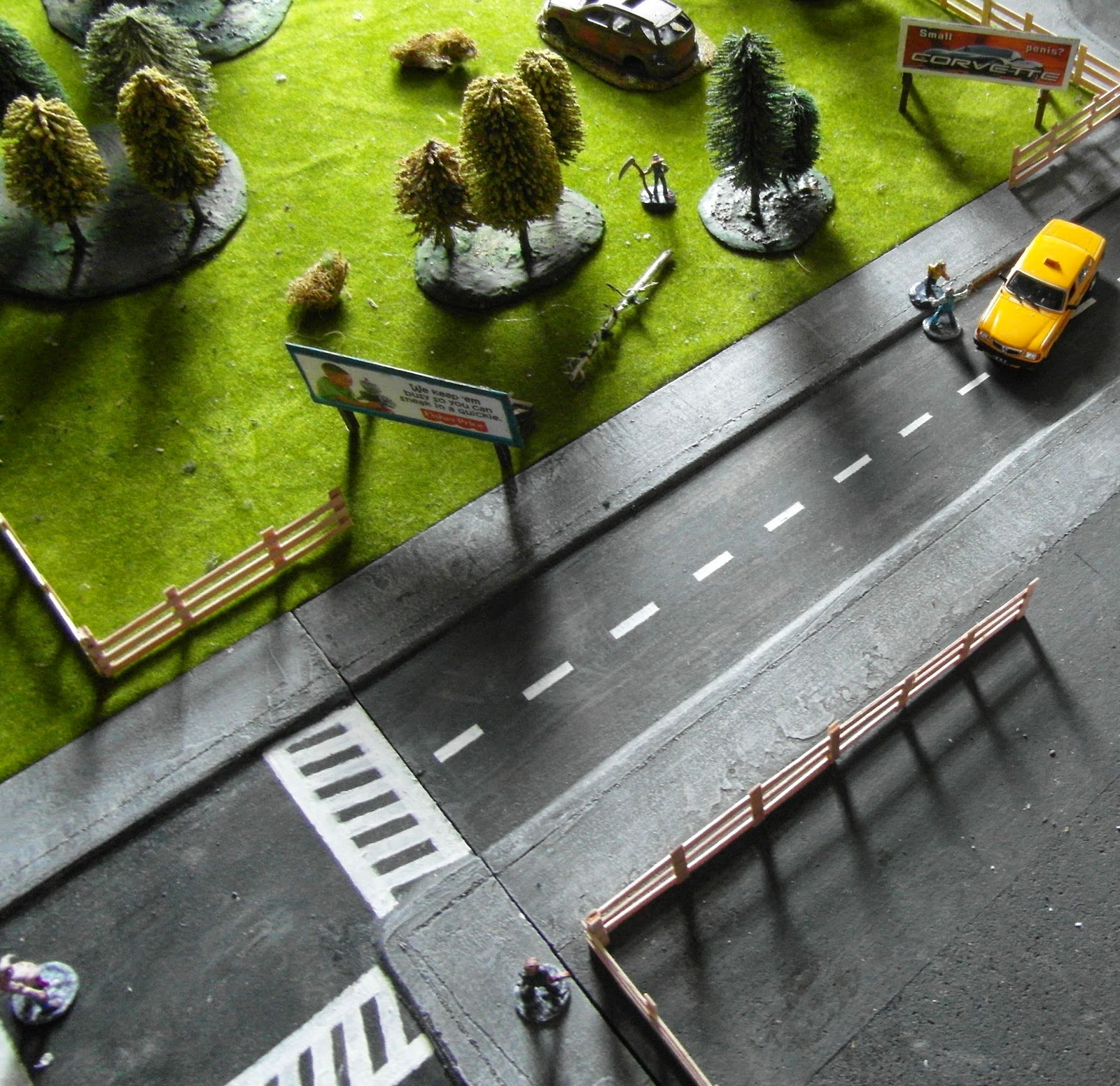 The civilians acted first in what would be the penultimate turn of the game, the taxi driver bringing his cab to a halt..
The closest Zombie attacked, resulting in the jogger whilst not pooping his pants, admirably fighting the zombie off with his walkman, resulting in them both being locked in combat.

As the melee wore on into a further turn, the zombies once more stood and watched, distracted no doubt by the inept dice throwing on display, however the Jogger was still locked in melee.  Mattias decided he had had enough and took the opportunity to jump in the waiting cab, as the taxi driver decided just to ease out from the kerb. 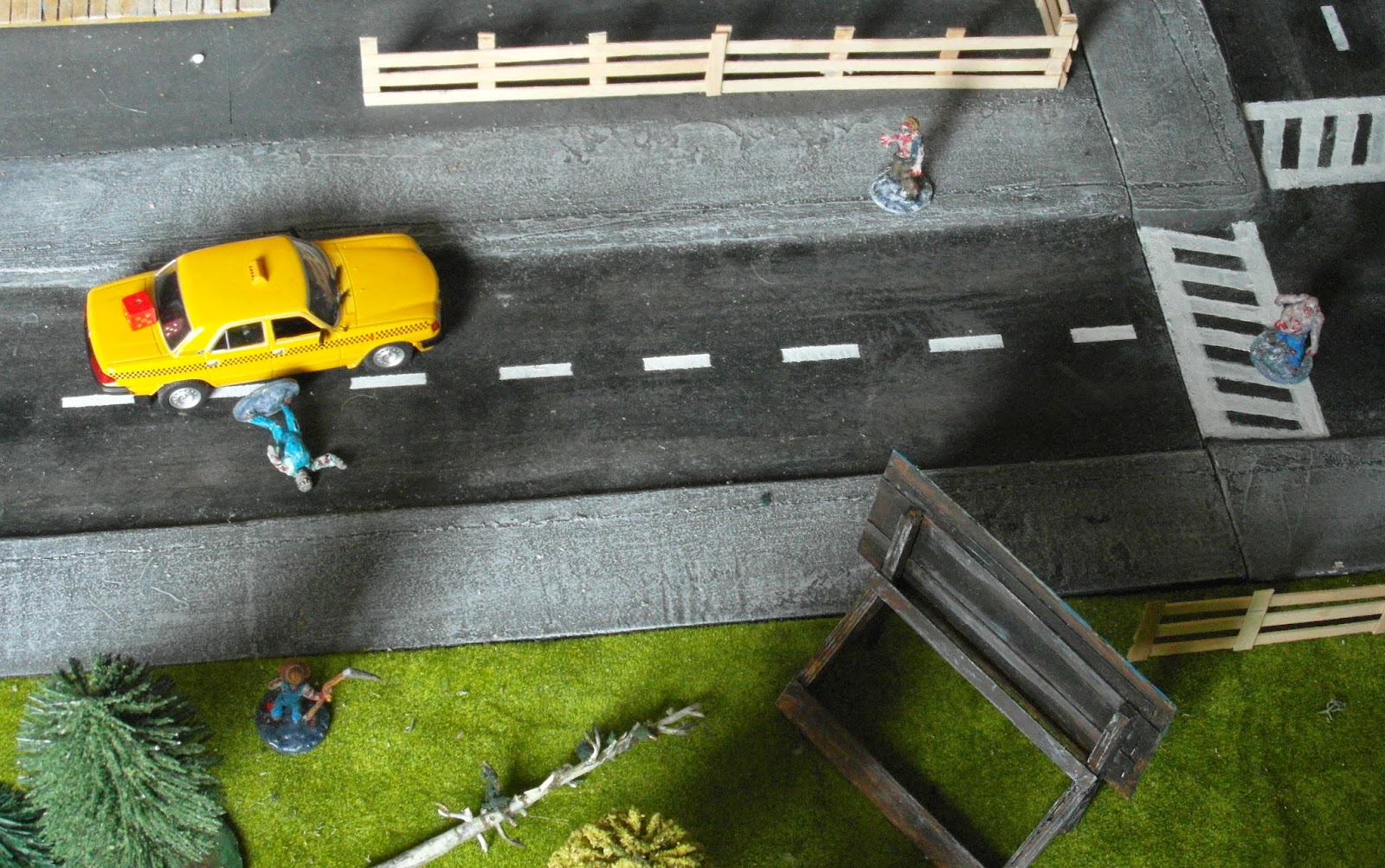 Right on cue, just as it looked like Mattias would pull away, the Jogger broke free from the inept zombie death struggle and headed for the taxi, not leaving sufficient time for the taxi to make anything other than a token movement away from the zombie, who in turn took the opportunity to attack the vehicle and bounce off in an undignified fashion.
As the taxi sped off into the blue yonder and safety, it did manage to side-swipe fat-boy before disappearing. He, of course, promptly stood up !

With that final action it was decided to call it a day even though there was at least one loose end still to tie up - Bob ! One of the few zombies generated by the noise of the taxi had spawned near Bob and had made its way toward him, but that situation has yet to be resolved (if indeed it will).

This was a relatively quick game (less than two hours), that could have gone very differently had the taxi not arrived so early in game, but it did give me food for thought as to how my version of the ATZ/FFO rules should be heading. The spawn points worked well and I'll be keeping that idea, but other experimental ideas hadn't and they'll be amended.

So who was the jogger ? (He's your average citizen with all skills at '3' save for a Fitness skill of '4' and no attribute assigned to him)

As always your comments are both welcomed and appreciated, as are your suggestions to naming the jogger !