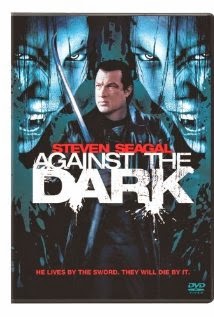 Well, another week, another week-end camping and another week to recover, hence this week I'm taking the easy way out and keeping this blog a bit short.
Firstly let me say I'm a big fan of Steven Seagal films, despite their consistent story-lines (the one man rescue against all the odds type of thing) and yes, they are all a bit cheesy.
This film, "Against the Dark" (2009) though was probably one of his worst, even though it had all the ingredients of a potentially good story-line, it was very disjointed in parts and was up there with so many other zombie films that just don't quite make it. Oh, yes, I didn't mention that it was a zombie film, which surprised the heck out of me too, Mr Seagal must have been a bit short on cash the weekend the film was made.
I haven't yet written this one up on my DVD/Film page but it'll get a score of '3', it does have a few moments and would have been a tad better with slow zombies imo.

Here are three of the last batch of figures I finished painting a while ago, but the problems I had photographing them would take up a whole blog page, so here's the short version.
Camera dead - charge it, no dice. Try for three hours eventually it charges, take photographs of last game and newly finished figures, quickly before battery dies.
Check lead, charger, ports, sockets and the weather, none of these seem to fix the problem.
Try to retrieve photographs from camera, but the lead still doesn't work, swearing doesn't help it seems. Techy #2 son comes to the rescue and shows me the sim card thing in the camera that can be taken out and inserted in a cunningly hidden slot in my laptop. Use my external drive to extract said photos from lap-top and feed into desktop where all the piccy stuff is stored and manipulated. Publish game blog and glaring at camera for a week - doesn't help.

I have other great news too, but as it won't be the same without a picture of two to accompany it there doesn't seem much point and I'll keep it for next week after I have had a good shout at the camera or made alternative photographing arrangements, which may well be a better plan.

So as many of you will be aware of, and recipients of, the "new and improved" Leibster award, I thought it would be a great idea to copy others in that rather than go through the whole rigmarole of answering the set questions and then answering other ones from the nominator I'll go with Lord Siwoc's idea of giving you all the chance to ask me a couple of questions.
Please make sure the question hasn't already been asked and just as a hint, I don't do music !

Finally let me welcome my latest follower Karitas who has a blog full of excellent eye-candy and as always your comments are both welcomed and appreciated.

(For those of you not in the know what a lucky dip is, there's always Google, but it seemed more likely you'd know what I meant rather than the title I was originally going for "A 10p mix-up", which is what all the wedding guests got after the service !)