A Day in the 'Burbs 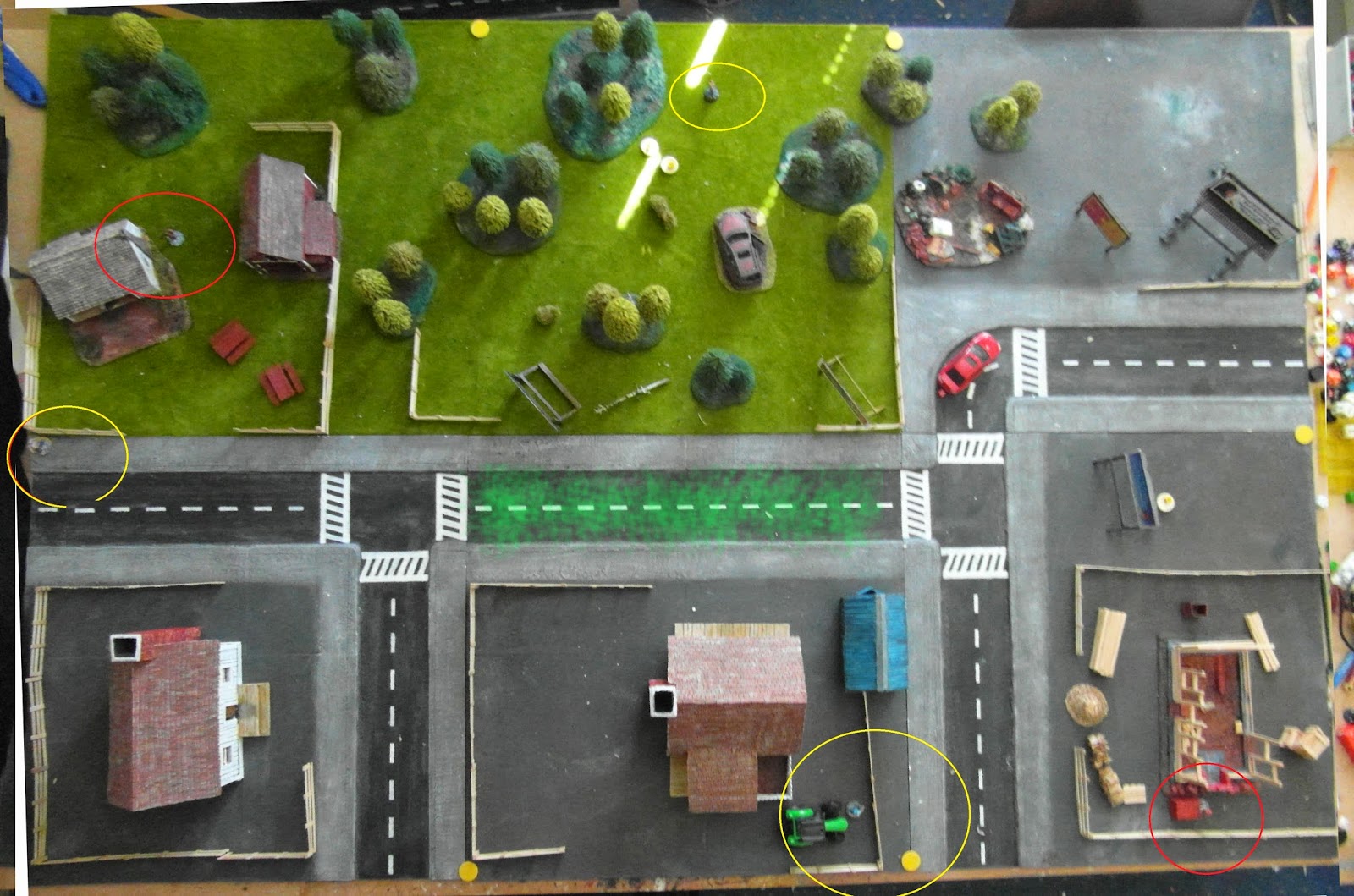 I finally got the enthusiasm up to play a scenario I've had set-up since November last year, the table being set up as a suburban area of Perdition, called St. Mary's Heights, which borders on a rural area known locally as the battlefield.
The table area is 6 foot x 4 foot.
The photograph shows all the relevant features in place before the game started.
The red circles show where the only two humans are at the start.
In the top left corner is the 'hero' of the story, one Mathias Groschen, a visiting history student. He's just finished his morning's tour of the battlefield (off table), and is now making his way back to where he's booked his taxi. The cab will arrive on a roll of a '6' at the beginning of each turn and will come to a stop in the green area. the taxi will arrive at one of the four roads and will exit (hopefully) from one of the two opposite ones, all diced for randomly at the time.
The yellow circles above show the starting points of the three zombies diced for at the start. Bob didn't generate any as he wasn't controlled by the player and was really just local eye candy.
The photograph on the left shows the closest zombie to our hero, actually standing on a spawn point.
The spawn points will generate zombies every turn, dependant on the encounter rating of the scenario. 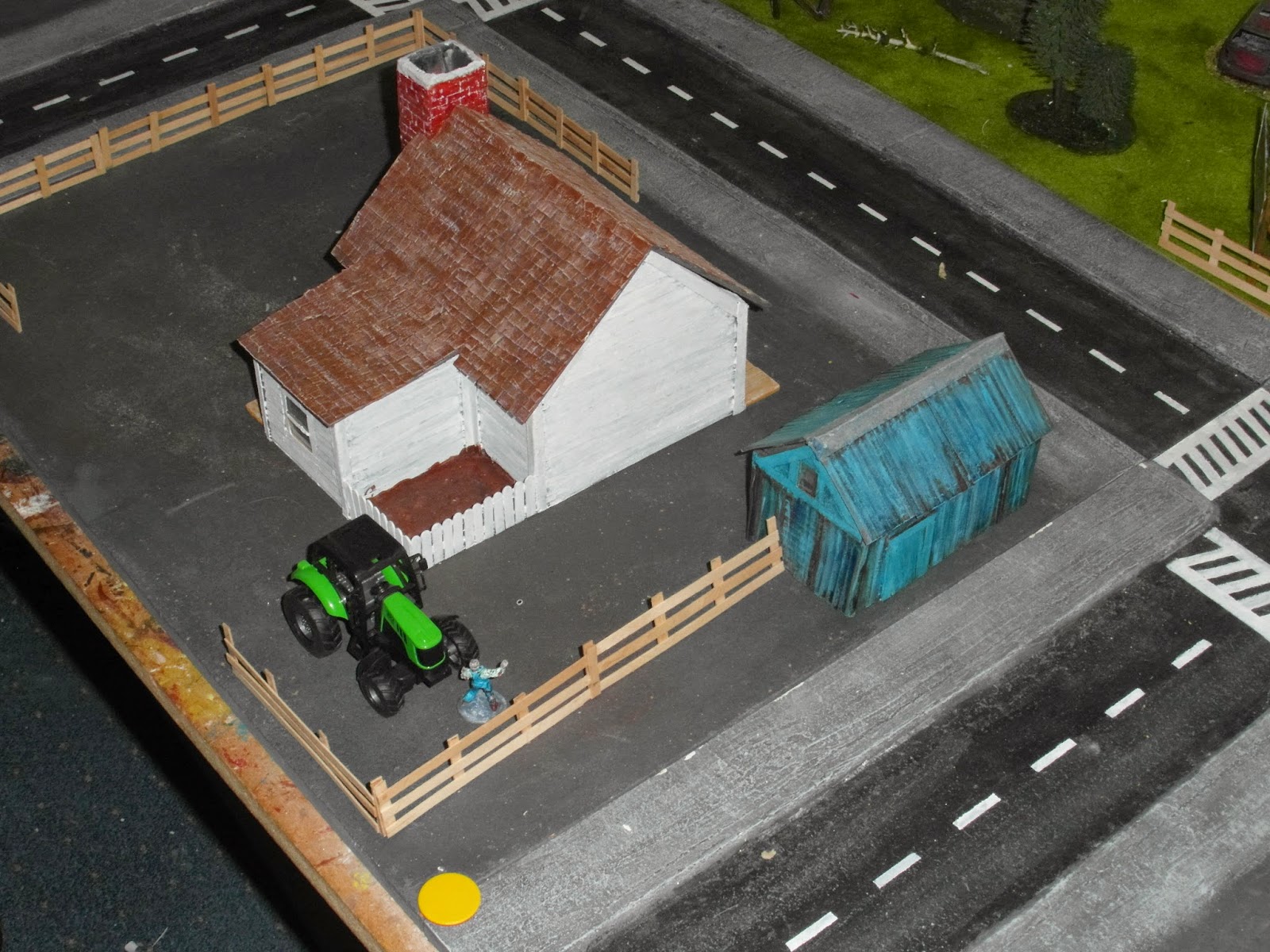 Whilst this scenario is in an Urban area it should have an ER rating of 3, but as this is only day one of the apocalypse it will be classed as having an ER of 2 and zombies will be generated as if they are in a rural setting.
The next photo shows one of the other starting zombies and one of the six spawn points, placed every two feet around the edges of the table (i.e. not at the corners).
Zombies will be generated from these each turn when the zombies activate on a throw of 1d6-3. Normally they would generate 1d6 -2 for a suburban area and 1d6 -1 for an urban area.
The spawn points can also be depleted on a roll of 1, indicating that no more zombies will be generated from that point.
Bob took very little part in the game, but there was a PEF (Initiative/REP 5) very close to him at game start - it can be seen just behind the billboard. 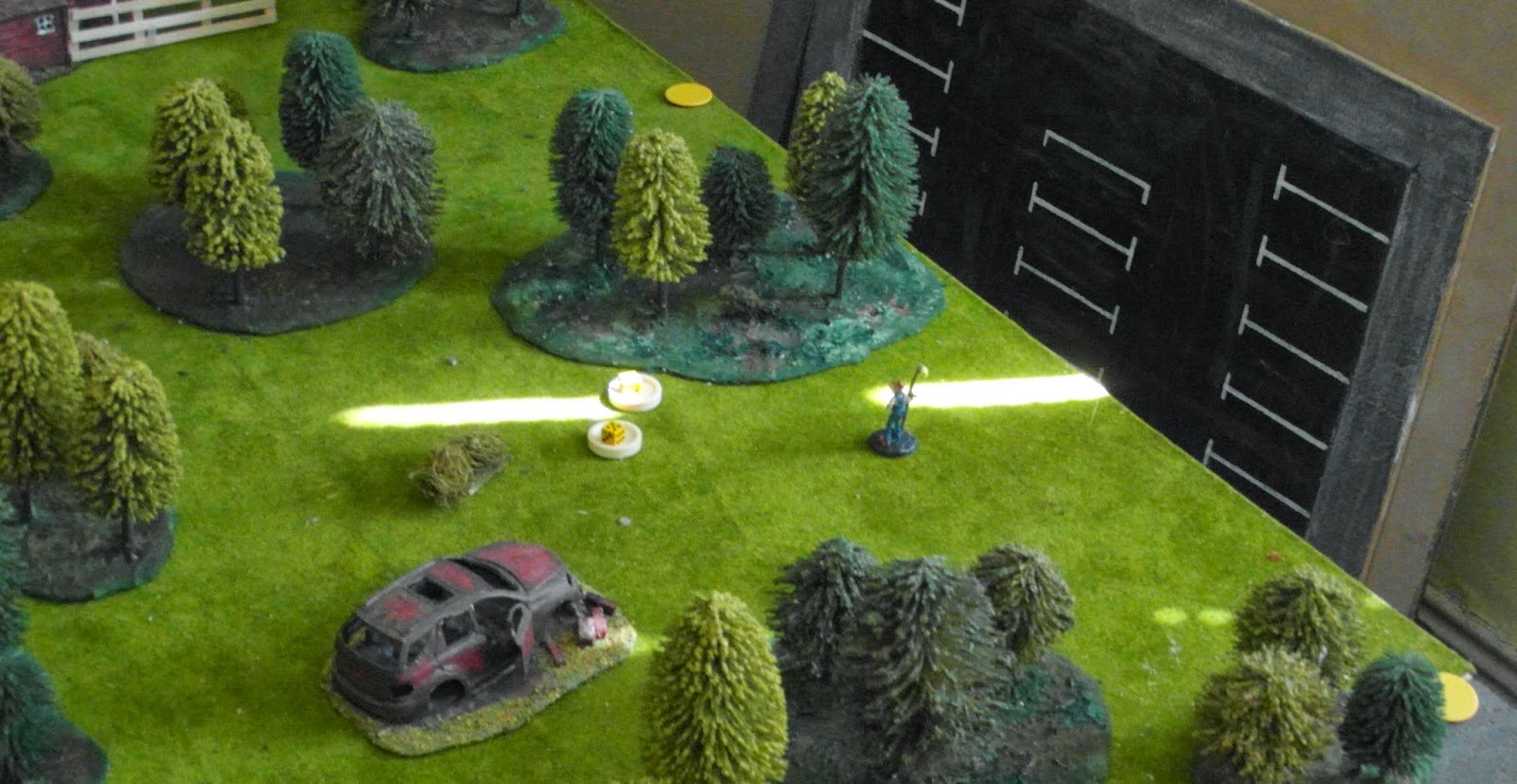 In the woods, not far from Mattias's start point can be seen the third starting zombie and the remaining two PEFs (another '5' and a '3').
The green terrain is a 4 foot x 2 foot board with an old GW flock mat cut and glued to it, kindly donated to my set-up by my son. (as were a lot of the trees). The trees and the green terrain board and the very hastily put-together fences were all made with this scenario in mind last year.
Like the random civilians, vehicles were also diced for, for each 2 foot x 2 foot piece of road terrain, needing a 6 to indicate one present.
The dice dictated that a single vehicle was present and it's actual position, facing etc were also diced for. The die at the rear of the vehicle indicated its speed in multiples of 6 inches - in this case it was down to a speed of '2' because of
the corner.
Further vehicles and civilians entering the table would be diced for each turn, as would time of day changes and events. The latter was not linked to the initiative rolls of the zombies and humans, but to a separate dice roll and would require a double one or two to indicate an event occurring (the starting ER being 2).

Next week I'll post what actually happened in this scenario, but that it for now.
As always your comments are both welcomed and appreciated.
Posted by Zabadak at 07:19