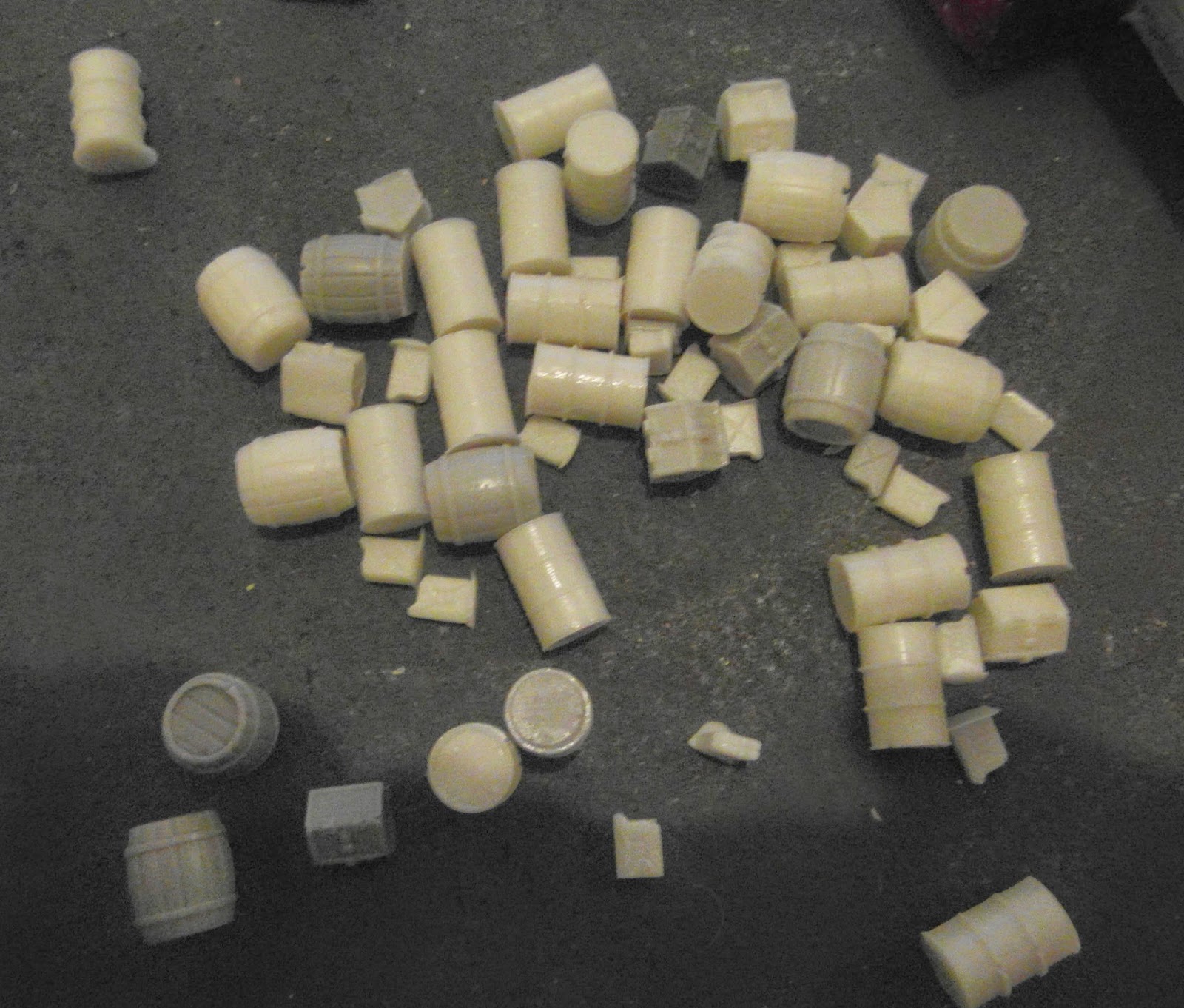 I was chatting to a friend about getting him to make me some oil drums, as he was currently experimenting with casting resin for both his own wargame projects and some non-wargame related items. The results of my request can be seen in the photograph.
As he was already in the process of casting some wooden barrels for his own use he kindly added some to my "order" along with some chests (very piratey) and some petrol cans.
Note: None of the items shown in any of the photos has had anything done to them as yet, being hot of the presses so to speak. 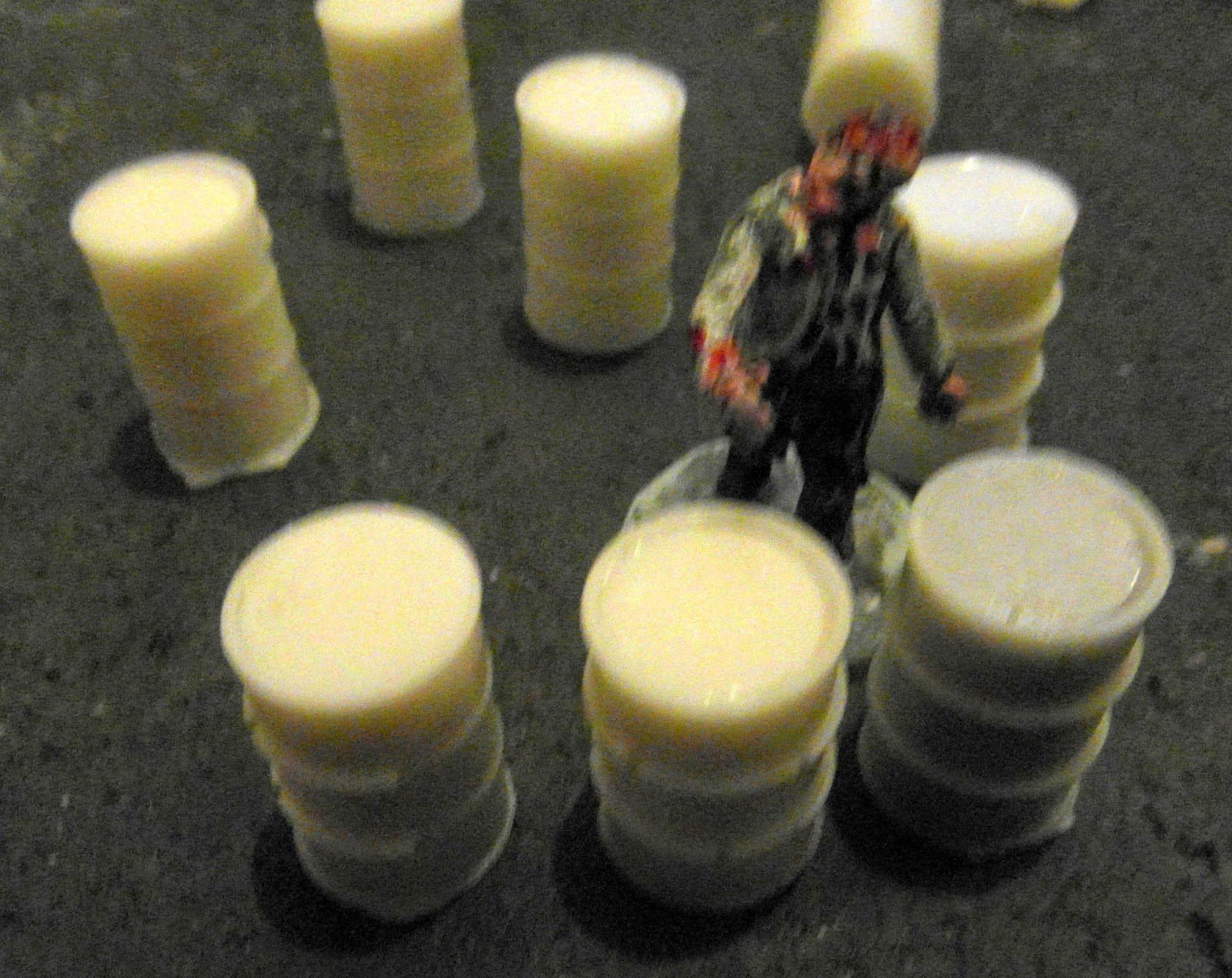 First up are the oil drums, useful for most of the 20th century and well into the 21st century, used all around the world.
The ones in the background are in fact the same height as those in the foreground, the effect due to the fore-shortening of the picture (and nothing whatsoever to do with my poor photography skills - no sir! ).
The slightly out of focus zombie is a Wargames Factory plastic figure shown for scale. 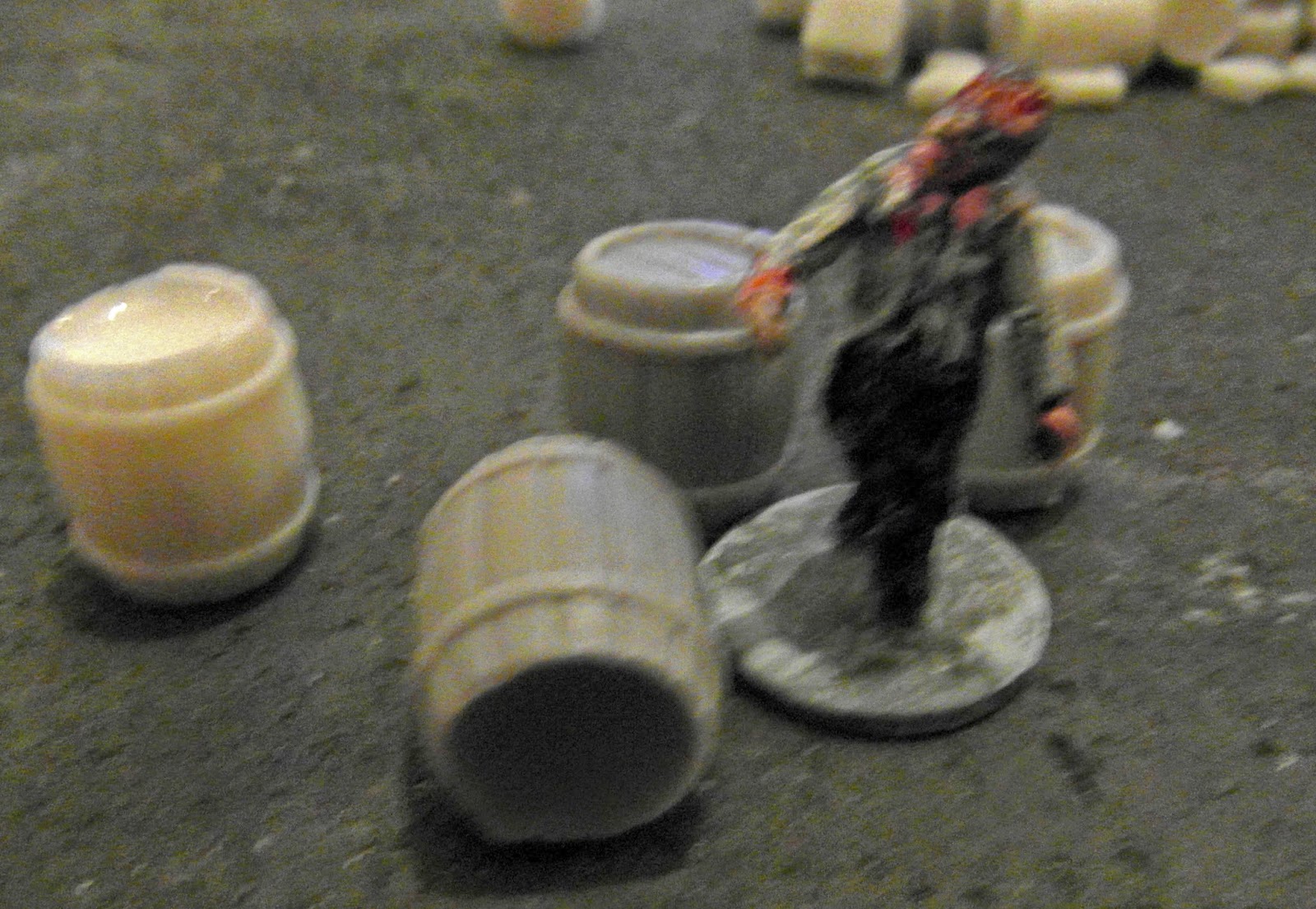 Next up are  a few of the wooden barrels I received, nothing spectacular maybe, but perfectly adequate for my purposes. 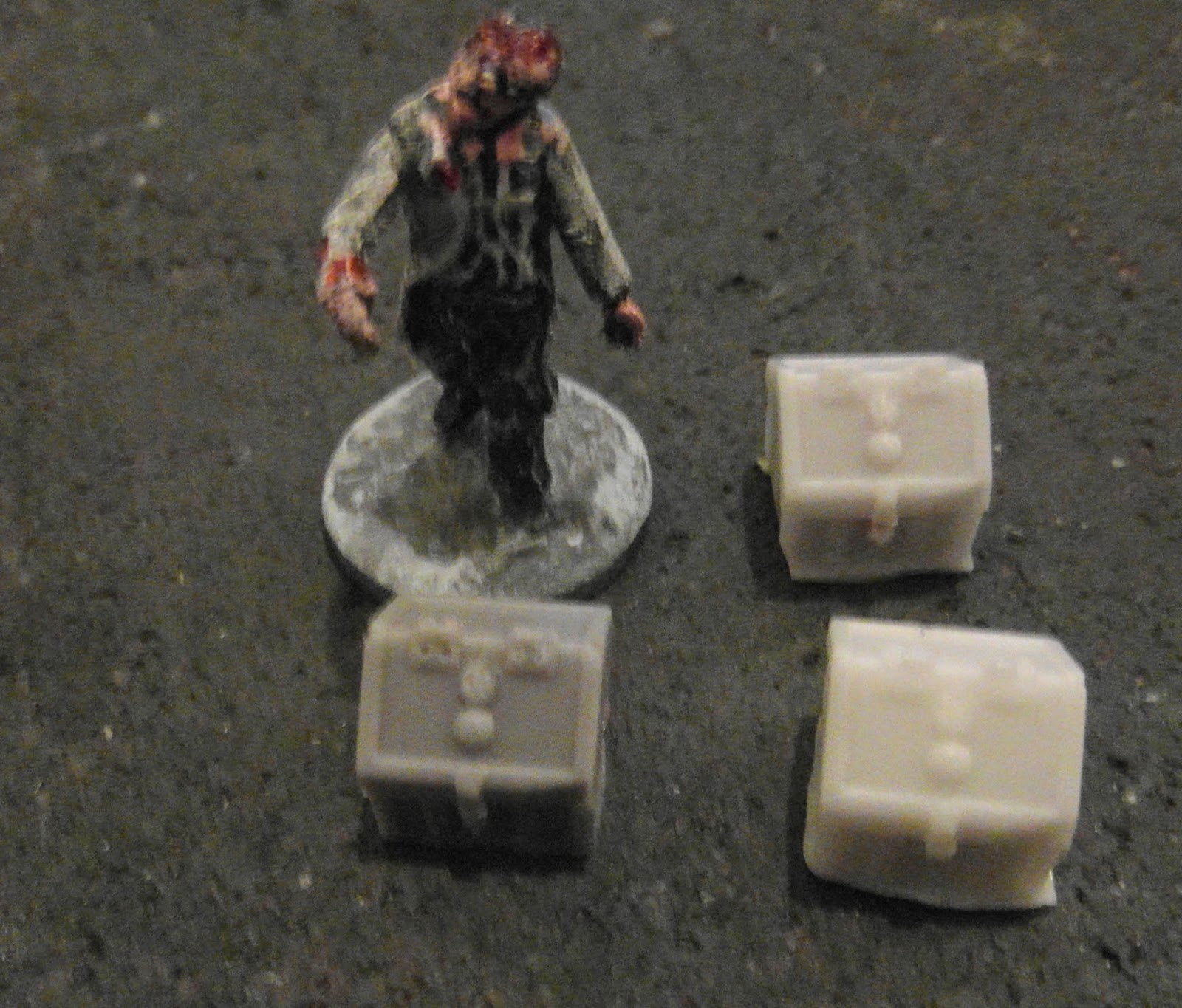 The "piratical style" chests are small but beautifully formed with sufficient detail on them to be able to determine what they are at a glance.
These were quite an unexpected bonus and very well received, but like the wooden barrels it is also a temptation to resume my unfinished Pirate project.
Hmmm. 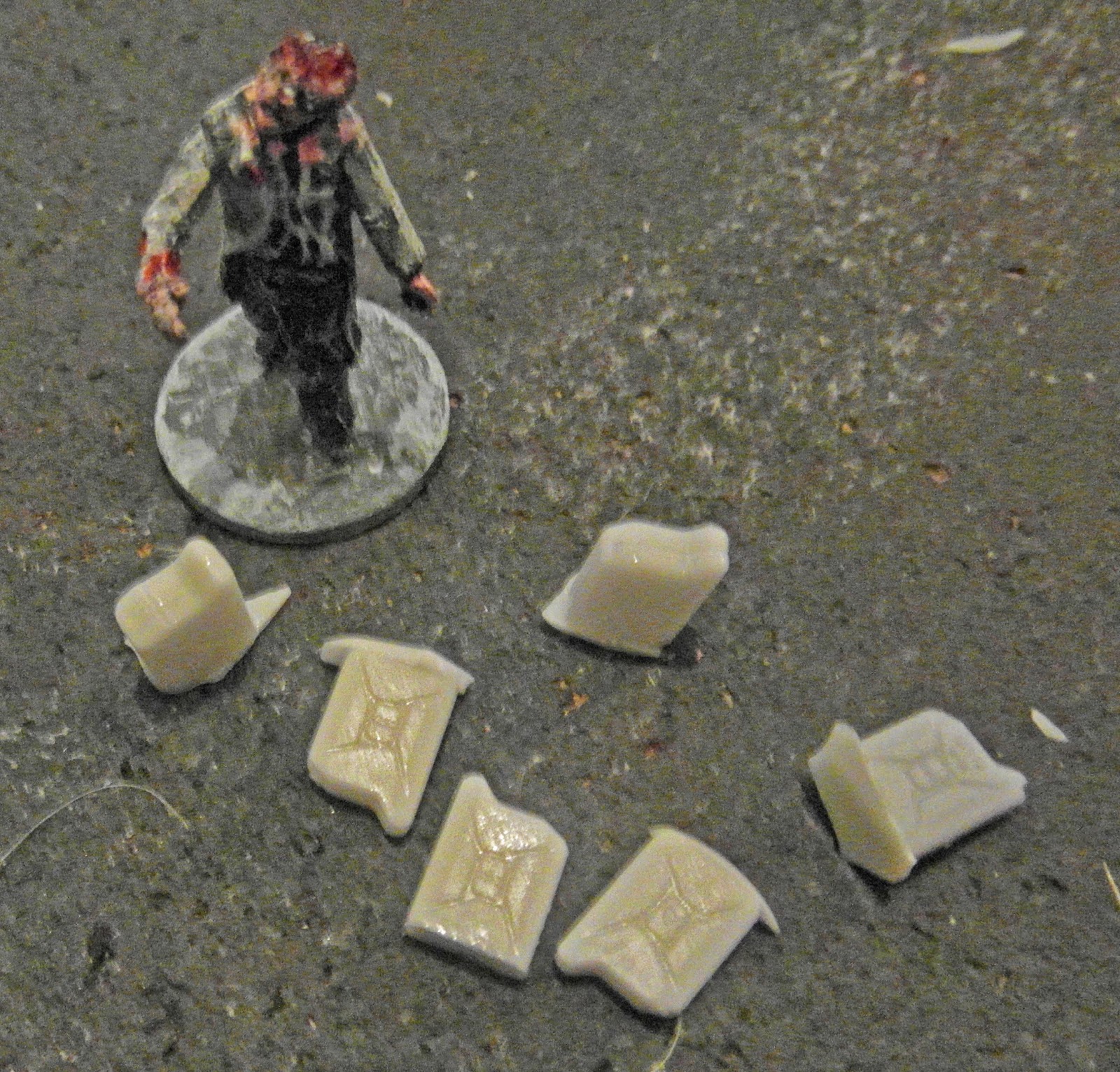 And we're back in the room with something aimed at a modern setting.
These were yet another very welcome surprise and one that can be used in modern zombie settings without much trouble.
I personally think that these petrol cans are great, they can also have all sort of uses too and like all the other pieces these have some flash on them, but nothing that a file won't shift very easily. I also had to 'play' around with the photo to get the detail showing on them.


Amongst his other current projects are sheets of cobblestones, roof tiles and shingles, to go with the various houses he's currently working on, most though are still a work in progress. I've asked him to put some of his pictures up on line on his facebook page (Captain Jack's) which will no doubt happen in time. He has also made a lot of Futuristic models, and has a 'line' of hand crafted (and cast) vehicles too; if he gets round to putting pics up I'll put a link to them for you all to see.

That's it for this week, I'll keep whatever it was I was going to post this week for next time

As always your comments are both welcomed and appreciated.
Posted by Zabadak at 12:52