During his sojourn Mattyoo and I were tempted by rumours of "wonderful things" in the deep south by fellow blogger Vampifan and after a long (*5mins) journey south to the other side of the river I was introduced to Gateshead's "Poundlandworld". The temptation to head south was the attraction of purchasing some alleged Doll's houses to be found there.
When I had first heard of these I thought them to be a myth as they weren't to be found in any of the three similar shops in my locale.
Nevertheless blogger Mattyoo and I headed to the wilderness under the care of our trusted guide Vampifan.
The rumours turned out to be slightly better than I'd hoped and there was not one but two variations of the houses.
Although marked as 'Swag  2' these were actually bought before the vehicles I posted about last week.
For the princely sum of £1 each I couldn't resist and purchased three of each after some negotiation with the assistant to retrieve more. (Vampifan had snatched the only example of the first variant from off the shelf) .
Eventually I ended up with 3 of each.


The insides were as gross as could be imagined for a pink girly "Barbie" type house, with stickers representing everything from carpets to clocks, which would obviously all have to go if they were going to be usable at all.
The fact that they were only facades was a little underwhelming but was livable with.
The photo does show a very interesting socket arrangement (on the bottom left) which I'll come to later.
The second building was equally as gross as the first  with more stickers and once more a hook arrangement, but this time on the opposite corner.

The roof attachment was four screws, so at least it would be easy enough to remove the roof. 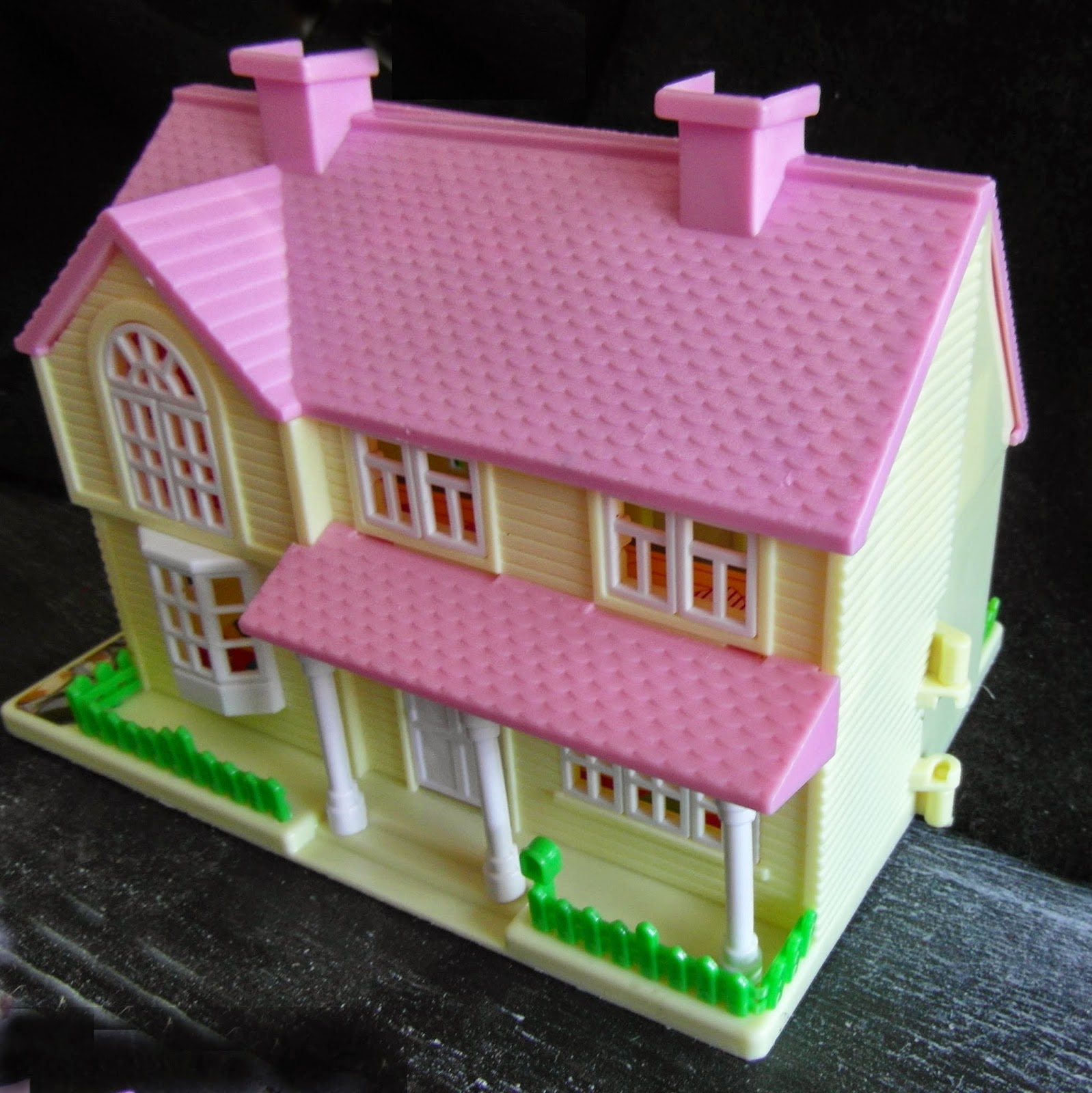 After a bit of jiggling about it was found that the two halves could indeed be fitted together to make a single building even though it was obvious from both styles that they were probably meant to fit on something other than each other.
The first building had represented wood slats whilst the second had the 'crazy paving' effect so neither were truly meant to be compatible.

Even so with this in mind I have made some inroads into making these into a model suitable for use. If it ever gets finished it will of course appear in a future post.

One of the surprises to be found in each of the model packages was a small package of bits.
You can just about make out what they are in this photograph.
Two blurry armchairs in white; a toilet in need of a pedestal, a child's blackboard that Sid is behind; a table and parasol and some sort of dresser.
The most useful piece in this package though was the very usable shop counter, complete with till.
In the second package 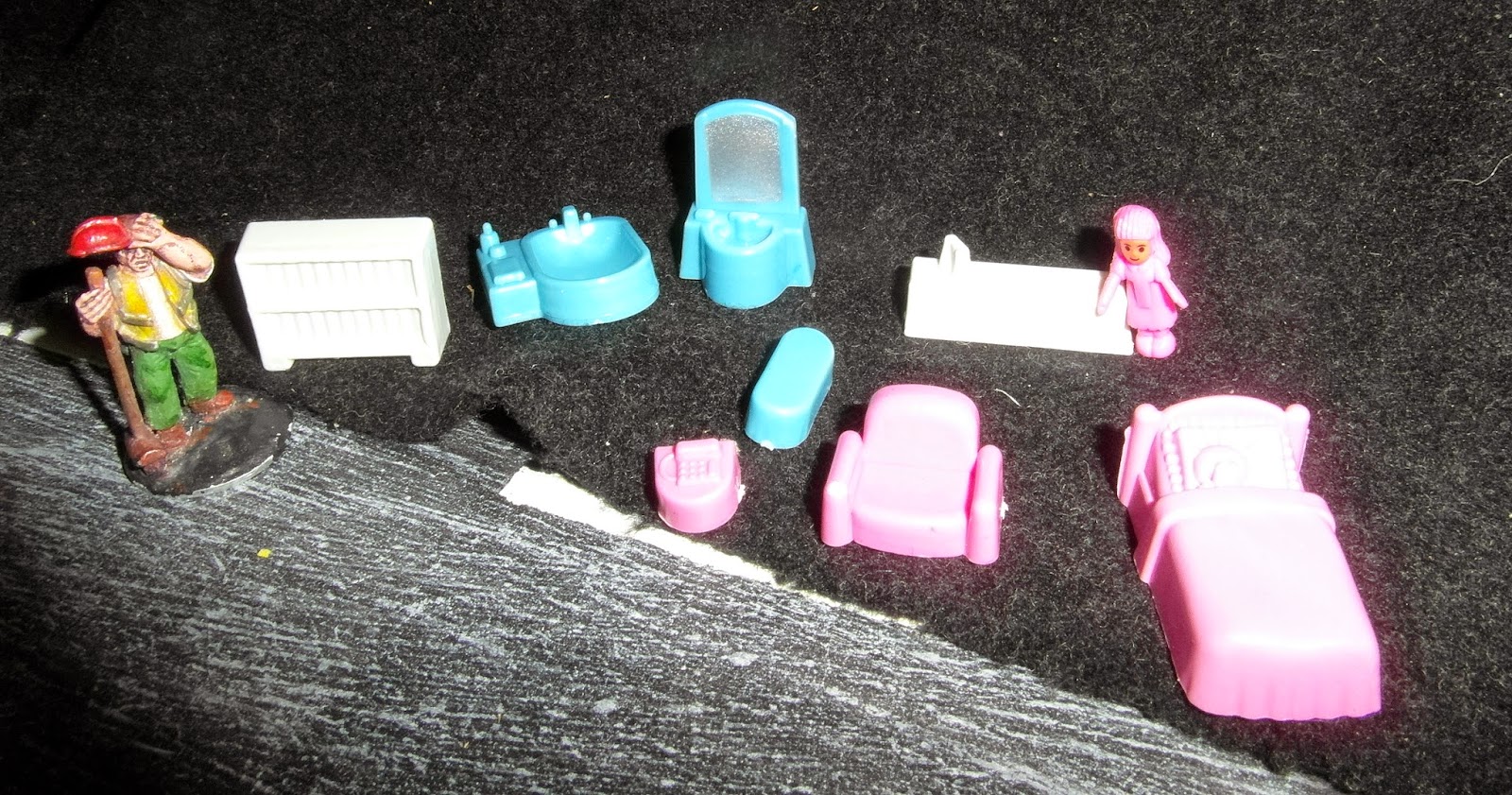 The second package contained several items of a similar nature.
A set of draws; a small child-sized bed, a seat; a chair; a dresser and a bath.
In both packs there was also a small doll-like figure which at a pinch could be used as a child in games, but would be equally at home as a mannequin in a shop, such is the detail (or lack thereof)

That then concludes my Holiday Wag purchases and I for one would think that the shop counter was an excellent find and I'm sure would have been well worth the £1 I spent.

As always your comments are both welcomed and appreciated.
Posted by Zabadak at 06:15