Many of you will no doubt recognise what this model is from the name alone, but just to make things clear this is my rendition of a gun-shop.
It's a card build, built from a WorldWorksGames'  product, namely the old "Mayhem Armoury" set which incorporated three distinct pieces, a shop, a garage and an apartment. I've used all three elements of the original set for this model.

Unfortunately when they changed their system they also made three sets from the original one, so it's no longer available.
The sign at the front is obviously not part of the original model, but I didn't like either of the ones that were offered,  "Mayhem Armoury" and "Bob's Bullets" were both to bland for my liking and already in use my many others. The notice is backed in a very thin card but is reinforced by coffee stirrers and some thicker craft sticks for support. 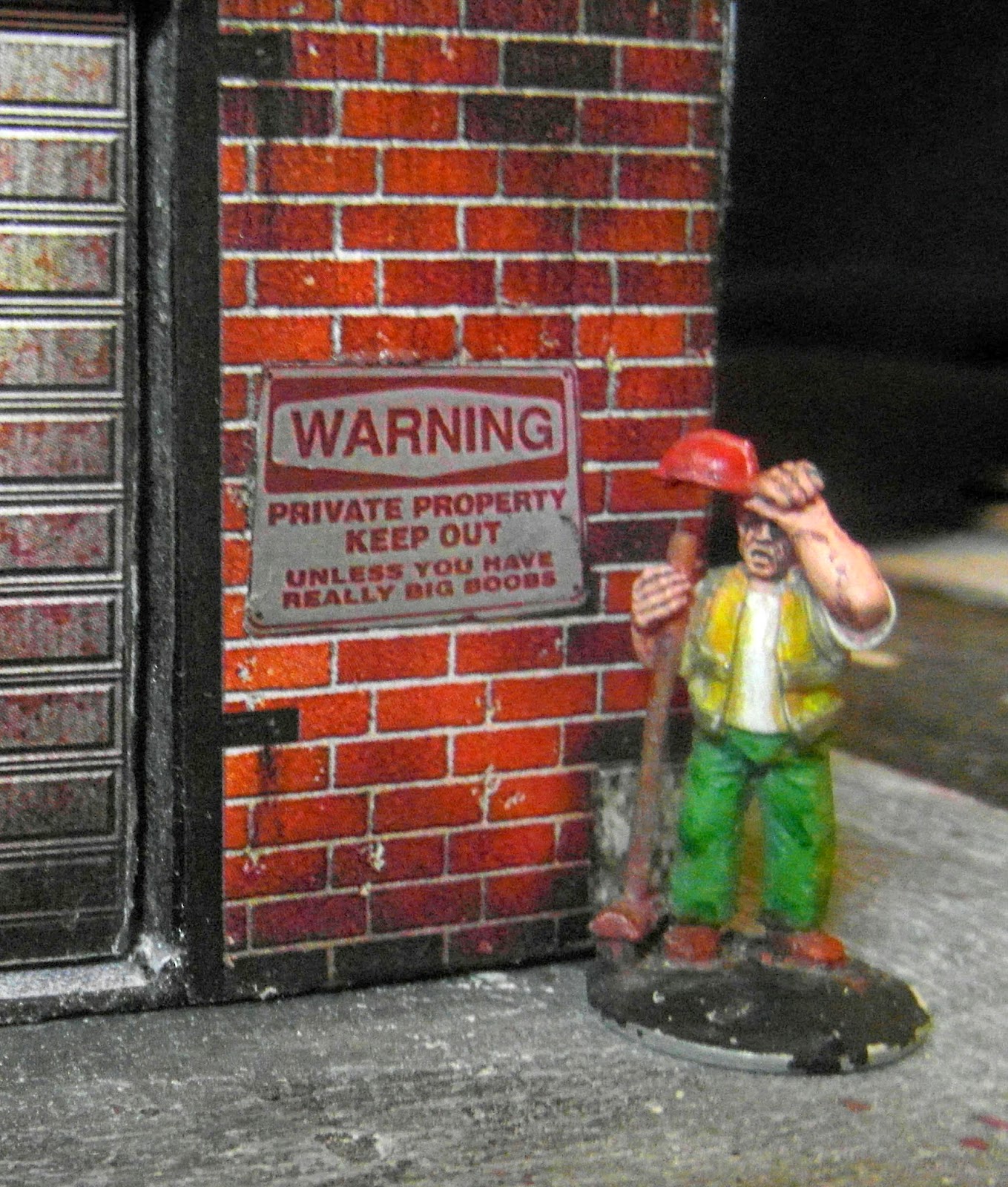 The sign on the corner where Bob is standing doesn't come with the set and is one of the many random signs that I've gleaned from the net over the last two or so years.
I've used this sign before, in my construction site build, and I've also used many more random signs throughout this model.

Onto the clockwise tour around the outside of the building; the second wall was looking a bit dull so I added another Ammu-Nation sign


The rear of the building has graffiti from the standard wall set and whilst I could have easily removed it from the print with a bit of photo-shopping I thought it looked OK and left it.


The door by Bob however was a different matter and I added a poster, which I thought fitting for the shop.

It's obviously a new sign as it hasn't been graffiti-ed yet !
(In case you can't read it, it says "Never mind the dog, Beware of Owner"

I left the already present graffiti on the door by choice.


The roof was entirely scratch-built from card and 5mm foam-board.
I've used 5mm foam-board for all the walls throughout this model. The side walls are thicker card glued onto the outside walls and are little deeper than the edges of the roof so that the roof sits onto the model and overlaps slightly,
The roof itself is also foam-board and it too sits inside the building.
I sprayed the roof black and sprinkled a bit of sand on top to give it texture before painting it.
The top of the wall surrounding the roof was first covered in a very thin card (about cereal packet thickness) an the entire roof walls were covered in wall filler before painting and "dirty-ing"  with a dark wash.

This top-down view of the shop shows its general layout.
The stairs are made from scrap foam-card and an additional wall was printed and cut to size.
originally there was going to be no alcove under the stairs but the positioning of the door into the garage dictated that I had to have one.
The front of the shop is at the bottom of the photograph, in case you're wondering (but I'm guessing you're not)

Some internal shots, showing signs I've added by the back door. (left), two shelving units I made from the single double-sided one provided, above which is a knife display and lastly one of the two gun display cases provided (below)


The counter was provided by one of the doll's houses I bought and I've added two signs that can be seen in this view. One is a Winchester Rifles signs behind Sid and the other is the sign in the top right (it reads "due to the increased price of Ammunition, no warning shot will be fired)


The "garage" was meant more as a storage place than as an actual garage, but I did leave enough room to get a vehicle in before I stuffed it with all manner of crap.

The photograph below shows the back wall and entrance from the shop .
I've added some posters from various sources other the the set itself.
The boxes are from Ebbles (I think) which I printed off a couple of years ago.


I'm very aware when making buildings of being able to get figures into them, so I tend to have gaps sufficient to allow room for figures to stand.
The boxes of course were placed strategically too, to provide cover.


The storage shelves almost certainly came from Ebbles and the oil barrels were a recent addition to my scenic bits supply.
In the corner are some garbage bags from my stock as well as some newspapers which I like to add to models too.
I added a toolbox from goodness knows where and one of the myriad of books I made sits on top of it.
The final corner of the garage is more or less as standard, with just a couple of newspapers I've added on.
The apparent "orangey" square in the centre of the garage floor is a trick of the light (and not due to poor photography - no sirree), it is actually the same colour as the "surrounding" grey-with oil stains floor.


So  swiftly moving on upstairs.
Continuing with the tour to the first floor (second if you're American), here's Sid standing over the very dangerous stairwell, wondering where the protecting rail is. (Little does he know I forgot about it and had ran out of glue anyway by the time I had realised)
Nothing really interesting here though I did add the welcome mat.

The sitting/living room below shows some of the doll house furniture along with my scratch-built sofa and a couple of extras. 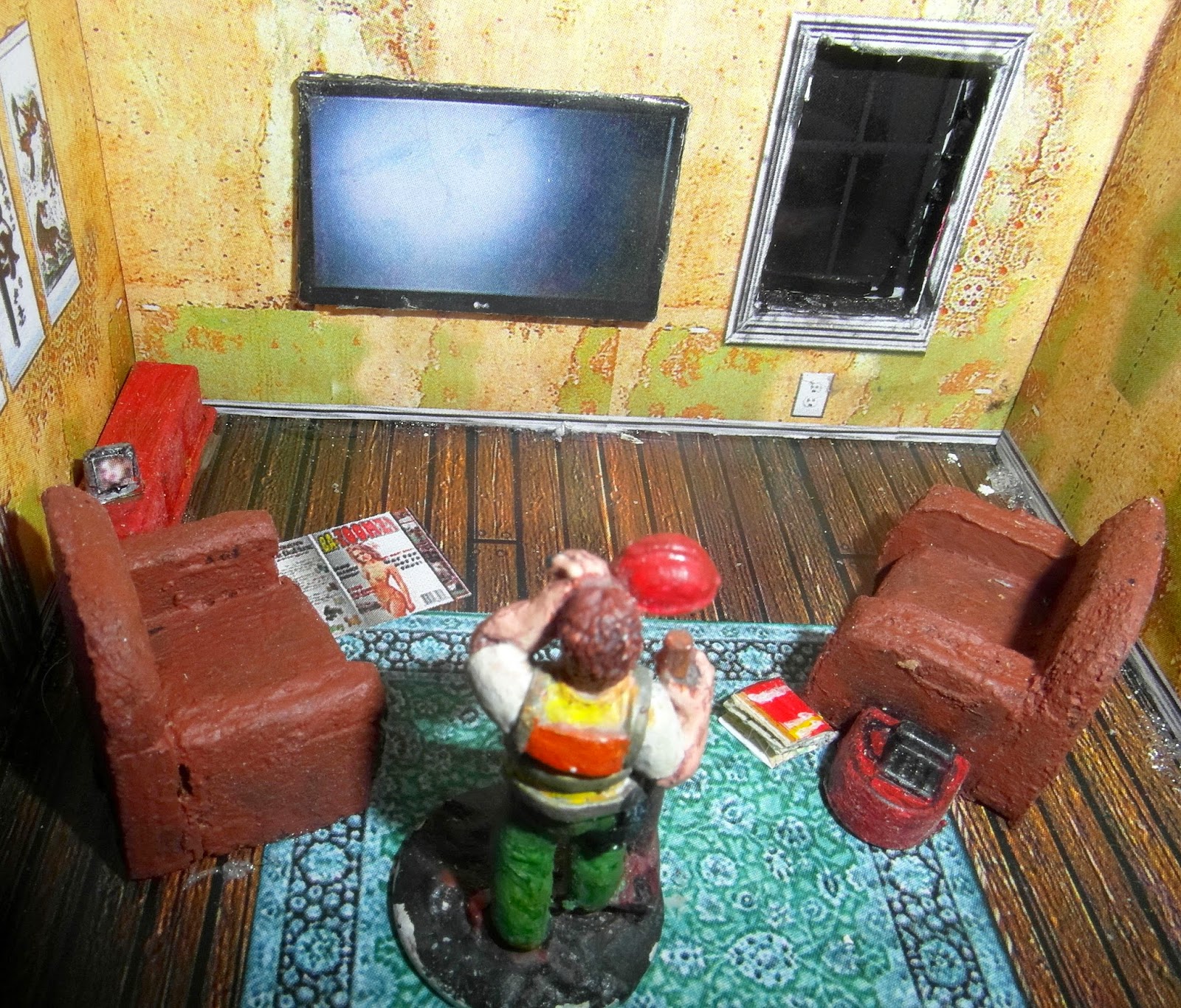 The other end of the room showing two bits from the doll house  and my home-built chairs, whilst the book was my addition, the newspaper and carpet were integral to the flooring whilst the TV came with the model.


Through the open doorway (I was sick of doors by this stage) is the kitchen, my only addition here being the pizza (left).
The various other kitcheny stuff came from sources I've already mentioned.
At the other end the "Fat Dragon" table has a microwave on it. and my own additions of a newspaper (again) and some rubbish bags. The bench seat is deliberately placed askew to allow a figure access to the window.

The first bedroom, nothing remarkable to see, I've added a picture to the wall and my own scratch-built bed.
The second bedroom has had a single bit of furniture added from the doll's house with one of my bonks for good measure (in case you hadn't noticed them yet) and another scratch-built bed (from stock). The pictures were also my  additions. 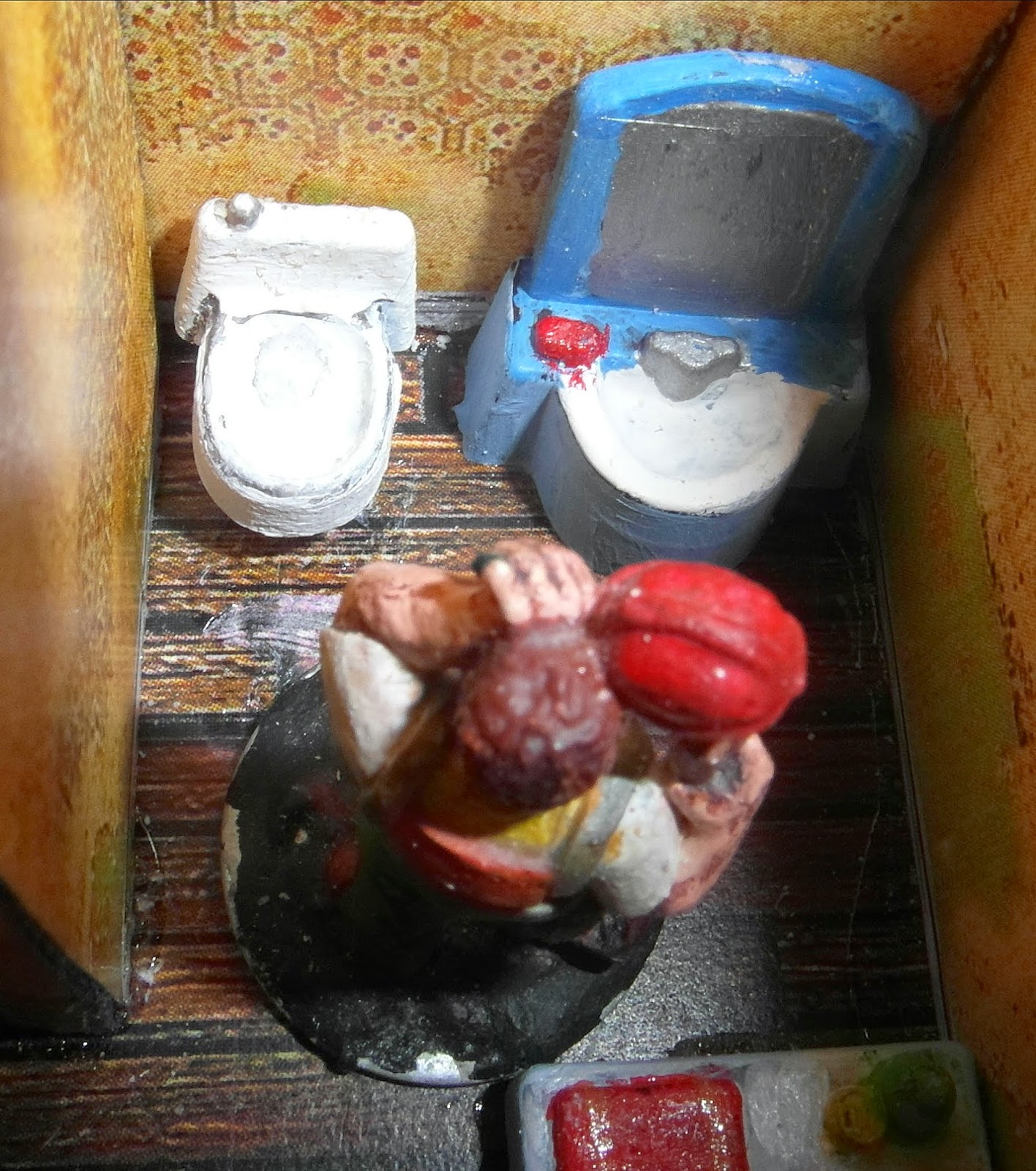 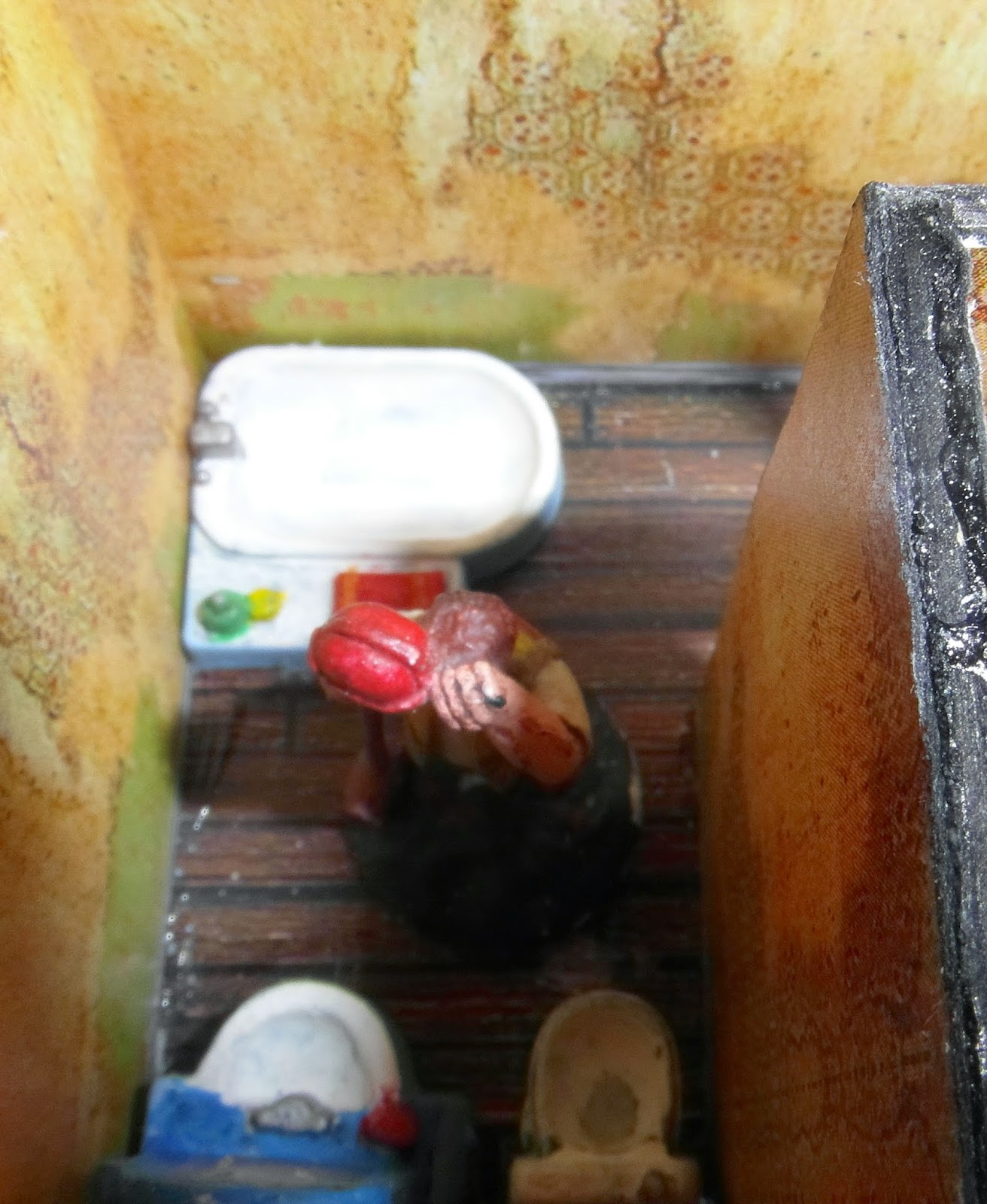 Finally two view of the smallest room utilising the Doll house bits again and with no added bits of my own (for a change - no wonder Sid looks confused.)


That's the five cent tour complete now and whilst this model is no great shakes in comparison to others that I've seen, at least (and at last) I have a gun-shop ! The windows are all see-through and the doors do open, (even though the garage door is merely a "plug" in door) and I'm happy enough that it's usable enough for my purposes. Its footprint is about 7" x 14" (175mm x 350mm) and it's about 8" tall (200mm) to the top of the parapet.
It didn't really take that long to build but did take up a lot of print - about 12 sheets of A3 !

That's it then for this week except of course to say that as always your comments are as ever both welcomed and appreciated.