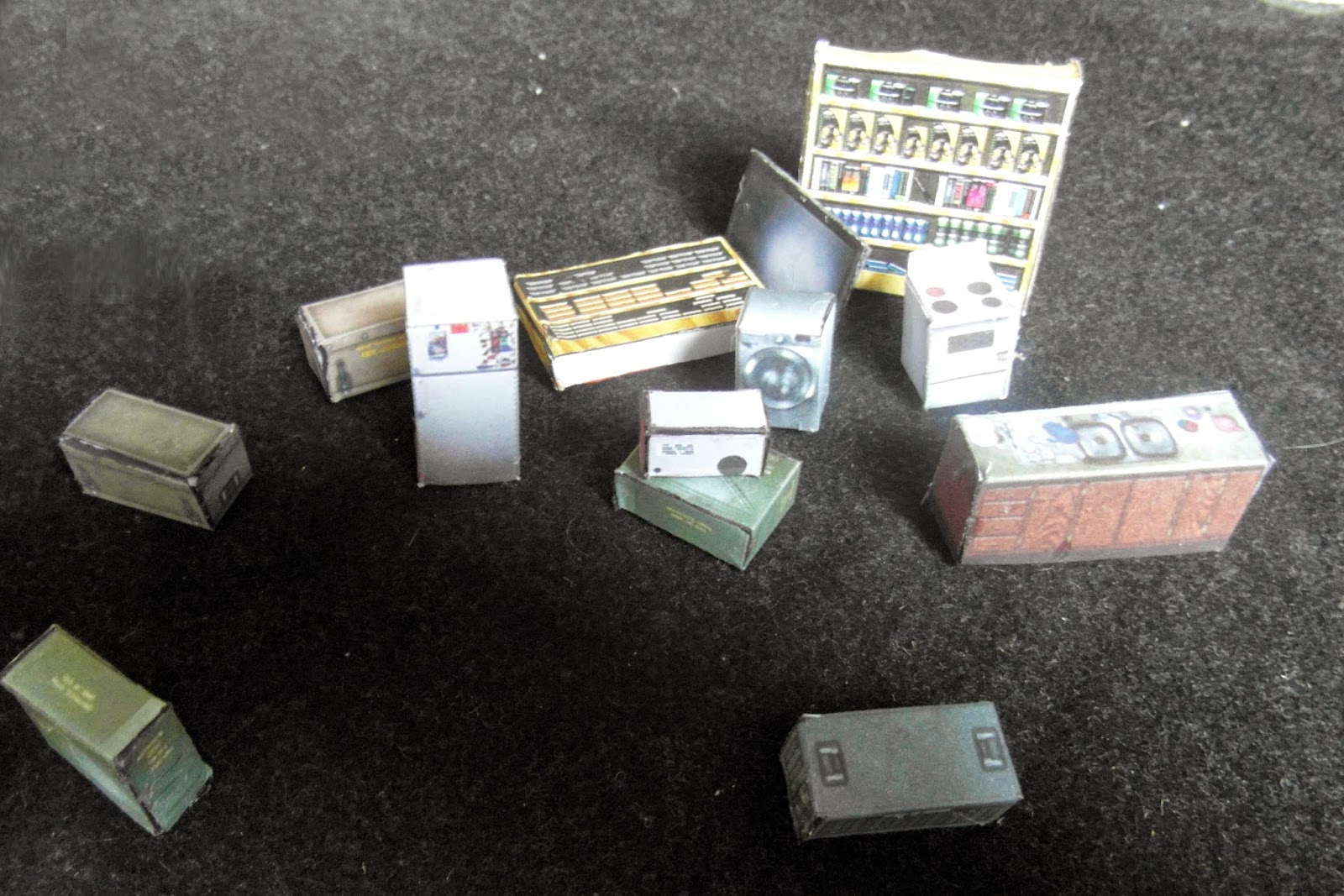 Probably a fitting title for a zombie orientated blog you may think, but unfortunately it also fits the bill for the few bits and pieces I've been making for my next model . As the model is based on a WorldWorksGames' building, a lot of the features will also be card builds as shown in the photograph.
A few of the bits though are from Tommygun's excellent card model accessories too and possibly others as I printed a lot of bits off a long time ago with the intention of cutting and using them as required.
The pieces have all been reinforced with a bit of scarp foam-board or card to give them a bit of strength. They'll all be glued in place too, though the boxes/chests may be glued together as a movable piece.
The shelving above is presented as a two sided aisle display, but as I'm going to have it flush with the wall it's been cut to make two shelving units, one large and one small. Normally I'd have scratch built shelves, but as this was meant as an almost pure card build, I've stuck with the card props.
The table on the left is also going to be set against a wall, hence the single supporting beam underneath. 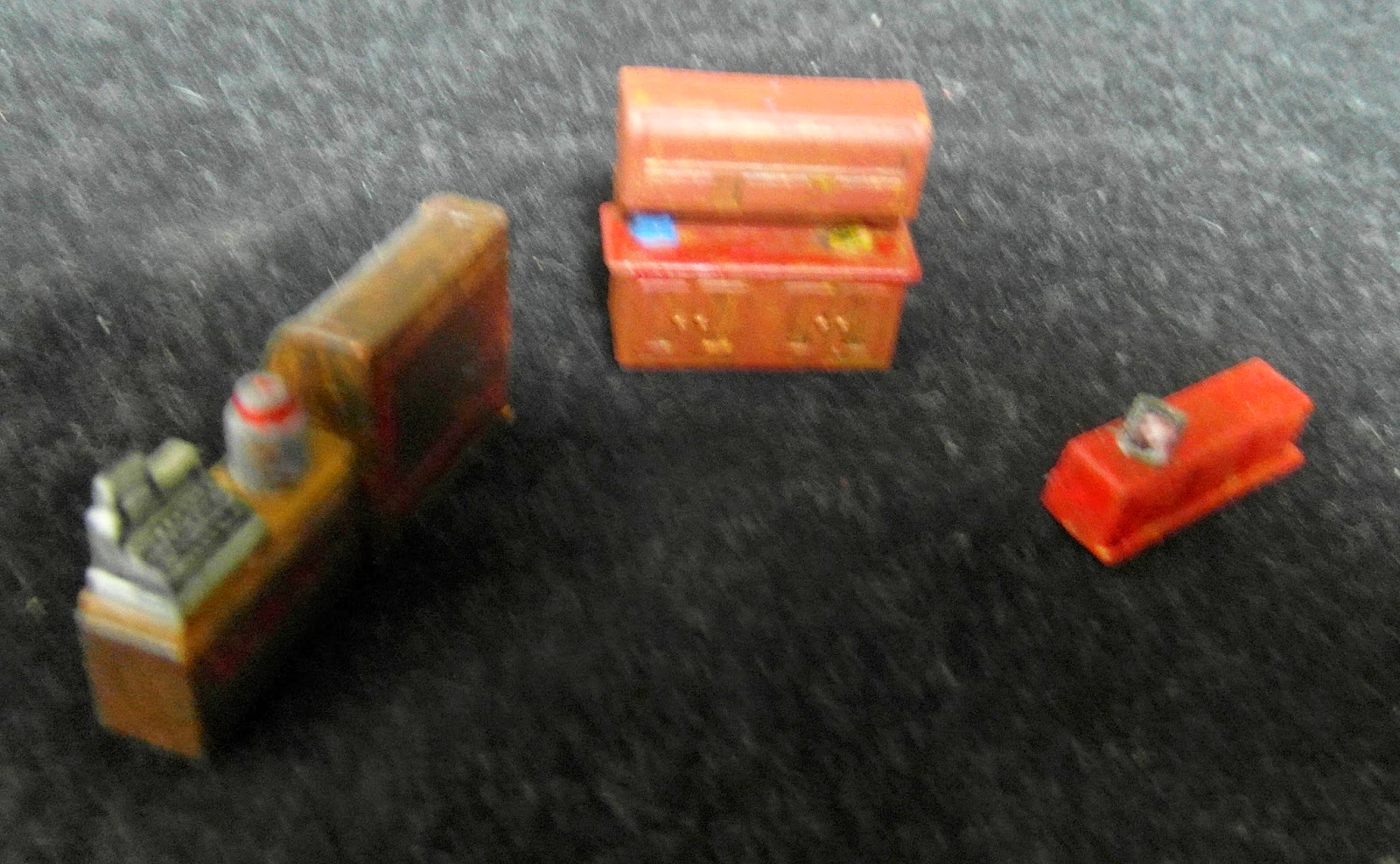 As I'd also bought some cheap houses that had interesting bits inside I've also painted some pieces up and as they've turned out rather well, I'll be using these in my next building too.
Shown are a shop counter on the left, (rather nice till  and some form of sweetie jar (candy); a sideboard type thing and a low table with what I've taken to be a picture frame on it.
(If the cameraman was better you'd be able to see that I have in fact stuck a picture in the frame.)

One of my favourite bits from the doll's house goodies was this bookcase , shown here with a small side table with telephone.

When these are in place in the model, I'll probably add one or two extra bits and pieces for variety. 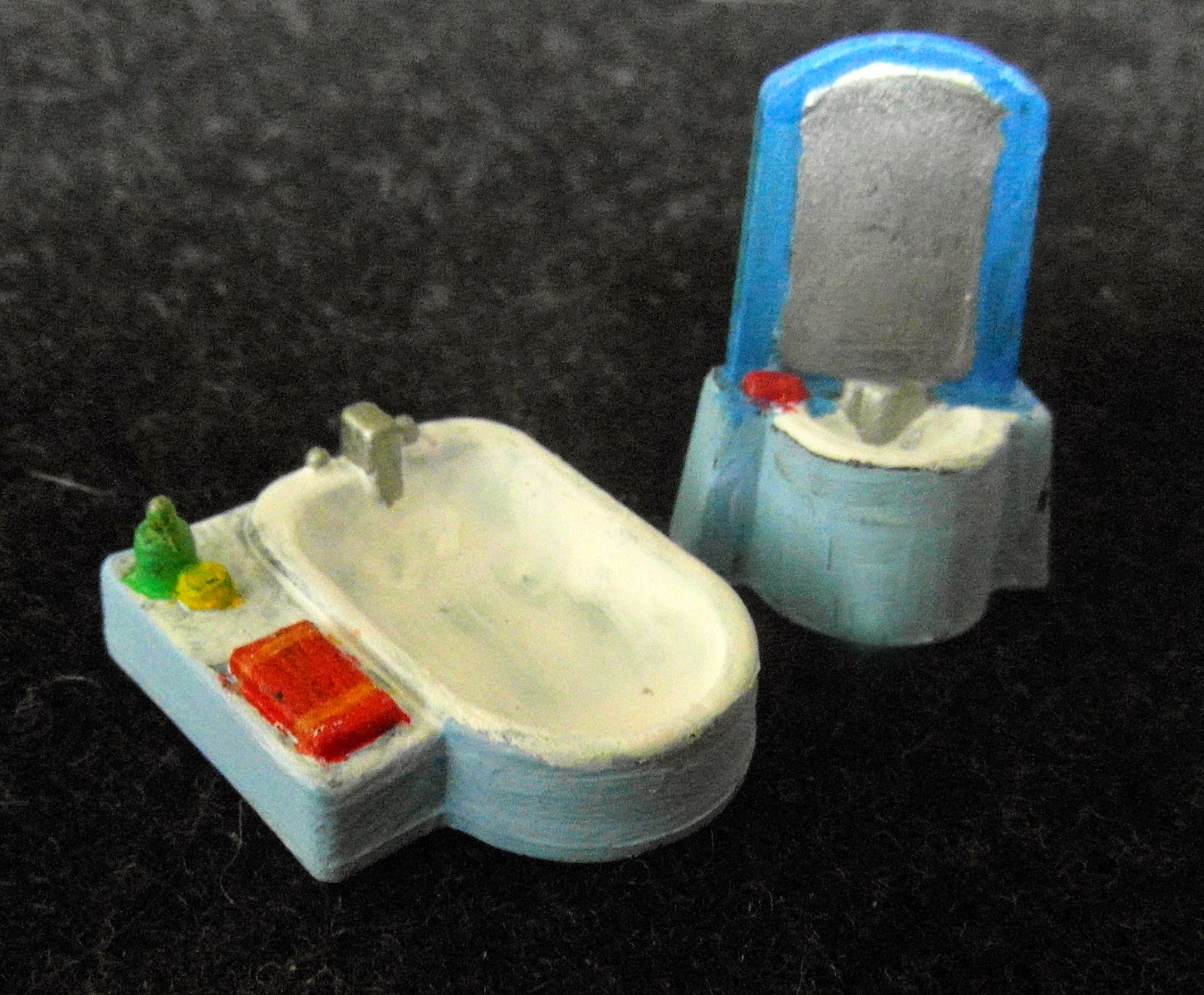 One of the things that I haven't found at all easy to scratch-build are bath-tubs, so this piece is a welcome addition to the internal detailing, along with the dresser/washbasin .
Of course the bathroom wouldn't be complete without a toilet and whilst I've have a small stock of scratch-built toilets I thought I'd also utilise the one that came with the other items. 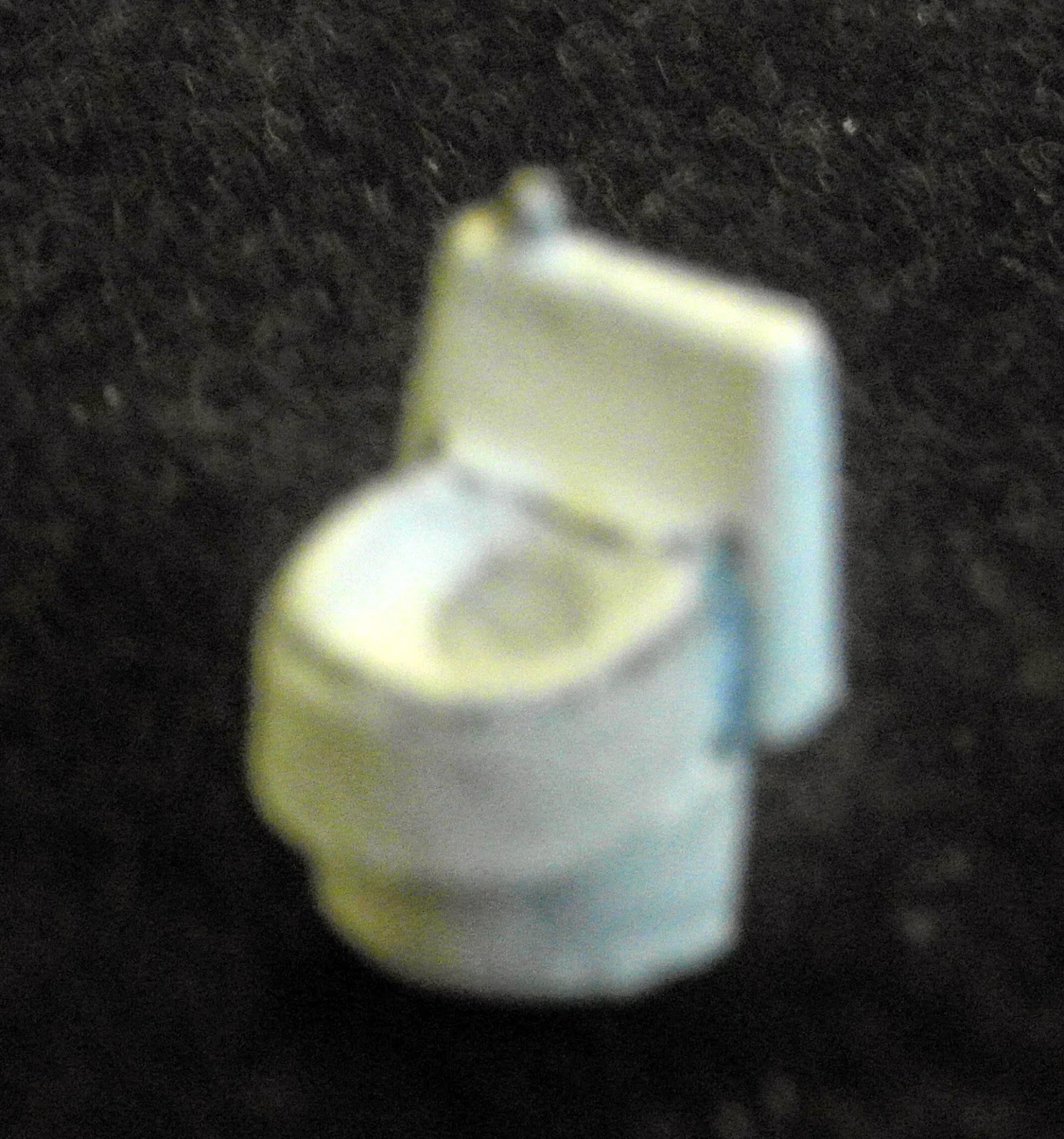 The toilet provided sat far too low for my liking, looking more like a toddler's potty, so I've cut a small plastic tube (about 5mm) and  glued it underneath to raise is  to a more acceptable height. 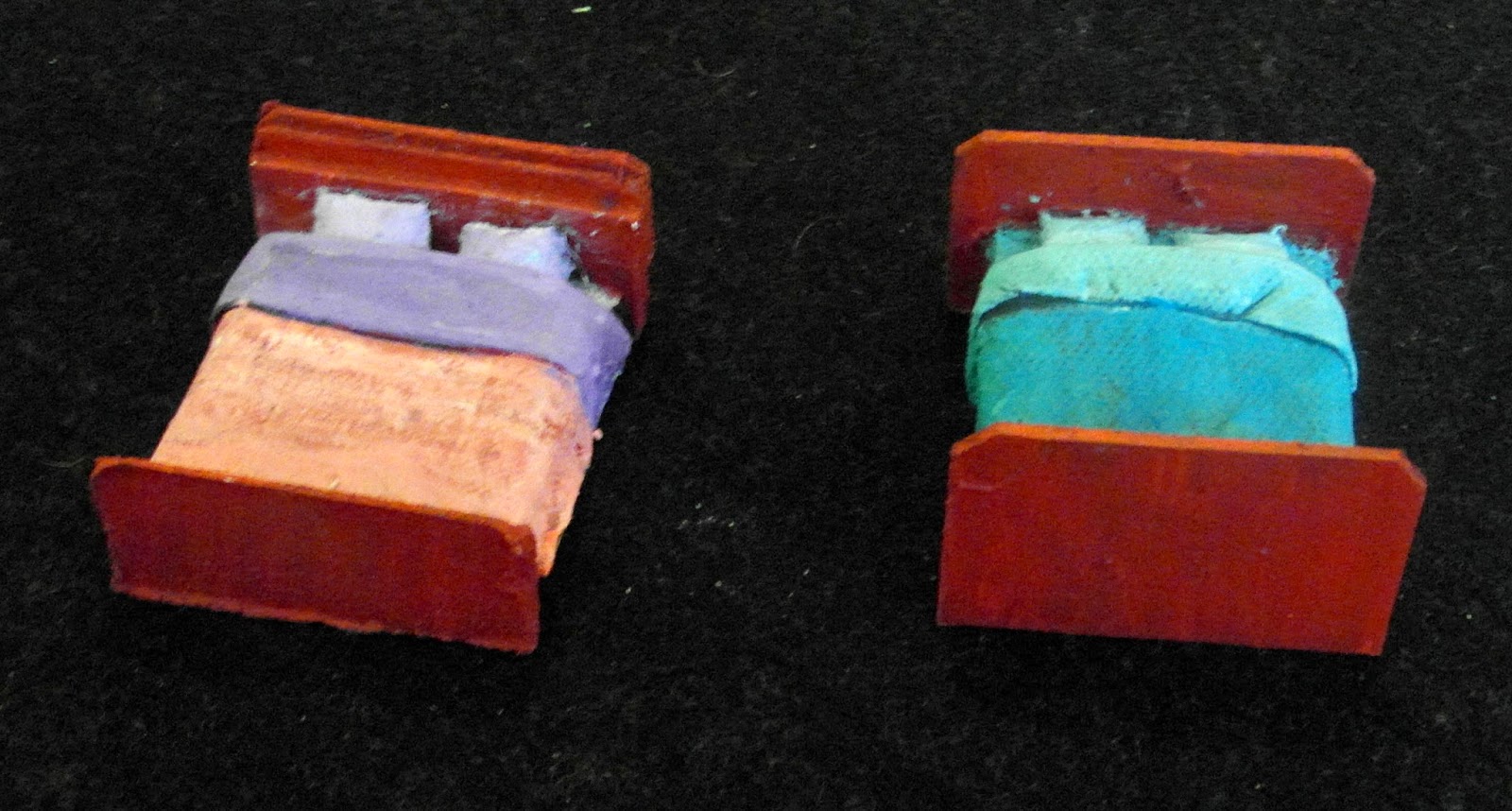 I'll be using a couple of the beds that I made rather than the card ones available and I won't be using the child sized bed that came with the other things either. I've also chosen a set of living room furniture from my stock of scratch-built stuff too. 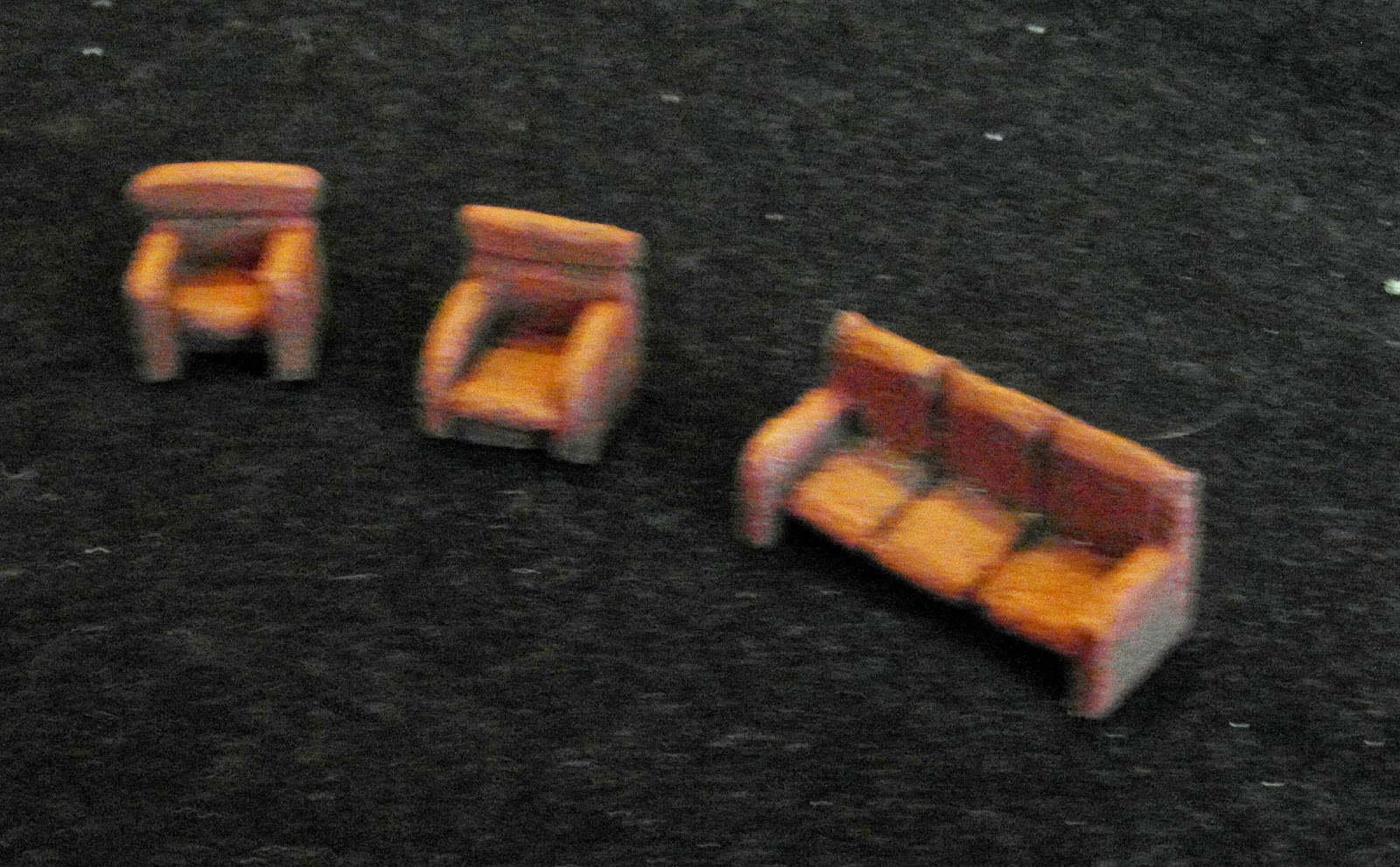 So what was going to be a purely card model has in fact turned into a mix of card, scrach-builds and commercial items, at least for its internals.


The building is now about 90% complete, requiring only all the above to be fitted and glued into place and a rather awkward door to be sorted out !

Other than to welcome my "latest" follower Chimichanga_X (whom, until recently, we knew as MAj. Diz Aster) that's it then for another week and as always your comments are both welcomed and appreciated.