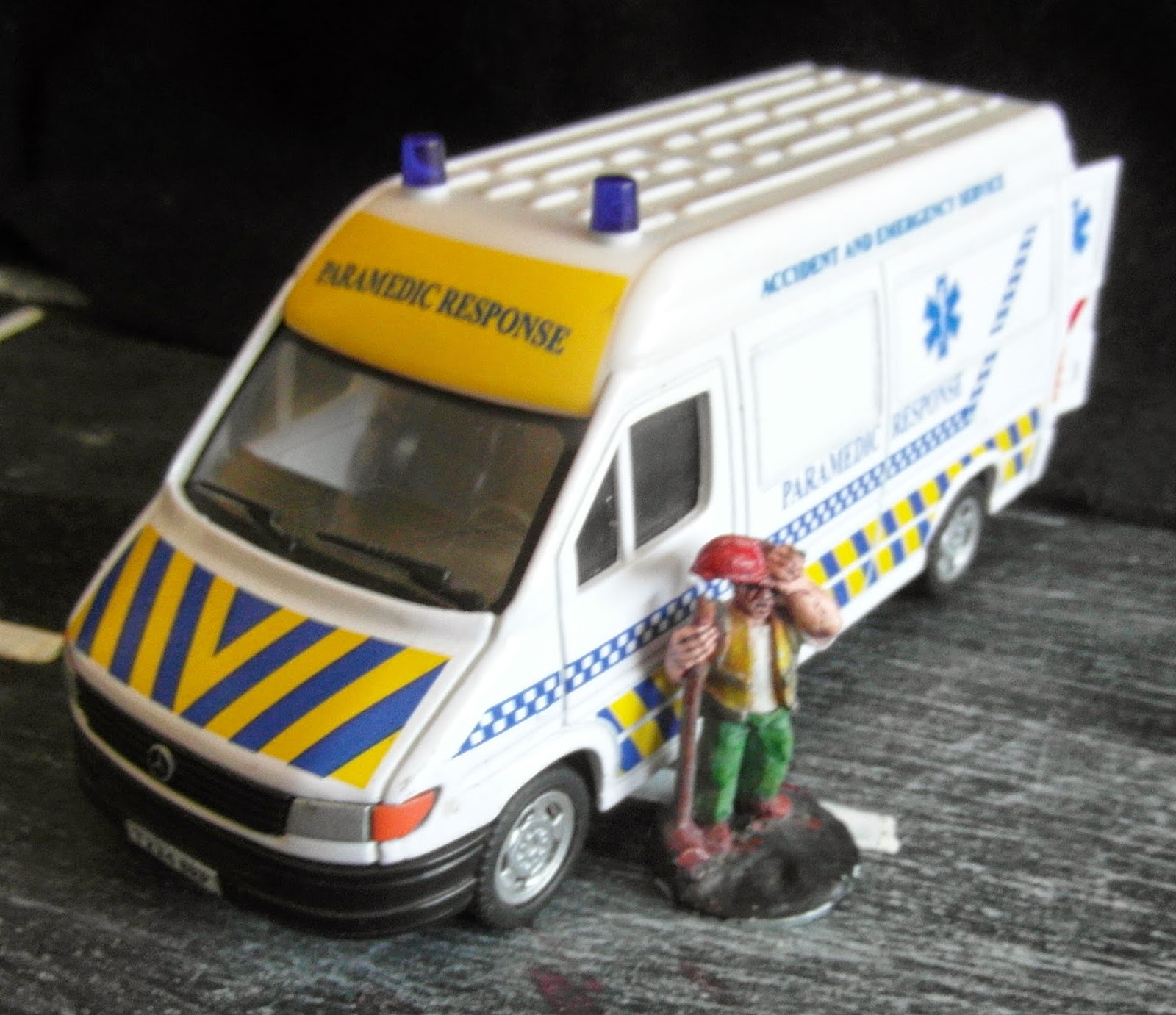 Whilst I had fellow blogger Mattyoo staying with me recently, I took the opportunity to show him our local table-top/car-boot held regularly every Saturday and Sunday. In the past I bought nearly all of my fairly large collection of Lledo vehicles there for my now stalled gangster project and knew that it was also a fine source for modern vehicles from many different manufacturers.Whilst Mattyoo spent his time buying enough vehicles for a small military convoy I looked to increasing my own collection of civilian vehicles. 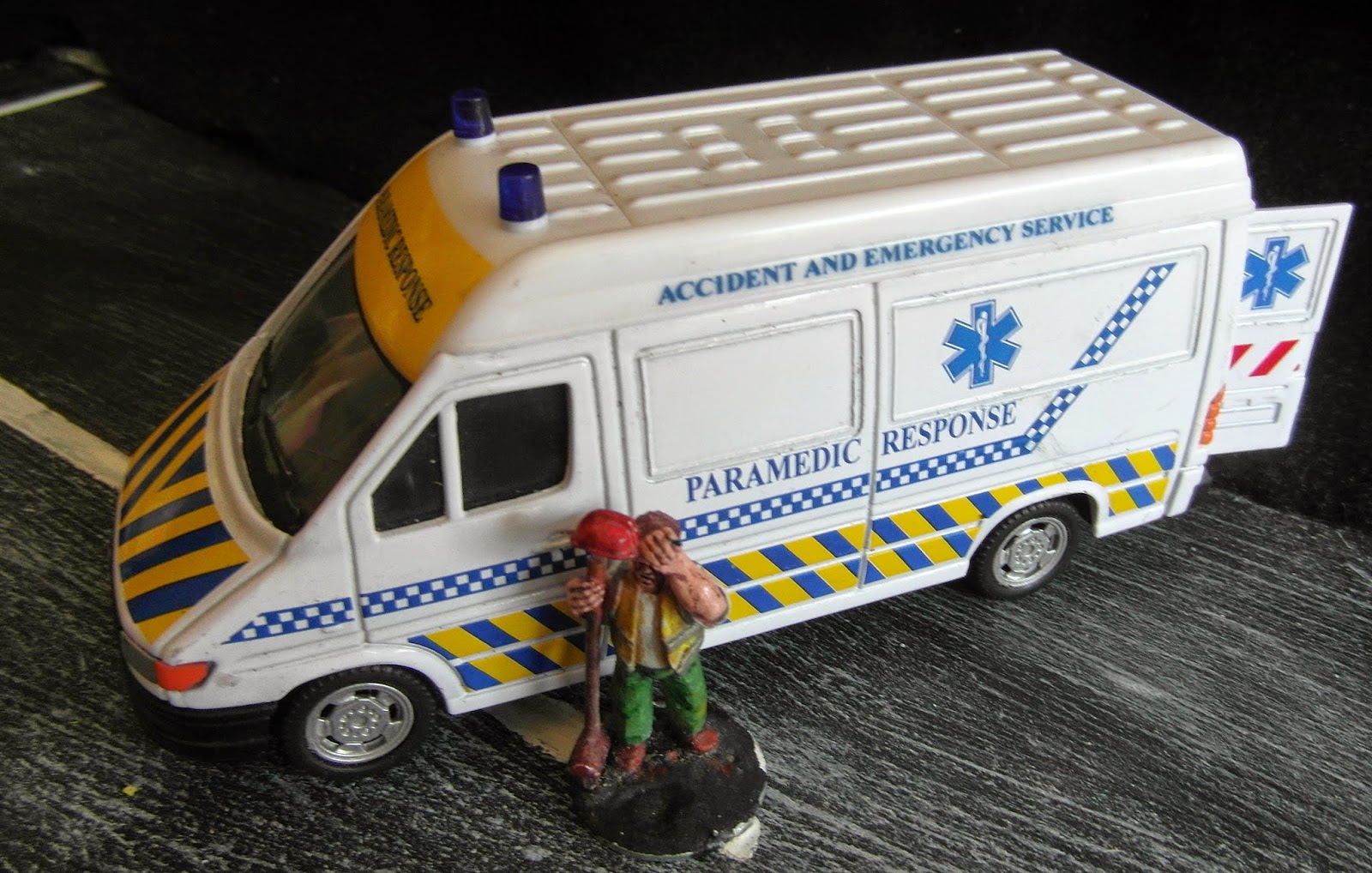 Most of the vehicles cost £1, although I did buy one that was £2 -shock, horror !
The ambulance above, (the £2 one) I think was a great find and scale-wise fitted very well.
Even though I do have two other ambulances, I did have one of them earmarked as a Hazmat vehicle and who can resist any model that has opening doors ? 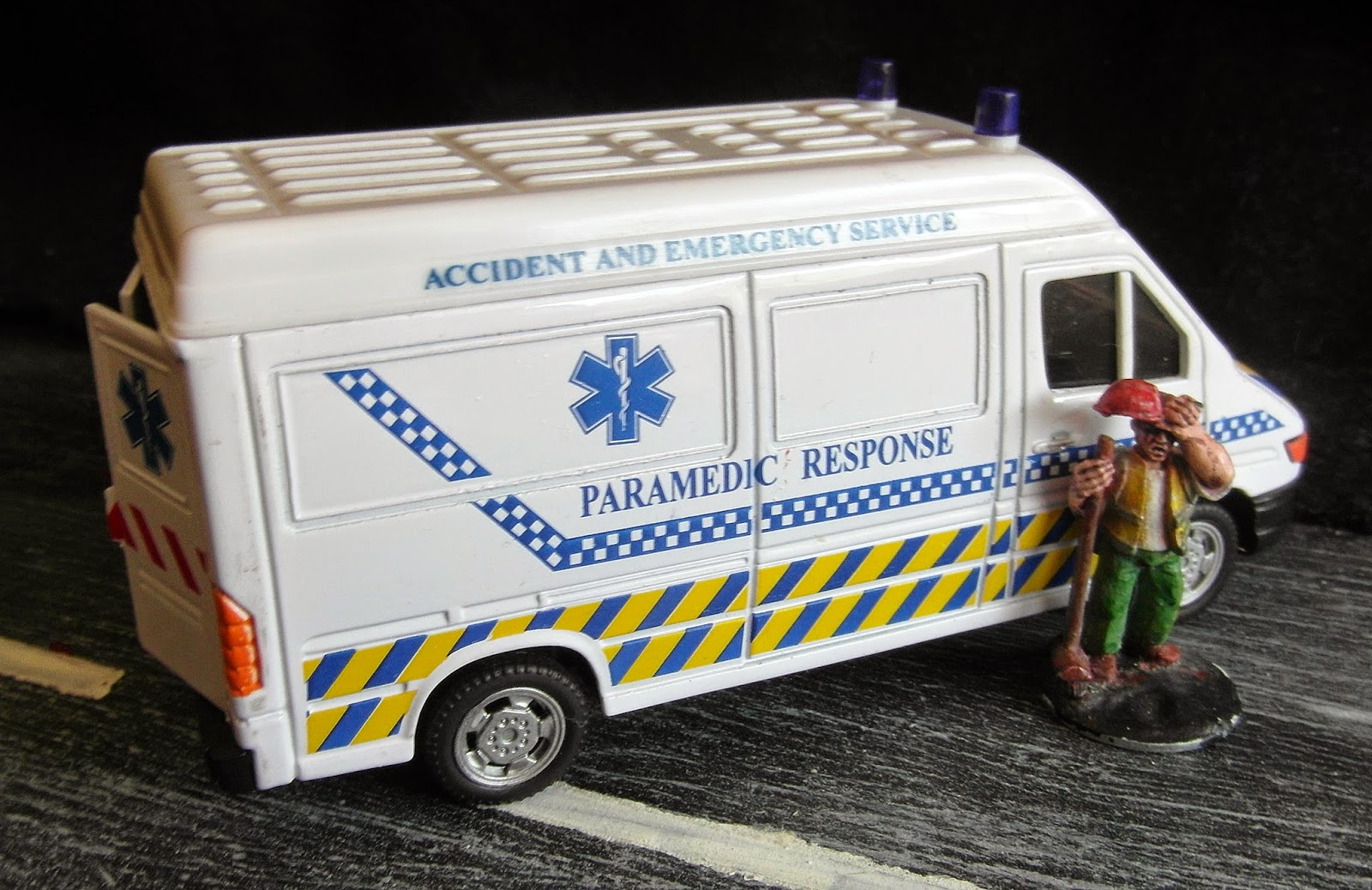 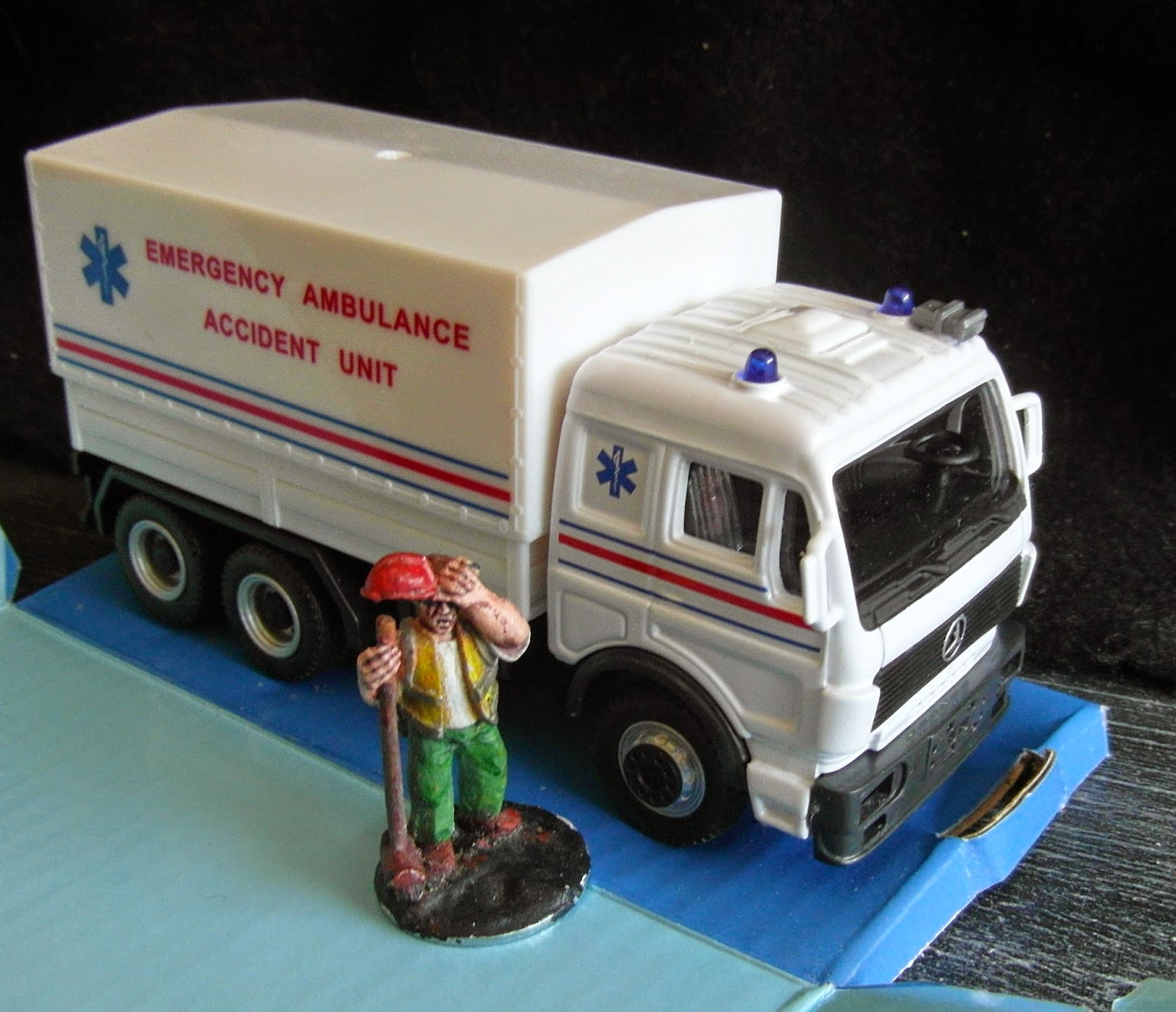 Whilst on the medical spending spree I also nabbed this one, which whilst maybe a little under-scale for the larger 28mm figures, it's still perfectly adequate for my purposes. 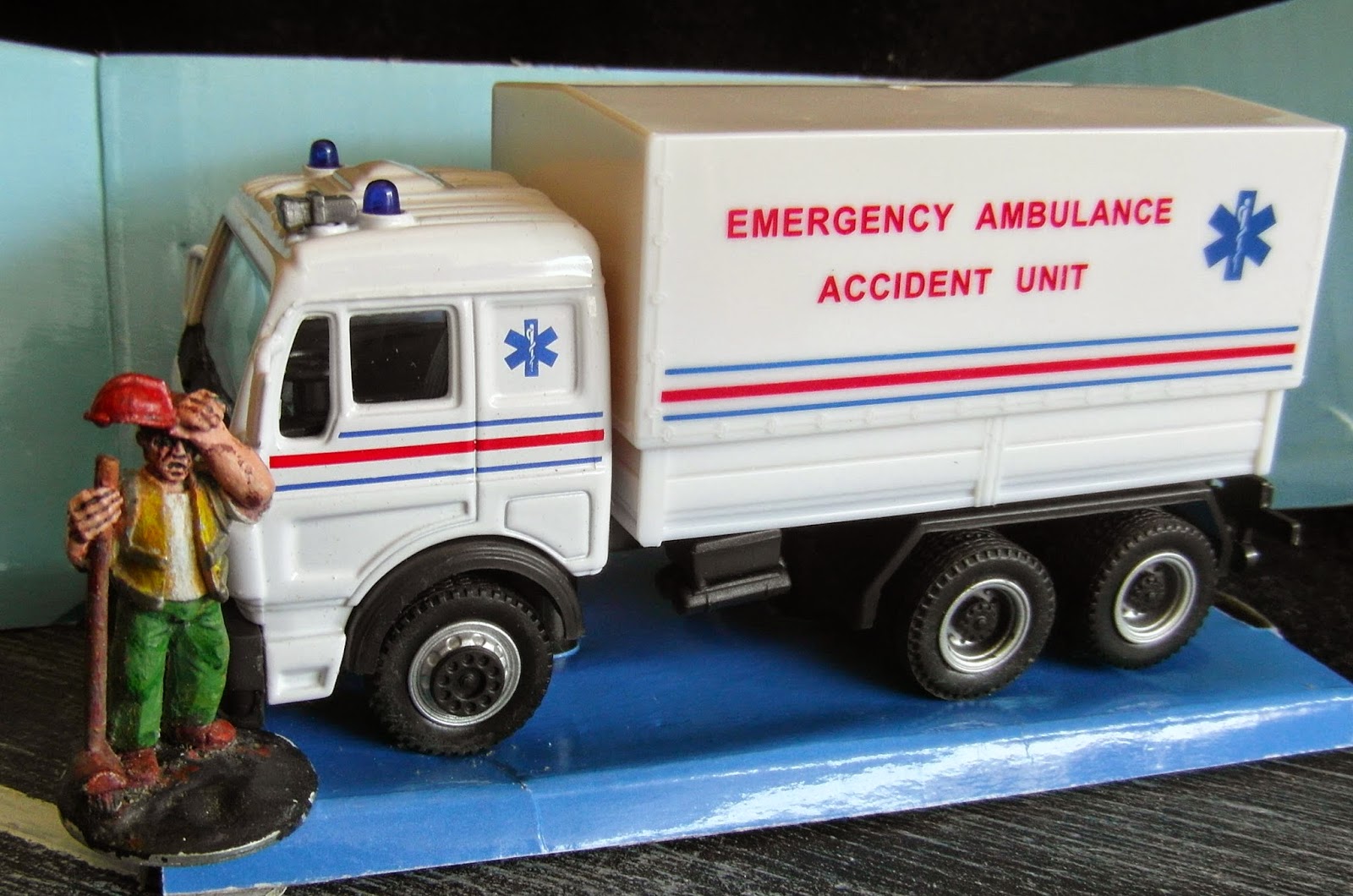 No opening doors (or much other detail to be fair), but another emergency vehicle nonetheless. 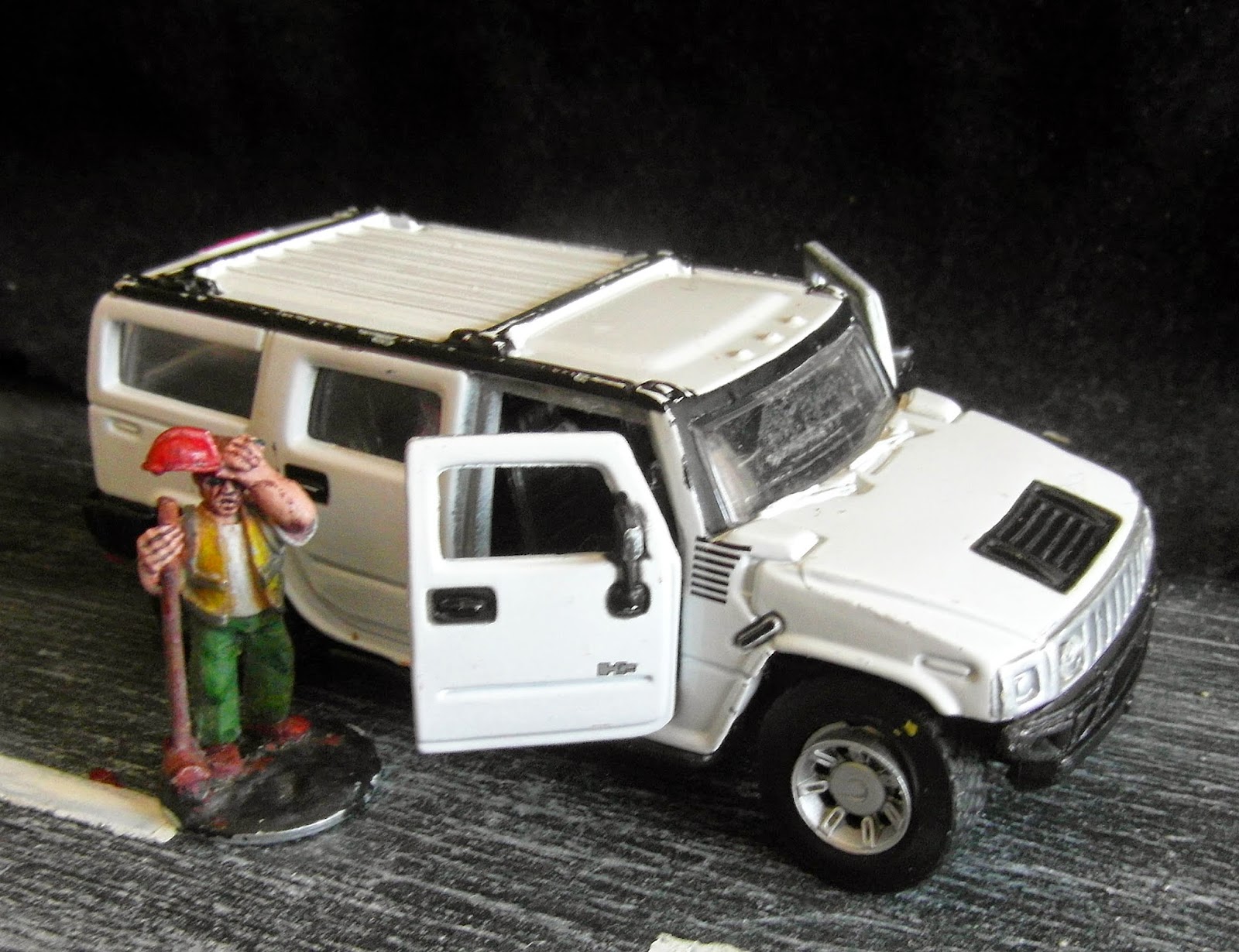 Next up was a hummer, which I would describe as "well worn" (i.e. played with), but at the bargain basement price, who cold resist it , (especially as it too had opening doors).
Hummers, of course, are probably iconic vehicles for the zombie apocalypse due to the yellow one from the film Zombieland.
This one will be left as is for some time to come I suspect. 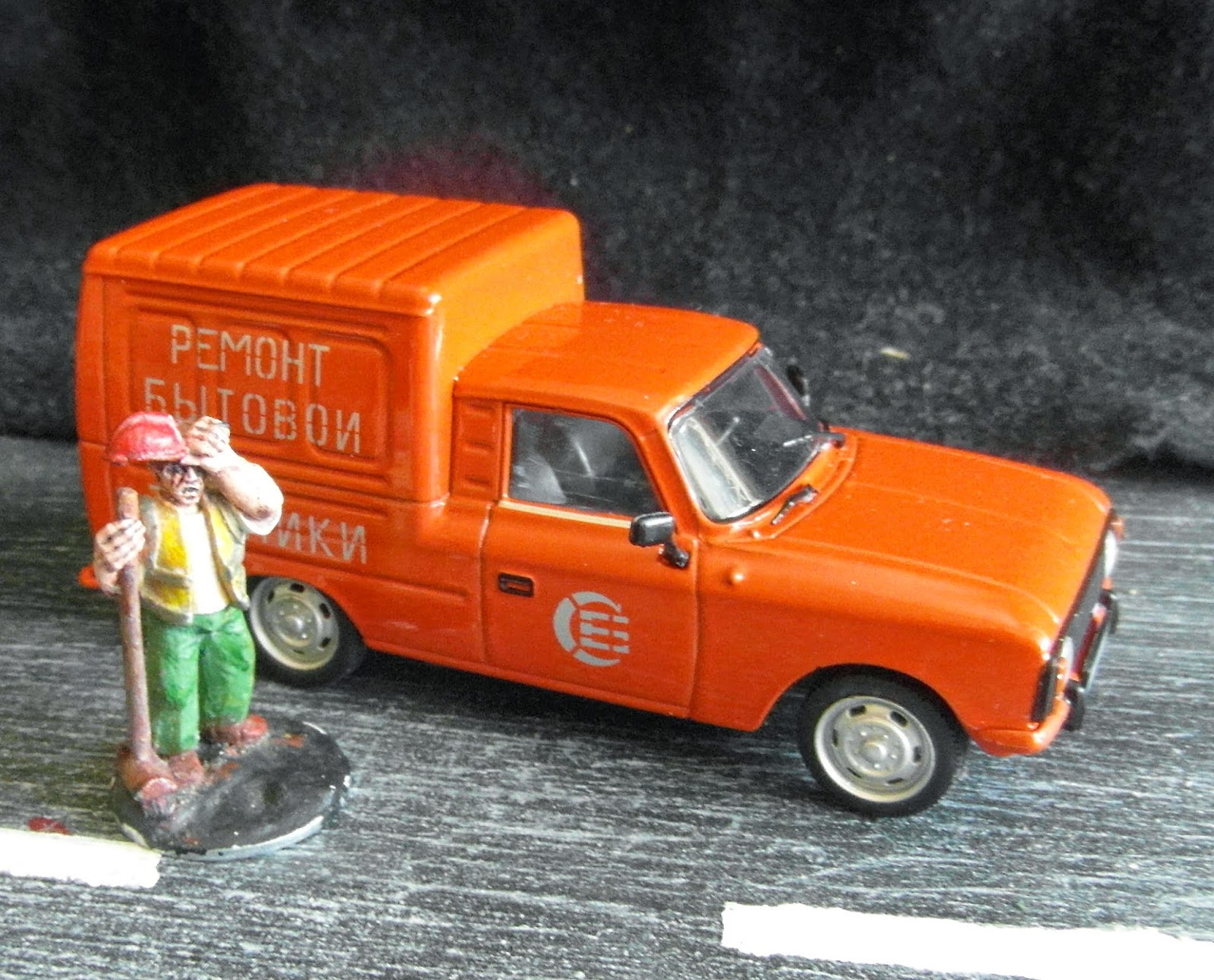 Rounding of my purchase were two of the Russian models that were sold with magazines. I've purchased quite a few of these now, but must have missed this one first time around. Other than it having a left-hand drive, it would make a superb conversion possibility for a Postman Pat van, it has the right shape after all. The Russian transfers (Decals to others) make no sense to me at all of course and in a perfect world they would be removed and the vehicle tarted up. As I'm not living in a perfect world, I'll probably never get around to it. 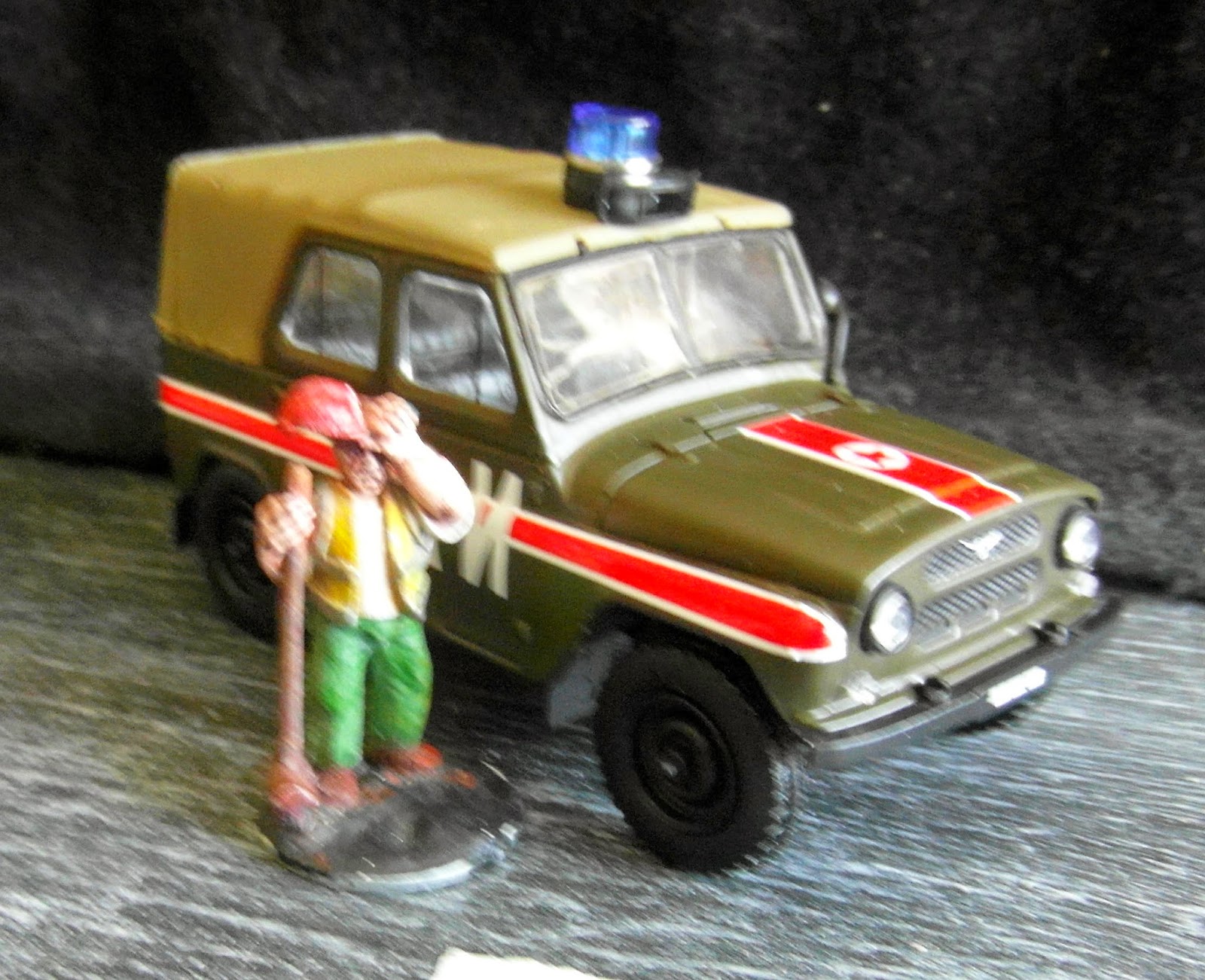 The final vehicle is the Russian "jeep", which I passed up buying on the last opportunity I had to purchase one, but buoyed along by my fellow shopper it was an impulse buy.
I was quite surprised by the interior detail in this model, as can be seen in the photograph below and will probably end up using this without the 'canvas' top.
It is one of those vehicles that will need a re-paint before use as it's too "Russian Military", even for my lax taste.
The 'sun roof' though does look a bit odd. 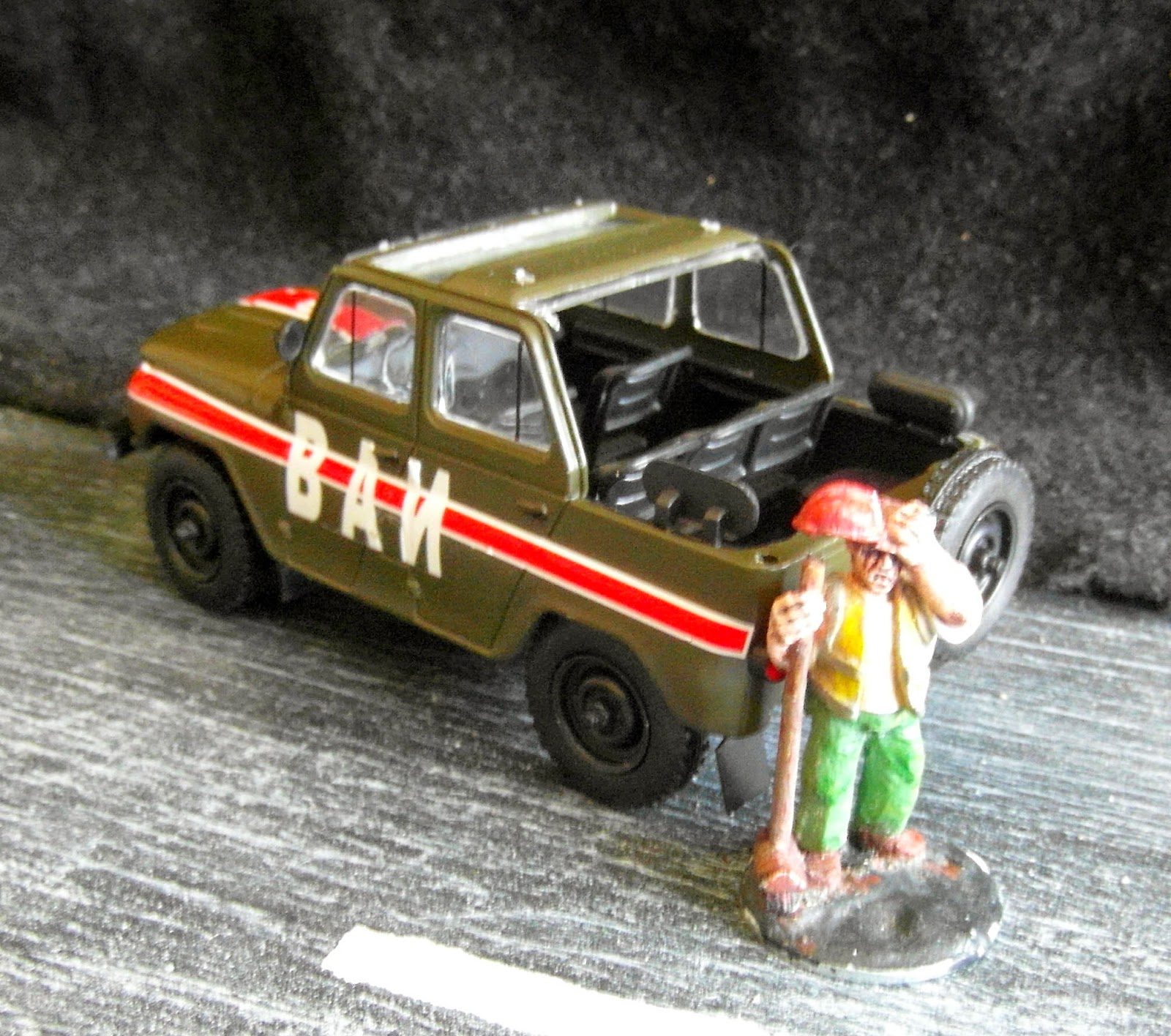 Other than the slightly undersized medical truck, I was very pleased with these purchases, but it does mean I will have to look for another vegetable basket to store my growing collection in (making five in all).

With these five vehicles and my purchase from a previous shopping spree, which I'll blog about soon that was all my holiday money spent up.

With the recent flurry of modelling card-buildings, I too have once more launched myself into yet another attempt at getting a passable card-building completed. I'll be  blogging about this in a future post too and hopefully I'll also be concluding the recent 'Burbs series of games.

And that is they say is it for this week, although I do have a new follower "Stephen" to welcome (it appears he doesn't have a blog to follow) and of course to once more say that your comments are both welcomed and appreciated.
Posted by Zabadak at 05:25