After yet another hospital trip which turned out to be my last eyesight check, I visited, what my wife has called my favourite shop, namely Poundland !
Along with all the normal goodies I buy (namely UHU, undercoat spray and sweets) I came across these vehicles. Now, they really aren't anything new and have actually been around quite a while but I never seemed to be able to catch them on sale when I had cold hard cash in my hands!  I did however find them tucked away in a box adjacent to, but not in the toy section. It was explained to me at the cash desk that these weren't toys but models  and the cashier could only sell them to me if they weren't going to be used as toys ! The whole thing was quite a palaver which I've thankfully never experienced previously.
The first picture shows two models which I've sought after for over a year now, namely yellow cabs.
I was very pleased with these and took both I could find, but there was another smaller
different cab/taxi style vehicle that I passed on. The next vehicle was yet another vehicle with checks down its side that could easily be a taxi, but it had no light on the top. At some time in the future I'll be trying to remove the checks.
The next vehicle is a van of some description and gives away the origin of these models as the lettering on the side (and on all their bases) is distinctly Cyrillic and probably Russian in origin. Alas I can't read Russian and their makes and models elude me.
The white vehicle suffered from an broken rear wheel that I couldn't repair, but I did replace.
Even if the vehicles had had English script on their bases I would still have had to read them to find out what they were.
My fourth vehicle, shown here is another van, larger than the first and does actually have some small insignia on it, but it's far too small to be made out. Again , unfortunately it too had a broken rear wheel (it's a double wheeled rear axle), but that glued on fairly easily. 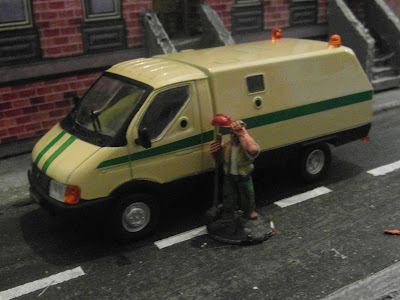 I did think it would make an excellent police van  or swat vehicle but for the two go-faster stripes on the front.
The next vehicle is yet another large van, more like an RV, but does have two orange hazard-type lights on the rear.
Again I have really now idea as to what purpose this vehicle is for, but I'll be using it as a general purpose RV type thing.
Given the very small windows on either side of the body it does tend to look more like a security van than anything else ! The second view of the other side also shows the side door for the vehicle, looking ever more like a security vehicle.
The vehicles I got seemed to just get more and more peculiar and the next was no exception.
It's obvious as to what type of vehicle it is but it does have an intriguing slogan down the red strip on the side of the vehicle.
I did think immediately that it looked like something from the forties or fifties and wouldn't look out of place in a VCBW setting except of course it has a left hand drive- like all these all of these models.


Whilst the vehicles bodies are a soft metal all the fittings on them are a very soft, delicate  plastic. and there are quite a few of them ! I can't really envisage the windscreen wipers or especially the wing mirrors lasting that long and I already know that the plastic wheels are suspect to wear and tear. 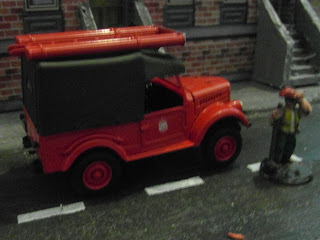 As I said above they did get stranger and this red fire-department "thing" is no exception.
It's hard to make out from the photograph, but there is a central ladder on the black canopy flanked by a pair of very solid looking hoses or pipes.
It's easy enough to recognise that there is some kind of device on the door, but what exactly it's meant to be is a mystery and will probably remain so. The insignia does look like a vehicle with flames above it though and the lettering underneath I suspect may say "Fire!" 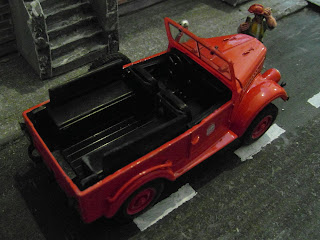 From this second photo the inside detail can be seen, two bench seat in the rear and a search-light can be seen on the drivers side.
I did think that I may have problems removing the roof but it actually just fell off so no problems there, probably the reverse will be the case and I'll probably have difficulties keeping the damn thing on, unless it's glued in place.


And the weirdest (imo) I've kept until last.
I bought this thinking it was an alternative to a very similar van I spotted (one that Postman Pat would have been proud of) but  it didn't have the prominent lettering on the side that put me off the first, so I snapped it up !.
It wasn't until I returned home and unpacked everything that I discovered that this was no ordinary van. (I blame the ongoing effects of the eye-drops I'd had)
I think the first thing to give it away was the plough on the front, closely followed by the strange roller underneath.

This view shows the underneath of the vehicle and clearly shows the plough at thefront and the roller set at an angle.
Both these features are plastic and would have been easily removed had I not had second thoughts on retaining them.
I thinks it's probably some form of gravel spreading and compacting vehicle (I'd already ruled out it use in snow) and you would have it wheels going over freshly laid tar either.
So it's actual use remains a mystery


There were several other vehicles in the box (including a military looking one with blue light on the top) which looked interesting, but alas my pocket money was all spent up.
The price I paid for these was obviously £1, but a model shop less than 50 yards from where I bought them was selling identical models for upwards of £4.99, so I was satisfactorily smug with my purchases.
Other than this recent purchasing foray, I've manged to clear my table and set up and played a game which I'll be relating next time.

And that's it for this week, as always your comments are both welcomed and appreciated.
Posted by Zabadak at 06:36