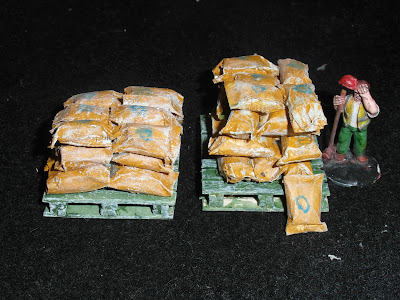 I haven't managed much in the last week as I've had a few days holiday in deepest Wiltshire, so this week I've decided to show some of the bits that I had made before vacationing. They're all made with the Construction/Building site in mind and although not yet glued into position, I do have an idea of where they'll fit onto the model.
First up is a couple of piles of sacks (cement ?), purposely designed to enable a figure to stand on. They'll be placed in a corner of the site (and will probably serve as guard towers for survivors). 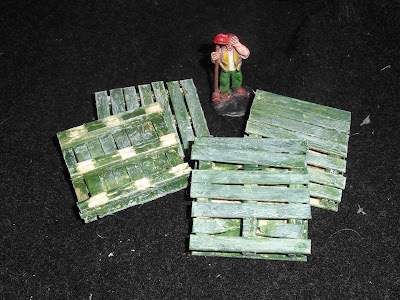 Both the palettes and the sacks I've made before and whilst these sacks  were made specifically for this model, the palettes were from ones I'd previously made and I've painted them green.
The two sack piles on the palettes will be glued in place on the model whilst the four other palettes will be left loose, for use on this and other models.
The palettes can easily be used to made a tall platform, barricades or some-such. 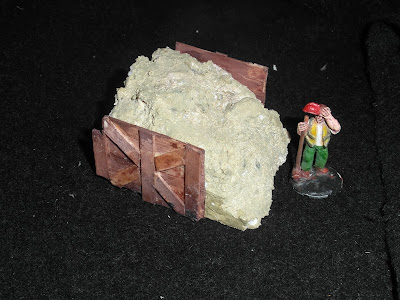 The peculiar looking object to the right is meant to represent a large pile of something like sand, but hasn't yet been fully painted.
The cut-outs in the supporting side walls are to enable this to fit onto the inside of the perimeter wall of the site. Originally the two side panels were  made as the front gates for the sites, but didn't look right.
The pile of "sand is polystyrene covered in gunge, whilst the side supports are of course coffee stirrers. The top of the pile just allows for a single figure to stand. 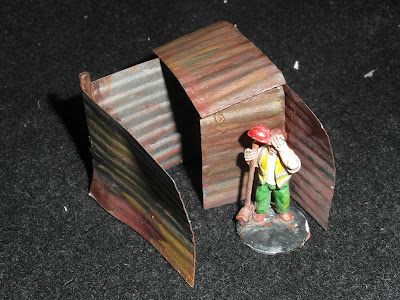 No prizes for guessing what this is meant to be.
If you're thinking "Is that what I think it is ?" then you're probably right and it probably is.
It's not quite finished, yet. along with most of the other things for this model, but it doesn't need a lot more done to it.
Before I left for sunnier climes I also started yet another building, but I hadn't made that much progress.
I tend to have a couple of things on-going to allow for drying times etc.

And that's it for this week, I'm endeavouring to catch up on the multitude of blogs I've missed and I have to also welcome my latest follower "Ray Hepburn".