This is not truly a demolition site, but does sound a bit more up-market than the classic title of "ruins"
The model has a footprint of about 10" square (25cm) and at the highest point is about 4 " (10cm).
The materials used in the making of this model were the usual mix of foamboard, polystyrene, cork (for the loose bricks) and of course the ubiquitous coffee stirrers !
This shot gives a view of how the model looked after I'd arrived back from holiday (3rd Sept) whilst the photo on finished model above was dated 8th September and as I'd worked on this and my construction site for no more than an hour out of each day, you can understand when I say just how easy a build it was.
Scoring the walls and cutting out rough wall shapes took about another hour whilst gluing them to the base (a soft plastic) took about another hour. 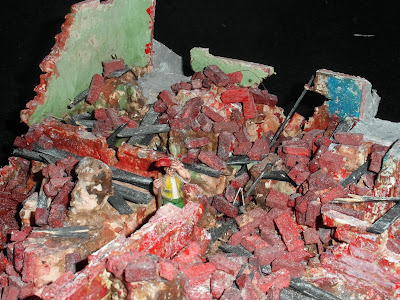 The foamcard walls were all scored to give the impression of bricks using a sharp pencil and a very blunt craft blade. I then painted it that horrible puke yellowy-green colour for the underlying mortar colour of the bricks.
I used polystyrene to bulk out the rubble on the interior and then all the non-brick surfaces were covered in a filler mixed with sand as I was using smooth finish filler. Once dried the whole of the now gunk-covered bottom layer of rubble was painted. 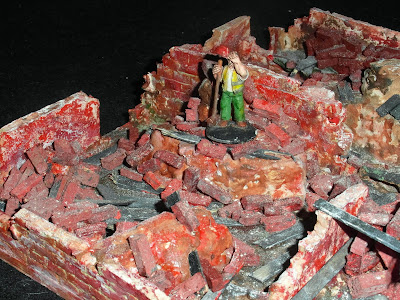 The two photographs above and to the left show well the polystyrene bits used, (basically all the brown lumps and bumps that aren't bricks !).
Coffee stirrers where lightly sprayed in black and grey and either bent and snapped before spraying or in some cases afterwards to represent floorboards etc.and then glued in place around, over and in the polystyrene "rubble", always with a mind that figures will need a  place to stand  in the building too.
After the wooden bits were added I then proceeded to put bricks on the model which I'd made as an off-shoot from building my streets. 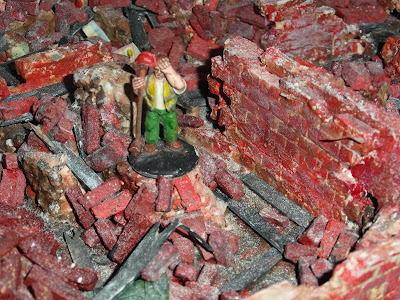 Again, the bricks weren't placed completely randomly as I always had it in my mind that the resulting ruin had to accommodate figures, something I'm always aware of in all the models I make.
Amongst the rubble I did place a few detail bits that are quite hard to spot, such as a book (just behind Sid's head in the photo to the right), a newspaper (of course) and I also used the now redundant wooden back door from the construction site (the eagle-eyed amongst you may just be able to make out the green corner of it in the bottom centre).
Internally I placed two walls back to back down the length of the building (you can clearly see this in the above photo) to represent the divide between the two tenements.
To finish off the general ruined feeling, I carefully "powdered" the whole model using filler powder (unmixed obviously) and gently shook off any excess.
You may also have noticed that the inside front of the model has painted walls one in light green and the other blue, representing the inside ground floors of the two buildings.
In real terms this building took about 8 hours to make, but as I waited between each stage for the various bits to dry in place  it still took about a week to complete. I was only working on this in-between drying times for my construction site and seemed like a bonus when finished, as it was actually complete before  the construction site !

And that's it for another week, I'm now doing the great after build clean-up and setting my table out for my next scenario.

Finally let me welcome my latest follower Dave Cooke, who has an excellent blog here , some of you may also know him by his alter ego of Maxshadow.

Thanks for taking the time to read (or at least look at the pictures) and as always your comments are both welcomed and appreciated.
Posted by Zabadak at 07:37