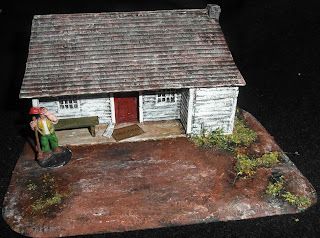 I've struggled to find any enthusiasm over the last week or so but nevertheless I've stuck to the task of completing the Farmhouse - or at least I've got to the stage where I'll not be doing anything more on it, - I'm that bored with it now!
The reasoning behind the larger-than-necessary front to the base was that I'd contemplated putting a picket fence to the front of it. Several permutations later of the three inadequate fence pieces that you get with it  and I gave the idea up, shelving it until I get some more fences (I'll not be holding my breath on that one). 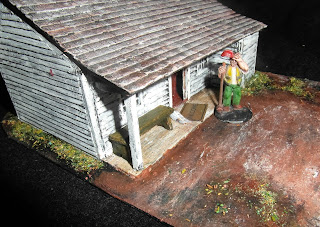 I've shown two photos of the front of the house, to give some idea of how small the model is, both in height and width. It's probably an ideal  size for most wargames, but is a bit smaller than I'd like. (For the actual dimensions see last week)
I've omitted two of the three front porch supporting posts, leaving the single one shown to accomodate figures more easily and in additiion I've glued in an additional cross-brace to support the remaining post for when the roof is detached. The bench at the front is scratchbuilt and is not as yet a permanent fixture, as I'm still undecided about it. 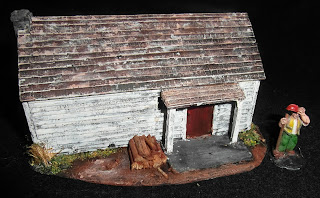 The rear of the building has had a small porch added, the roof of which was a cut-off from barn project, the upright posts are scrap and the wood pile is cut up pieces of garden cane.
I've used garden cane for all manner of things in the past, especially for stockades and the like, in preference to the uniformity and slenderness of  barbeque sticks.
The bits of "grass" dotted around the building are of course sisal and the patches of green are flock. 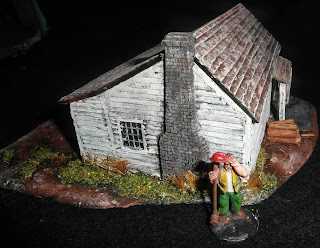 The side view of the building  has no interesting features in particular. I was unhappy with my initial efforts at the chimney stonework, but I eventually got it to a point where I was happy enough. 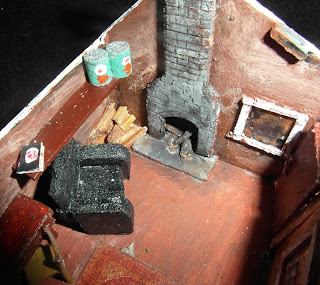 The inside of the building is really tight to get any detail in at all and still leave enough room for figures
The chimney breast and hearth are both scratch-built from plastic and card respectively.
I've added a shelf, armchair and side table (all scratch-built) along with the chair provided in the kit.
Another log-pile in the corner and some "embers" in the fireplace (from cane) was all the detailing I allowed for this end of the room.
In the centre-right of the photo a door can just be made out, which leads to the peculiar front add-on.
On the floor I've added a paper carpet, goodness knows from where I got it from. 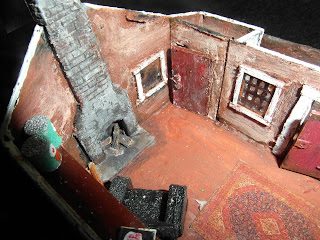 Another view showing the chimney end of the building. I've deliberately tried to keep the internal areas in front of windows clear of clutter to allow figures to stand in front of them. The extra bit of wall and door were of course scratch-built - frame, plastic; door, card. 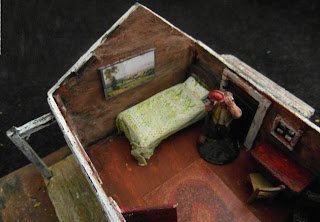 The other end of the building shows just how tight space is inside.
I've managed to cram a single bed in (just) and the only other detailing I've added is the "painting" above the bed.
This photo also gives a good view of he extra support  I gave to that front post and eagle eyed readers will notice the bench is not present !
What the photo doesn't show is that Sid the sweeper only just clears the slope of the roof. I guess no figures holding their weapon upright in here ! 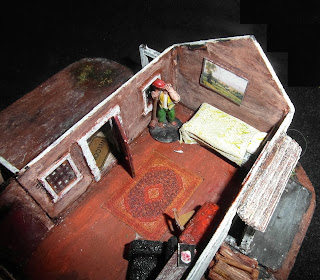 View of Sid just crammed in behind the bed, and as a reminder Sid is on a 20mm washer, those of you with figures on 25mm slotta bases will probably find this building even more cramped.
In case you were wondering what was behind the internal door, all now is revealed : 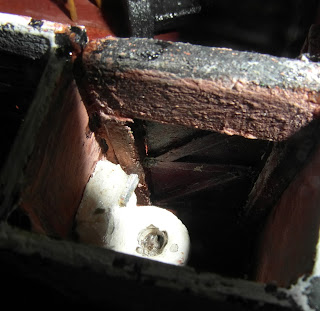 Sorry, no hidden armoury or stairs down to a cellar or fallout bunker, just the "facilities".
Finally here's an aerial shot of the finished model (sans roof): 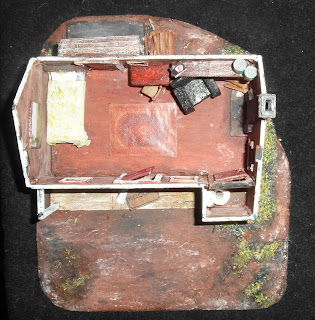 And that's it for this week.