It seems like many other of my fellow bloggers I too am beset by lethargy.
As I've used this building in both of my games so far I thought I'd show it this week (a quick recourse, for having done next to nothing this last week).
This model comes from the Microtactix "Twilight Streets" Set #2. Those of you familiar with these sets will know that originally the building is depicted as derelict, with its windows boarded and bricked up. I didn't want a ruin as such but it was fairly easy to "renovate" the ruin to its original former glory. 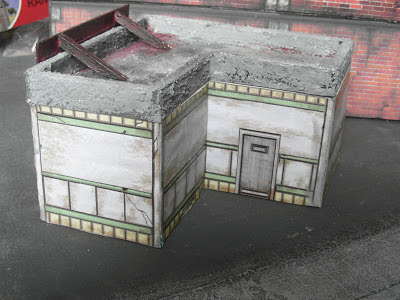 Sets #2 and #3 of the "Twilight Streets" series are both under-scale for 28mm figures (set#1 has a "heroic" alternative) and the model had to be scaled up.
As I was already doing quite a bit of photo-shopping to the model I also decided to give it a 'L' shape, as the original was a very plain box type.
One feature I didn't incorporate into the model that was on the original was the indented back door, which although would make pretty good cover , did mean there would be less room inside for figures. 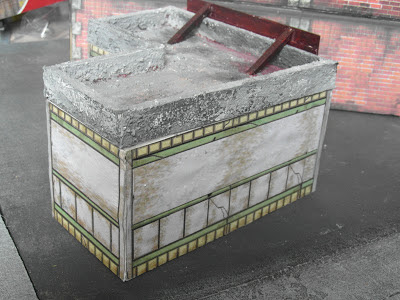 The remaining two side of the building are nothing spectacular, the shorter back and sides merely being copies of the other walls, copied and pasted.
The sign board on the front of the building was also re-modelled as a lot of the lettering was askew or missing.
All the walls and roof are made from 5mm foamcard,whilst the shop sign is card supported by coffee stirrers. 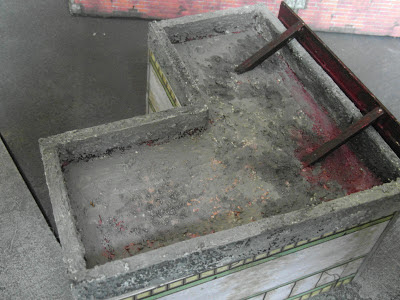 The roof was gunged over with "Modelling Paste" (which the label says is "For use on canvas in collages and for decorative deigns") which is a bugger to work with as it's very, very gritty and dries to the constituency of concrete embedded with glass., but as I got it for nothing it serves my purposes well.
The gunge also takes acrylics well (it must do, it says so "Dyeable with acrylic paint"). 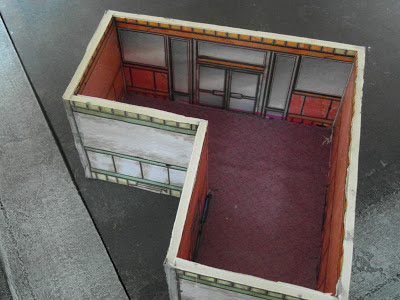 I made a token effort on the interior, again with the help of photoshop, copying and flipping the walls before finally giving them a wash of colour. I thought the fade pink gave it a very retro salubrious look.I do have intentions of outfitting the interior with a desk (or counter), a chair and possibly a safe which will occupy the 'L' part of the room, with a central display in the main area of the shop and some shelving for a wall or two. Numerous adult posters will decorate the walls of course.The carpet is actually patterned but it's difficult to make out on the photographs. 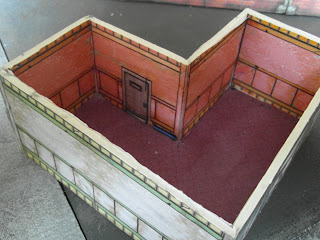 The base of the building is a scrap of some form of plastic sheet that I was given.
This was actually my second attempt at this building, my first was based on the original form of the building (i.e. a shoe-box) and although I was not too unhappy with it I abandoned it just as it was virtually finished.

As you can see this version had actual see-through perspex windows (no opening doors though) and it took an age to cut out the panes. However, as it was nearing completion it struck me just how large the front doors were.  I hadn't actually over-scaled it as such, but the photocopier had !  Apparently there is a feature that allows the print to "fill the page" or whatever and hence Voodoo Jake's (Mark 2) came into being.

That's it for this week it just remains for me to welcome my latest followers "Paul Smith" and "Hobby Worker" and unless you haven't heard Bryan (Vampifan) is recovering although he's still in hospital.

As always, your comments are both welcomed and appreciated.
Posted by Zabadak at 03:47