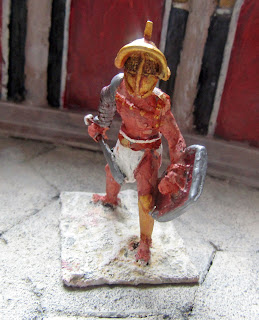 Spectacles were what the events in the arenas/ampitheatres were called by the ancient Romans; everything that hapened in the arena was part of the 'Spectacle',
The photograph on the right shows the Murmillo that I started way back at the end of April, prior to my unexpected hospital stay. Since returning from hospital, I've endeavoured to get him (and the 'umpire') finished and although it's been a big struggle, he's as finished now as he's ever going to be.
He can, of course, now be considered for any future spectacle in my arena. It was a struggle getting him finished mainly because of the two paintbrush tips I see or the problem I have of getting the paint in the correct place when one of my eyes is shut (stopping the paint-brush tip duality).
I must have seemed a bit better as my wife booked me in for an opticians oppointment last week and consequently I will be recieving my new spectacles next week, to enable me to carry on with the specatacles in my arena ! (I'll get my coat).


So that's it then for this week, not a lot, but at least it still counts as a post right ?

Since the optician's examination, I've found out that my 'good eye' (my right one) is now worse than my left one (the bad eye) - not wonder everything is getting blurry ! Hopefully when I can see better (after next week's post) I may have enthusiasm to paint or finish model - who knows?

Thanks for taking the time to visit, hopefully there was something of interest and as always your comments are both welcomed and appreciated.