A Battered Box of Folders 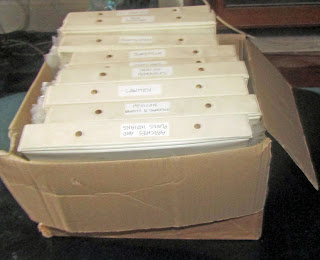 This was yet another box that I rescued from Bryan's (Vampifan's) collection - probably rescued from ending up in the local dump. It's a box of ring binders (rather than the folders of the title) that I decided to rescue, largely because they contain many of Bryan's art-work and countless hours of home-made file cards, one for each of his characters for his Western games - another reason to rescue them as it's a gaming period I'm also very interested in !
Each of the nine binders has its content's title on the spine and contains an A5 card with a charcaters information on it, all enclosed in a plastic wallet.

There's at least 25 character cards in each of the binlders and as some of the fictional ones have notes when they 'died', means to me that they were used at some stage in his gaming. I have some ideas of what he did with all these, which I'll get around to next week !
So that's it then for this week, I did have two quick gladiatorial games last week (lost both, but one gladiator survived the wrath of his appeal to the crowd). I also finally finished  the metal gladiator I had started in the back-end of April, before being laid up in hospital.
Thanks for taking the time to visit, hopefully some of it was interesting and as always your comments are both welcomed and appreciated.
Posted by Zabadak at 06:18