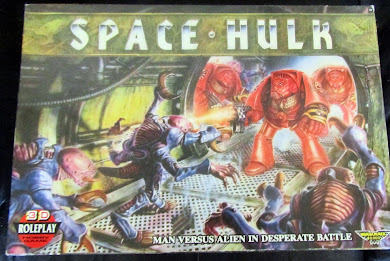 Whilst not having anything to do with wargames or wargamng, after thirty-plus years this is still a great game even if GW did try and break it (IMHO) with the supplements "Genestealers" and "Deathwing" .
For those unfamiliar with this game (is there reallyvanyonevwho hasn't heard of this game?), it consists of  geomorphic tiles as the playing surface for one player to use his marines in completing a task opposed by the other player's "Genestealers". In the box your get ten marines and twenty genestealers. Somehwere down the line I seemed to have gained another set of ten marines.
Initially the game was bought by me to play with my eldest son, as he was into 'Fantasy' and of course he wanted all the pieces to be painted, which I duly did whilst we both learned the rules.
The game itself I found intriugingly easy to play, but hard to master, the initial mission "Suicide" run was difficult, but not impossible to win as he marines  and it still remains my favourite  scenario to date.
The new supplements came with new rules, new Marine weapons and new Marine models, most of which I disliked but still made the equivaent conversions with both the original and subsequent models.
Finally I got  a second mortgage and paid for five metal Marine figures with the new kit.
Here's the photographs:
So why all this and why now I hear you ask ?
Two things, firstly it shows I do have some fantasty /sci-fi figures and secondly I am getting more and more desperate for things to post about, (these have also been staring at me across the room where we played our gladiator games too !)
So that's it then for another week, hopefully there's something of interest in this post and of course, as always your comments are both welcomed and appreciated.
Posted by Zabadak at 08:43