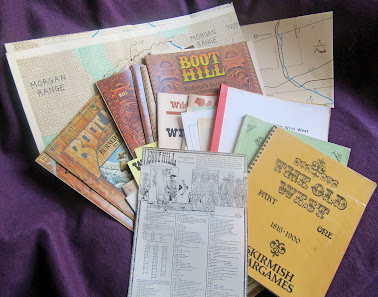 Amongst the few papers that I rescued from Bryan's (Vampifan's) collection were several set's of rules, maps and notes from his wn western games. The  rules are date from the 1970's only two of which I recognise. The biggest part of the 'haul' is the (then) well-known Boot Hill, a rpg with several module. The loose covers of the models all have a map (or maps) on the inside which realate to the adventure in the module. Boot Hill 'suffers' from the same feature of a lot of 1970's rule in that it has a mass of detailed statistics in a very  over-complicated (imho) set of rules.
The second set of rules "Wild West" has a single module, but has two addtional maps with town mps of both the centre of Tombstone and Dpdge City of their reverse.
Finally there ar copies of Book one and two of "The Old West" skirmish rules, in much better states thn my single, coverless, well-worn, earlier edition.
Here's the pics:


I hope this insight shows just how much of a fan of western games that Bryan was. I must admit it came as quite a surprise to me that we shared such enthusiasm for the wild west era, if only we'd have known this over the ten years or so I knew him!.

That's it then for this week, thanks for taking the time to visit, hopefully it was worth your time.

In other news, I've reverted to my "Firefox" browser to write this post, rather than having to use Microsoft's "Edge", which I don't like.  Hopefully Blogger will behave itself for a while now that the previous problem seems to have been sorted.

Until next time then, that's it for this week as always your comments are both welcomed and appreciated.