Spartacus, the Board Game 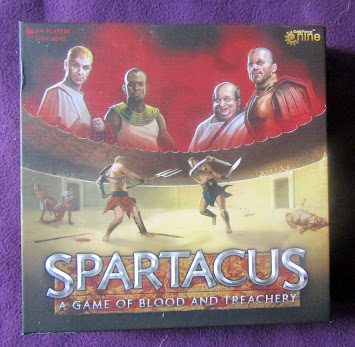 About a week before I was rushed to hospital, I'd bought the board game "Spartacus, a game of Blood and Spectacle", fairly cheaply (well under £40). The game itself is based on the well-known TV series and simply oozes theme from the box artwork to the contents, with many characters instantly recognisable and just about any named character is represented. Those characters that are not in the game are, of course, represented in either of the two supplements - both of which are sadly not in production and would probably need a second mortgage to purchase.  The supplements, make provision to make the game six players and give additional cards and some figures. The photograph below shows the four figures (tokens) that come with the game and don't relate at all to their gladiatorial purpose, they're merely one for each player.

Other than some 'housekeeping' needs, the first phase of play is the "Intrigur" phase, were deals are made, schemes are untertaken withor without assistance and general spying and skullduggery can be undertaken. This is an important part of the game, shaping alliance and enemies etc.
The auction is the second major phase of the game and will gain greater importance as the game moves  n, when cash is everything.
The last phase is the Arena phase, bidding to host the games, invite gladiators etc. all with the intention of gaining influence over the others.
So how does it play out ? Well, I  don't know, the chance of getting four willing participants is currently not on the horizon, but I can sit in hope - and the game does look good !
Well that's it for another week where I probably pushed myself far too much and regretted it very quickly so this week I'm taking it far easier.
Thanks for taking the time to visit, hopefully there was something of interest and as always your comments are welcomed and truly appreciated.
Posted by Zabadak at 03:43