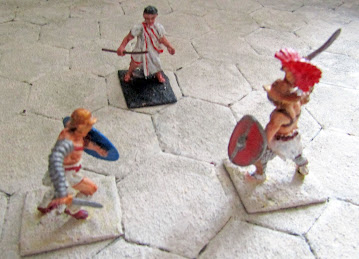 Just in case  you're wondering what a "Summa Rudis" is (or was), he's the civilian umpiring a gladiator combat, with the iad of his stick and no doubt a stern look.
In keeping with my continued play.testing of "Blood in the Sands" and with my renewed enthusiasm for gaming I decided to convert a figure to represent this figure and for the first time this year, picked up a scalpel and paintbrush. Although he's not finished yet, I needed to show that I'm doing something hobby-related. In the photograph on the right, he's the chap in the middle (with the stick).
He started out as a HaT Celeberian light infantryman with helmet, spear, dagger and buckler.
I also found my only metal gladiator, an Irregular 54mm iirc.
Although currently he too, is only half-finished and I've shown him alonside the left-hand gladiator  for scale puproses. I think he's a tad on the small size, but still more or less compatible with other 54mms.
Scratting around the various bits of Byran's (Vampifan) collection, I'm still finding bits and piecesthat have yet to be shown.
First up is a bag of ten bases:
Next up are the three mystery boxes:
The last box had a strange, elf-like, Pinochio figure (2nd left above) armed with a bent pitchfork on his shoulder, whom I have no idea of what he is, save for being  peasant. The others are Germans, as is the legless chap on the right.
Not in a box, but in a bag (in a box) were the following esoteric collection of bits and pieces, mostly architectural, gargoyles and the like.
That's it then for another week hwere I;ll be busy re-doing new quick reference sheets for the adjusted rules and trying to find an opponent to try out the new rules (version 1.2 !)
I've already sent out two packages (one of which has arrived and I'm still awaiting payments for postages from others.
Thanks for taking the time to visit and as ever, your comments are always welcomed and truly appreciated.
Posted by Zabadak at 05:46