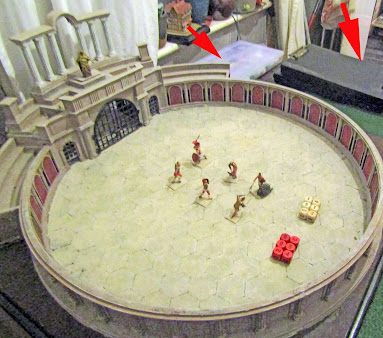 So this week saw me play a game with two real people, the first time in well over a year !
To be completely honest, I didn't get to play, but I wrote notes and took photographs and helped the two players understand the game mechanics, when to throw dice etc.
The photograph on the right shows my set-up for Gladiator games, a hex marked arena. I had three matched pairs of gladiators, to fit all six types of gladiator type in the game. The photogrsaph also shows the  three pairings, a dozen dice to be used by the participants, my box of dice, counters etc. (marked by the left red arrow and the two clip board that will hold the players' character sheets *red arrow on the right).
I've had a great interest in gladiatorial combat for over forty years and haven't found a set of rules that I've liked, until now.
I have been following the blog "Adventures in Lead" and have been asked to playtest his reincarnation of his rules, that have been years in the making.
Our first game was a disaster, I forgot or misinterpreted many of the rules (I was the only one that was meant to know the rules). However after a quick break we resumed with us all having a better idea of what we were doing.
The pair we used were a Murmillo and a Thraex, both medium types of gladiators.
In the final stage the Murmillo Gluttenus manouevred Stupendus up against the arena wall and battered him with some good dice rolling. Stpendous dropped to the floor, badly wounded in the chest and exhausted. Stupendus had to appeal to the crowd...

Haivng put up a good fight,  Stupendus appealed to the crowd and was granted a missus - he would live to fight another day !
There is a bit of paper work in the game, but far, far less than I was used to, using the old Avalin Hill game rules. The dice decided what you could do each turn, but Gladiator traits allowed for greater variations.
The author, Frank Sultana has about twenty playtesters and as seen on the LAF board, they're all seem to be actively testing. The thread on LAF started in 2013 with the first incarnation of these rules, but the last few pages deal with this second version.
The game played a bit like "What a Tanker" I guess, but has a very good 'close combat' feel.
Turn initiative is diced for every turn, players using an IGOUGO, system,  the player with initiative expending his dice then the othe rplayer does the same. There is still interaction between players as they use defence dice and other dice in the other player's turn too.
I had a good time and the players both said they'd like to have another go, so that's as good a sign as one gets for a game. - I can't wait.
In other news:
I'm intending to package up everyone's requests this weekend coming and  get the postage costs sorted sometime next week, so all those involved please be patient, I haven't sent a parcel in a veyr long time (I honestly can't remember ever sending a parcel).
That's it for another week, thanks for taking the time to visit and hopefully finding something of interest.
As always your comments are welcomed and truly appreciated.
Posted by Zabadak at 04:41