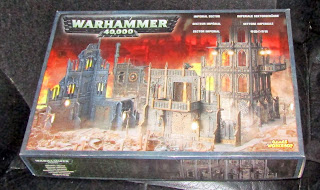 In a week where I played three gladiator combats and  was inflicted shortly thereafter  a with bug that has laid me out, drained of energy with several sleepless nights, I managed to find yet another box from Bryan's (Vampifan's) rescured ites from his collection that I haven't shown - until now!
The photograph on thie right shows the box in question, but don;t think there's anything Warhammer related in it as the photograph below shows:
All these vehicles are extremly well made, and very, very, solid. The craftsmanship that went into these is second to none, I've  tried my hand at making card vehicles and came nowhere near the quality of these.
My three gladiator combats, using version 1.2 of Frank's rules , that I've been playtesting (with version 1.3 on its way so I'm told) were all thoughorly enjoyable affairs. The first, my Thraex versus a Hoplomatic was over in two turns with me being unable roll low dice (I think I had three double '6s' in the first bout) , whilst my opponent couldn't roll higher than '5' total, on two dice.
the photographs below show the way the contest went.
The second fight with identical gladiator types went the same way as the first, lasting one and a half turns (as I went first) and in my second turn I manged an ouright kill - the firt time this has happened in the many games I've now played.
I kept my Thraex for the third game and he chose to fight as the more heavily armed Murmillo and although the game lasted  a good many more turns than the first two, the outcome was the same. My gladiator suffered a couple of light wounds whilst my opponent was a bloodied mess. In the last roll of the game he had to appeal to the crowd for his life and rolled a magnificent double '6', ensuring his survival !
In case you were wondering why Starz was in the title of this post, it's merely because I've been re-watching the Starz' TV series of Spartacus !
That's it then for another week and despite the enjoyment of the games it has been a struggle getting this post done.
Thanks for taking the time to visit, hopefully there was something of interest.
Of course, as always,  your comments are  bothe welcomed and appreciated.