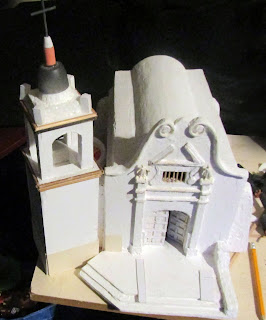 What I would normally do in a single week of effort (even at my rate) has taken seven days, spread over two weeks, with real life rearing its ugly head to prevent me completing the church tower. A routine clinic visit and a weekend away were the main culprits, hence just seven sessions of hobby work. There was a lot of waiting for glue and plaster to dry toov(of course).
The photograph on the right shows the assembled towere, awaiting its covering of filler.
Here's the rest of the photo record:
The bits for the top of the tower, in the photograph above, were, left to right: a piece of polystyrene, top of a Kinder egg top, a piece of cork, two beads and a piece of sprue. The kinder-egg/cork arrangement was discarded in favour of a perspirent spray top !
The tower still need a lot of filing and sanding down before fitting/attaching to the church and it'll then be glued in place. It also needs four pieces added to the four small block, which I'm still sourcing.
Given all the issues I've had though I'm happy enough with the progress I've made and another few sessions will get it to the stage where it can be painted with the rest of the models.
That's it then for this week, thanks for taking the time to visit and as always, your comments are both welcomed and appreciated.
Posted by Zabadak at 07:03