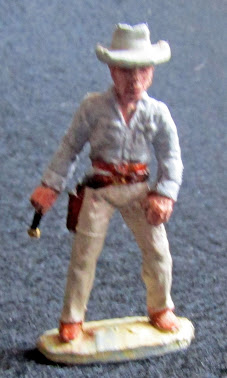 500 is not the name of some new Hollywood blockbuster, but it is a fitting title for my 500th post, much better then "Gunfighter #5", which is what the photograph on the right is. "Britt" is the knife-fighter of the gunfighters, using an anachronistic flick-knife (switch-blade to our colonial cousins). The last two gunfighters of the set are proably the most difficult (for me at least) to paint, "Lee" (a bit of a dandy) has a thin striped waistcoart (vest) and "Harry" has a dark brown shirt with a  (almost un-noticeable) thin black check.
Here's a few more photographs of "Britt":

And that's it, I wasn;t able to do any more work on the church, as I've been unable to renew my depleted pot of filler, but I will try and get it finished at some point.

In the meantime, I haven't anything else that I wish to post about , after nearly ten years of blogging.

Over 10,000  comments (half are replies by myself), nearlya quarter of a million vies (mostly bots, I'm guessing), 134 followers, (most of whom don't follow imho) and not a single follower from my first year of blogging still commenting ! Over the years I don't think a single blog that I followed in that first year, still  survives.

Such is the way, it's been a wild ride, thanks for taking the time to visit.