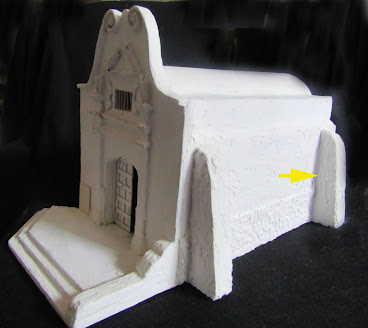 My enthusiasm for this build is dwindling as time goes on and consequently I haven't managed as much as I would have liked. Once again, I spent a lot of time waiting for things to dry out, both glue and filler. Neverthelss I have managed some progress as shown below.
The photogrpah to the right shows two of the four buttresses - I went for four, despite having no evidence for two of them, mostly because I like symmetry.
The yellow arrow shows one  of the four that I have no clear evidence of its existence!
The tower was the main objective of progress this week, requiring a lot of cutting and glueing , but the main body of the church had a lot of filler added too.
Here's the photographs:
The trapezoid nature of the foam prevented me using it, but I will be cutting it down a lot and I'll use it to reinforce the structure of the tower.
The arrow on the above picture shows one of the two buttresses that I do have evidence for,
So that's the sum total of my efforts this week, not much but still progress. I did spend a lot f time looking at photographs of the tower and considering how it will fit into the church and there's little to no evidence of that !
In other news:
I did mention last week that I had some very intersting news to share, which unfortunately never came to fruition, in part due to  the petrol shortage, but the 'event' has been re-scheduled for this weekend. Hopefully I will have some interesting things to report upon next week, which should alleviate the tedium of yet another 'work in progress' post !
That's it then for another week, I was heartened by the responses to last week's post as it's the followers'
comments, criticisms, suggestions etc. that have kept me plodding along over the last nine years.
Thanks for taking the time to visit, hopefully there was something (however small) that was of interest and as always your comments are both welcomed and truly appreciated.