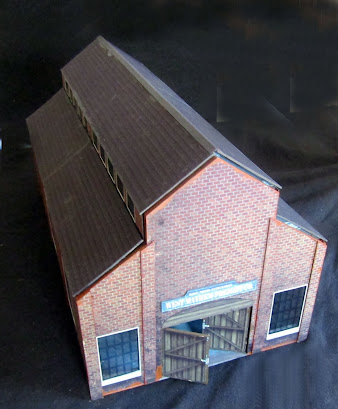 I finally managed, after two weeks of email exchanges and the petrol 'crisis', to meet Michael, who is not a figure collector, games player or painter and who doesn't make model buidlings of any sort either !
So whilst he may not be recognisable to many bloggers, his surname will almost certainly be.
Michael Scott is the younger brother of Bryan (Vampifan) and has the task of clearing out his late borther's possessions and collections. I was ably helped by my daughter, Michael, his daughter and two lovely neighbours - Ken and Dorothy.
We were there for a little over two hours, sorting through box after box of figures, buildings and games (a lot of Bryan's games have been donated to charity).   After a while it became very apparent that you couldn't believe what what was said on any box cover as the contents rarely were as stated on the box!
Micahel merely wanted the room cleared and knewthat I was on hand, so to speak, living very close to Bryan and had a very  lengthy enchanges of emails over the years (300+).  After the two hours, my daughter's car was full to overflowing and we called it a day. I very much doubt we'd loaded more than a quarter of the  "Aladdin's Cave" that was Byran's room, but I will be back to help out again.
The header pgotograph show an outstanding model, I'd never seen or heard about  in all the years I knew Bryan - It's the Mayhem Haulage Company warehouse, (built by Bryan of course), but what was surprsing to me was its size. The model is little under a foot tall and about one and a half foot long.
The other most interestng thing about it, is its scale - it's 1/32, suitable for 54mm figures !
I never new Bryan had any 54mm figures, let alone western figures (I did know he dabbled in 28mm westerners)
So where were the figures that were used with this building? In the great  collection of drawers shown below was the answer !
I recognised many of the figures throughout the boxes, early Swoppets, Timpo, Britains and Atlanttic figures among quite a few converions there may also have been afootballer or two !

I have a lot of things still to open and sort (and maybe pack a little better) and  lot of figures that I have no idea what they are.

In other news I've done a little more on my church, but I've got a lot more to blog about now !

Thanks for taking the time to visit, hopefully my adventure was of interest and as ever, your comments, thoght s queries etc. are always welcomed and appreciated.