It took me about a week to make these when it would have normally taken me about two hours (less drying time), thanks to the 15  minutes of available work time I had  in between being in agony.
The were made specifically made for my pirates project and are intended as marker 'clues', but really they're just 'x' and ''y' coordinate markers.
Their usage I'll explain below but the idea can be used for basically any genre of game; for the modern era you could use vending machines, dumpsters etc;for ancients you could use shrines etc.
Please bear with me the explanation may take a while...
The premise is that your table is laid out first then imagined to be squared off (though it could just as easily be divided into rectangles)
So using a 48" square board you could have it squared off as a 3 x 3 grid in 16" squares or a 6 x 6 grid in 8" squares (or vice-versa in this instance)
You will however need at one marker token for the number of rows (or columns, but not both) in your grid.
using my 48" square board divided into 6 x 6 squares I would need 6 markers. (clear so far ?)
There are two types of game that can be played with these tokens , both require the same basic setup and preparation
Firstly, each token requires two cards for them (I haven't thought of anything easier)
Each token will require an East-West card and another card for the North-South component of either game you're playing.
Secondly each token must be placed on the boards imaginary grid so that only one token is in any one Easy-West direction (the 'x' axis) and there are also no other tokens in its North-South direction (the Y axis).
Something to delineate which axis is which from the back of the cards may also be desirable (and easily done)
For game type 1 wording on the card would read something like "There is NO treasure to the East or West of the Lonely Grave"(maybe you could add a picture of it too (If you're clever and like that sort of thing)
For game type 2, the wording would be similar but with one big difference the wording would omit NO to Give "There IS a treasure to the west or east of the Lonely grave"
The easiest way to place the tokens on my imaginary 6 x 6 of 8" squares is to line them up initially on the top row, one to each column. Then you start with column one and determine it's actual row position. The easiest way of doing this is by having six playing cards  numbered 1to six (surprisingly enough because there are six rows) to see which actual row it ends up on, There are of course other methods, counters or even dice would do the job starting with a d6 then a d5 (omitting the row that the first token ended up on) and so on.
I must admit though that the six card trick (or numbered counters) is probably  the easiest and quickest way. 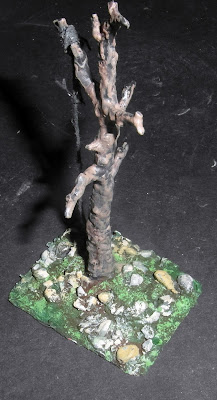 So now that all the token pieces are in their starting positions  I'll try and explain how game one works!
(The tokens can be placed in the centre of the imaginery squares as the the treasure can't be found under a token, I won't bore you explaining why)
To sum it up the objective is to find where the treasure is buried and there can be only one place it can be - initially unknown to all the players.
It's a bit like the game "Cluedo" (or if you prefer "Clue" where you eliminate all the suspects of the murder of Doctor Black one by one until you are left with only one - the murderer
So the two piles of cards (the East-West deck and the North-South deck) are shuffled and the top one is taken from each pile and unless you have a GM, they are placed where no-one can get at them or see their fronts.
The maximum number of players for a 6 x 6 gridded game I'd suggest is probably 3, maybe 4 tops!
From here on in there are lots of options (for both games) as to how to proceed.
Let's imagine there are three players, I'd deal each player a single card from each deck, which will give them a row and a column where the treasure is NOT  present  (they should probably have a scrap of paper with a 6 x 6 drawn on it so that they can cross off the relevant row and column.
This will leave 4 cards spare (two in each deck and there are two where the treasure is buried).
Once the players are satisfied that they have recorded their initial findings (or clues) take their cards back and add them to the two decks, give them a good shuffle and then place them face down in two columns. (there are other ways to do the following but many will be tedious and will result in a much longer game)
So what now I hear you ask (you did ask didn't you? - Or have you fallen asleep?)
Well, the players must find the rest of the clues, how you do this is pretty much up to how you wish to run your scenario.
Option one would be to travel to each token in turn where maybe after one turn standing there with one of your crew (I'm imagining pirate bands playing this game) you draw a card from each column note the clues down and replace the cards.
Option two is to have other places to go and retrieve more clues;"Tis rumoured the tavern wench knows a thing or two about the treasure"; "The barmy hermit Barney will take a shot at you with his antiquated blunderbuss but can tell you where the treasure isn't"; "That old graffiti on the dockside definitely states where there is no treasure".
And so on, I'm sure more creative and imaginative players than me will come up with all manner of ideas.
Eventually when a player has all ten clues he can go the imaginary grid square and dig it up.
Of course with the other pirate gangs roaming around too you may not get there alive. Rules for digging up the treasure are up to you though!
I'll now briefly explain how to play the second game
"Stay Awake there at the back !"
The initial setup is the same except for a few things .
Firstly decide how many treasures there will be (up to the maximum of 6 on my 6x 6 imaginary grid).
Shuffle both decks and place face down.
The players have no initial clues and must go to certain places as (above)
to collect more. A variation could that each location only gives either a North-South card OR and East-West one  though players maybe should know which beforehand.
Players get to keep their cards in this variant , each pair of North-South and East West will give you a treasure location and even here there can be variations - either allow treasure to be in the square where the token is or not!
Not only must you  decide how many treasures, there are you also have a means to deciding how much each is worth- maybe a d6 x 10 in doubloons, maybe a fixed amount 18 Reals each  or maybe drawn from a back of marked counter , deck of cards etc. each with varying amounts on them.
The number of these treasures counters could be limited or even more than the number of treasure available (a couple of already robbed sites maybe ?)

The first game type ends if all the players gangs are killed, eaten by giant ants etc. or maybe the treasure was found and they got away with it.
Game 2  will end similarly though players may wish to get whatever treasure they can find quickly and get out of Dodge before a tot-up to find who has the most loot!
I can easily imagine a Frostgrave game 2 setup using various Stela with the clues 'written' on them to find treasure or using the game 1 variant for a solo hunt to find the the cure for the Zombie infection, maybe from pages of someone's journal, saying where he's searched and not found it yet"
As if I haven't bored you enough already here's few notes on how I made the tokens:
Firstly they're all based on old plastic credit or, store cards etc. (with numbers and magnetic tape filed off)
"Lookout rock" is polystyrene covered in filler (as are the bases and painted to match my new terrain boards)
"The Hanging Tree" is a plastic toy that I acquired from somewhere or other.
The anchor came from one of the cheapo Pirate ships I go a while back.
What was intended as a Mayan Stela and turned into something less than salubrious was once more polystyrene covered in filler.
The cairn began life as a polystyrene cone which then had rocks glued to it carefully (it was then undercoated grey and the rocks painted individually to look how they did prior to the undercoating (I was ill at the time I tell you!)
The grave was a piece of foamboard with a layer of card cut way so I could smooth the 'grave' out., whilst the cross was two twigs glued together with the bindings added later.
The "Monkey God" has appeared before - go find it if you're that interested!
I did have a few more ideas for tokens which never made it past the idea stage - A broken wheel (or wagon), a burned out hut and an ant's nest all spring to mind from my original ideas.

In other news, I'm feeling a lot better (thanks to all who have asked after my health, so much so that I'm almost ready to put the roof on, on my current build.
And I'm also about half-way through my initial venture into Jimland - Yes, I've sneaked in a bit of  gaming!

I must also get around to welcoming some New followers, that have sneaked past my early warning systems (I blame the drugs- as usual). So "Idle Doodler", "Hils" "Gary", "Phil Curran", "Staz Matt", and "Ric Walters" welcome to my blog.
For one reason or another my followers profiles don't show any blogs of their own listed, but I'm pretty sure "Hils"Whom I know of either has a blog or contributes to one somewhere. If you guys want to comment if you do have a blog (or blogs even) and want a plug, feel free to do so,

I had hoped to be posting about my experiences playing Jimland next week, but I may well be at the wargames show  "Stand To" at Shildon railway museum.

Finally, that's it then from me for this week and as always your comments are both welcomed and truly appreciated
(I sometimes think it's our follower's comment that keep some of us bloggers enthusiatic enough to keep blogging!) ,
Posted by Zabadak at 08:21