Omitted from my last week's post were two more 'buys' from the Shildon post last week and in addition I've received a whole host of other purchase from both North Star (including Copplstone's) and ebay.
All the North Star purchases were aimed at my ;Adventures in Jimland' games, but I'm sure the natives may also see some use in piratical endeavours.
The Renedra wattle fencing wasn't a planned buy, but it only cost £5 for two frames and I've seen it at £4 for a single frame.
The 'George Orwell' figure I saw an immediate use for as a civilian and was a bargain too at £1.50 from Col. Bill's and was another impulse buy, I hadn't heard of the "Newark Model Soldier coy" and discovered it was probably a 'freebie' from a 'Partisan' . I've seen it for sale on ebay too at £3.50+ too! 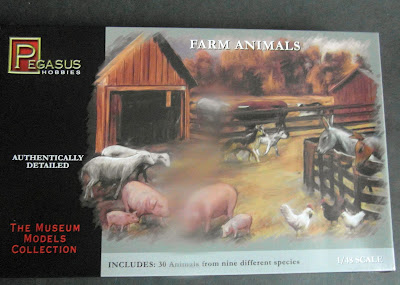 Having looked at the options of buying animals in lead I quickly looked around at the cheaper plastic animals One set in a tub cost £3.99 but only contained four cows that were of a usable size but the various ducks, sheep and dogs all towered over them. I did find the Pegasus box of farm animals for under £12 (incl. p&p) for 32 animals on ebay and are perfect to pad out my pirate towns (the initial purpose ), but they are of course perfectly usable in many contexts.

As it's close to Halloween I've also been on the lookout for cheap creepy crawlies etc. for 'Jimland',
but the £1 card of bugs was a bit disappointing (but nevertheless usable), Roy (the sorcerer's apprentice at Col. Bill's and fellow blogger) gave me a bag of much more presentable spiders at the Shildon show.
My daughter however came up trumps when she spotted a pack of bugs and Halloween stuff in a local supermarket ("Morrison's) for a mere £2!
A quick trip to view said items and I found they were perfect for giant bugs in Jimland.
So here's the photos: 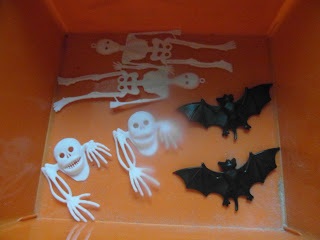 There was few other unusable useless bits too such 2d skeletons (far to large and flat), but overall well worth the £2 for the pack!
In addition to buying things I have been doing some hobby-related things too.
Cleaning and basing figures was at the top of the list, the cleaning aspect taking very little time. For bases I've been cutting up old plastic store cards etc.
All the figures I've bought have now been based and undercoated and I've even managed to spend a lot of time yesterday (Sunday) constructing the wagon I bought.
I don't normally do any gaming related things on a Sunday, but making the wagon (not for the faint-hearted), inbetween breaks in the busy football programme worked out well. I did one piece at a time which, with the frequent breaks allowed for them to dry and plan for the next.
I'm very pleased with the final model.


It's probably obvious that I haven't solved all the problems with my camera lens blur and I'm till a rubbish photographer - sorry !
I'm just about at 100% re my recent illness, but I did crick my back again, but it didn't prevent me trying to catch up with all the hobby time I've lost.

I'm currently working on the aar report of my first foray into "Jimland" and I'm hoping to post about it next week, but I am deliberating on how to present it. I'll probably follow the diary version used by blogger 'TWD' at "Toms Toy Soldiers" (search for his label Tombogoland) .

That's it then for this week, thanks once more for taking the time to visit and as always your comments are both welcomed and appreciated.
Posted by Zabadak at 05:36