Not one of the posts that I have pre-planned, Border Reiver sort of crept up on me even though I was fully aware of it!.
I hopped on our local subway train (the metro)  to find that the venue at Gateshead Stadium was a five minute walk from the station,, so ten to fifteen minutes later I arrived to find a queue to get in. a phenomena unknown to myself!
Swiftly moving on,  there was quite a number of punters there and a more than ample number of traders willing to take your cash.
In no particular order and an almost complete lack of credits for many of the games, here's some of my better (ahem) photos of the event. 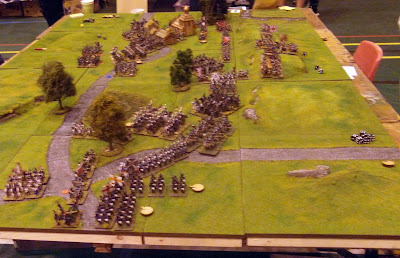 The usual lighting problems, despite my limited photoshop ability, have resulted in many of the photographs still having a yellowish tinge to them. (that's what I'm blaming anyway).

I  didn't find a single trader that had a copy of the well overpriced Congo Rules  to sell to me, whereas two years ago everyone had them!

The Battle of Newburn 1640, was a participation game by South east Scotland Wargames Club.
I had a good chat with the guys who were running it and they seemed to be busy for the few hours I was there too, which is always a good sign.
They were using "Baroque" rules.

Andrew Wiley 's western game seems to be a regular feature of every show within driving distance of Newcastle and I love it!
His card buildings  may not to be everyone's tastes but his enthusiasm for the game (he uses Dead Mans Hand rules iirc) is inspiring and I seem to find something new every time I see his game.


I had a good day out overall, met many friends, some I haven't see for at least twenty years plus, including a now established author (Osprey and Frontline) as well as sculptor for many wargames lines. I did make a few purchase, but really nothing that warranted a photo or posting about. - four d20s, three mules, a small amount of baggage and some more foam figures trays. I nearly bought a large gorilla from Crooked Dice but I baulked at the fact that it was £8 and resin (ie. plastic by another name), if it had been metal I'm sure I would have ended up buying it.


As I did my round of goodbyes before departing, Roy of the blog  "Never mind the jankers"
receiving instructing from Col. Bill as his new skivvy as the photograph to the right shows.
The photograph below shows the result, though whether or not that was the intent of the instruction remains unknown.
For more knowledgeable info (and better photographs) on Border Reiver  I'd look at some of the other blogs around that feature it!

Thanks for taking the time to visit  and as always your comments are both welcomed and appreciated
Posted by Zabadak at 07:37