I'd been looking for something, (though for the life of me I can't remember what - it's an age thing) and decided to have a clear-out of the old (Ikea iirc) 'chest' that has sat above my desk for quite a few number of years (I'm guessing about ten). I had used it to store my paints in, the deep drawers being big enough for the large bottles of acrylic I tend to use.
What started as a clean out though, turned into something of a treasure trove !
So starting from the bottom drawer and working my way up here's the results of my treasure hunt:

As expected a jumble of empty, dried out pot of paints and little else, or so I thought.

Checking through the contents for anything that could be salvaged the photograph on the right shows the results.
Two tins of old Humbrol paints, a Foliage Factory clear orangey-red and a bottle of GW dark-brown wash - all still very much usable - score!
The small plastic rhino was equally usable (there are pygmy rhino's right ?) and the marker pen worked fine too.!
Now if only I can find the rest of the pair of compasses for the ink 'arm' !
So, moving on, the two centre drawers looked a little more promising. 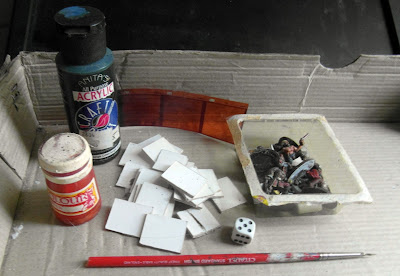 Not much this time in the way of paint, but two bottles with life left  in them sufficient  to justify their rescue - a GW Beaten Copper and an Anita dark green.
The negative found I haven't a clue about (yet); the card bases were a strange size (not being my usual 20mm square, but rather a rather larger 20mm x 25mm); the paint-brush  was still in fair shape; a die - always useful but the  blister of figures looked a  lot more promising! 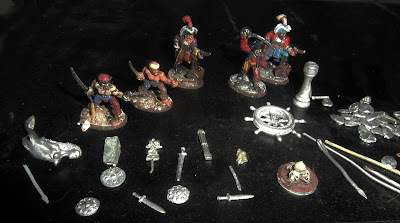 The blister was indeed a tad more than promising, it was stuffed to the gunwales with all manner of goodies, as you can probably see from the photograph to the left.
Five pirates  (two cursed with 'chest-foot'), fully painted; a capstan; a ships wheel; spears, swords and shields (all looking very ancient-ty), a small pile of skulls and a ships figurehead of a mermaid!
The five pirates brings my solely pirate  figure collection to over 400!

I didn't think the three top drawers could come anywhere near the 'treasure' I had found in the centre drawers, but once more I was pleasantly surprised at what I found therein, and delighted to find out just how wrong I was.

The left-most drawer had six bottles of paint (four unopened!) another die and a draft horse (I think for a 15mm ACW limber).

The centre drawer was slightly underwhelming but still contained three GW ink washes and  a bottle of "Brazen Brass; four new Stanley-style blades, a metal 'puzzle' and a random plastic bottle.
The right-hand drawer, with all the plastic bags in it though looked a lot more promising


The last drawer contained all sorts of goodies.
The two gladiators came as a complete surprise to me as I can't remember purchasing them or acquiring them at all  - or more importantly - why! They look like 54mm figures and will no doubt fit in with my collection of gladiators and gives me reason to write another post on my other blog, that has sadly become stagnant.
As well as the cocktail sticks, saw blades, card bases, various swords, a spear  and yet another shield, I had seven bags each containing a swivel gun (probably either from Redoubt or Irregular miniatures)
They'll probably get used at some time in the future and I now realise why I have so many pirate figures that seem to be just washing their hands - they're to man these swivel guns.
In addition to the swivel guns there was also a ships cannon (or as I would say it's like a ship's cannon, only smaller)


So to round off I give you a picture of the final 'haul', not bad imo and probably better than some 'loot' I've ended up with after many wargame shows and I think I'm also right in the title for this post "Treasure Chest".


As I intimated in last week's  post, this was the first of three pre-planned posts, but don't expect another treasure chest!
I in other  news I'm finishing the last of terrain boards that'll be used for both "Adventures in Jimland" and pirating; when finished I'm sure it'll be fodder for another post as will my first sortie into Jimland, which is imminent!

That's it then for another week, thanks for taking the time to visit, even just to look at the eye-candy (such as it is) and as always your comments are both welcomed and appreciated.