The remaining seven figures took only a couple of hours to finish and varnish (which left me with time to to spare, to spend working on four of  my terrain boards).
First up are the three figures in the photograph on the right, each having only a minimal amount of conversion.
The leftmost chap is more or less the "standard" figure (I think he's had his head altered slightly) -
Notice the puny dagger in this right hand, whilst the chap on the right has had it made a little more  substantial, (as has the chap in the photograph below). A slight bending of their arms produced a little variation. I was initially a little perplex as to their clothing until I realised that they were all sporting aprons! 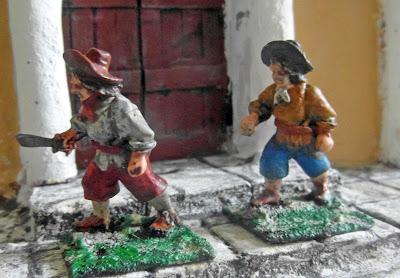 Next up are two who have had little conversion work, just their daggers.
One has been 'improved' from the six-inch nail that it appeared to be, whilst the other has had it removed completely (he's obviously a fisticuffs type of guy).
The third set of figures have had nothing done to them conversion-wise.  I couldn't think of a way of making them even slightly different from the original sculpts.
Even filing on of their hats down to make a bare-headed figure was out of the question as their facial details are almost none-existent (at least to my failing eyesight). Nevertheless, I do think that the pair are good additions to the group, they're in a quite dynamic pose.


To finish off, here's the whole group:
That's nearly all of my purchase from June, painted up now, just the pack of the eight villager figures from Colonel Bill's to finish off, hopefully by next week, but I'll also be continuing to work on my terrain boards for both my Pirate and Jimland projects (though using them in a zombie setting too isn't entirely off the cards).

That's it then for yet another week, thanks for taking the time to visit and as always your comments are both welcomed and appreciated, whether good bad or indifferent.