Putting aside the "Jimland" project for the moment I've been busily trying to finish off painting one of my recent purchases - the pack of Old Glory Villagers .
The pack contains 15 figures. in the usual OG style, (save that their heads are not twisted in various ways) with six poses.
I've finished (as far as I'm concerned) eight figures from the pack whilst the remaining seven are in the 95% finished category.
All would have been finished off, but as always real-life intervenes - hospital visits family etc.
Whilst the poses don't lend easily to conversion some small variety can be achieved as shown with the figures in the photograph on the left.
The original figure armed with a club is on the left and has had his beret removed.
The other two figures have had the club 'converted' into a make-shift sword and a cleaver.


The three chaps with pitchforks in the photograph on the left have had no 'conversion' except for the chap in the centre that has had his cap removed to add a little variety. 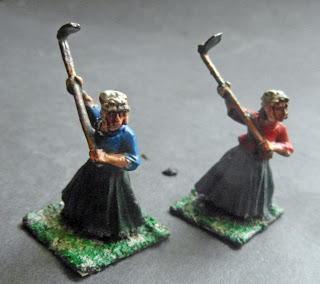 Finally for this week's post here is the only female sculpt in the pack I bought.
They're armed with what is either a hoe or an adze, though I'm open to other suggestions.
Had there been a third figure I'd have probably filed off the mop-cap to make have one with flowing hair (the hussy!).
The figures are very much early to late 18th century figures  and would easily fit in a lot of periods and genres, from London riots to the French Indian wars (as settlers) as well as the use I'll put them to in my Caribbean Pirate setting.
At £1.20 a figure they're great value for money too!

In other news, I have been making a little progress on the star fort base, but polystyrene take forever to glue!

That's it then for this week, thanks for taking the time to look and as always your comments are both welcomed and appreciated.