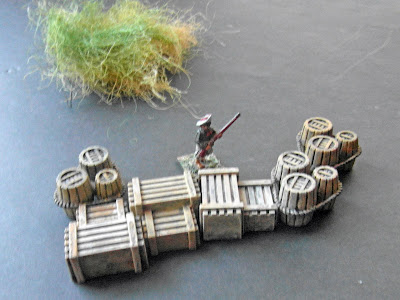 I've taken a break from the Stoetzel's Federal building build, suffice to say I could have added boobs to the already salacious sounding title (just think of the hits!).
Now that I have three each of the pirate ship's boxes and barrels, I'd have a quick attempt at tarting them up..
Undercoated with a matt grey from Poundlandbargainworld (and yes I forgot to wash the soft plastic first) then various browns and sandy colours later I came up with what you see in the photograph, although I have picked out the rope around the barrels since taking the photo.
As a reminder, here's how they look straight from the box:
And a couple of photographs of how they painted up:
One of the most obvious things to me (other then the cheapness of the models themselves, is the lack of barrel hoops - something I could probably rectify if I could be bothered (I'm not)
Also this week in a visit to my favourite shop "Poundlandworldbargainbuy", I came across this little ball of wargaming goodness:
By chance, I also stopped by my local B&M tore and in their sale they had a similar, but larger ball for the princely sum of £2.49.
I immediately went to work pulling all the individual bits from each ball.
There are about 40 'plants' in the £1 ball and about 60 in half of the pricier one (but alas no purpley-blue bits!).
Each piece has four a leaf'-stems attached to a central ring (that in turn had been attached to a stud on the frame of the original ball.

In a further burst of greenery my last two packages of Chinese plasicky, shrubbery goodness also arrived this week.
Both packs are more or less the same, with minor differences .
One pack has "heart-shaped" leaves, whilst the other has more fan-shaped leaves.
There are 50 pieces (I think) in each pack and they were less the £2  (including postage) iirc.
As can be seen on the photographs, they're quite large (about the size of a 28mm figure) and have a 'stud' for basing.

Finally, you  may have noticed, in the background of the first photograph can be seen some bush-like material. This has resurfaced after many years due to building work affecting my outside shed. It's some form of bedding or potting material that I bought about 15 years ago to use a foliage for a twisted wire tree that never came to fruition  (hence the staining). It has the consistency of coarse string (what I would refer to as "Post Office parcel string) and I've an idea or two as to what uses I can make of it (other than the obvious one of thatching) - so watch this space.!

I won't be telling you of the boob I made cutting out a foamboard wall with two printed walls hidden on the reverse side, so that's it then for this week and as always your comments are both welcomed and appreciated.
Posted by Zabadak at 05:07