Another week and more visits into the world of Poundbargainlandworld, well quite a few visits if truth be told. I regularly visit two "Poundlands" after my hospital visits (of which there have been quite a few recently), my local "Poundland" and "Bargain Buys", more frequently (Mostly for glue, matt spray and sweets) and I only occasionally visit "Poundworld" as it's a bit of a trek to get there.

However, I have had the opportunity to tour all five shops in the last week and this post shows the  results of my wanderings.
First up then are these two packs of bikes, three different colours per pack, so I bought two packs to include each of the four colours available.
I'd spotted these a while ago and didn't get the there at the first opportunity, I was very happy to find them again as I missed out so many times not purchasing something the first time around!

I have to confess, I love Helicopters,I really love helicopters and I 've looked at this particular one for a very time. It's a push along kid's toy and I wasn't sure if I likes it or not, as it comes with in-built 'features' I really don't like.
I decided though that it would be worth a little effort to 'sav' it (and for a £1 I  thought it was worth a punt)
The underneath reveals the monstrosity that shows this s the toy it really is.
Once out the packaging it's revealed as a pull the cord and watch the this 'fly' along the floor, couple that with the truly awful wheel assembly sitting on the underside.
I foresee a lot of sawing and filing to get this into any semblance of a usable model.
I haven't a clue what make it's meant to be either, which won't help with the paint-job it'll need (maybe it'll just end up black!)
Another, rather cheap looking vehicle (It's a bus- surprise, surprise!) was this 'Greyhound' bus.
There were several,  differing only in the stickers that had been applied and the one I plumped for was the one with the US flag on it (naturally), the other choice being Australia!
Whilst it's very basic (no interior detail etc.) the scale is quite good. It will add to the general gridlock chaos on my roads and shouldn't look too out of place. 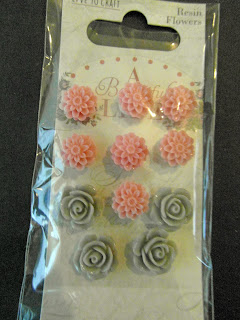 Out of interest I showed this particular purchase to my wife (and not for any reason to try and justify my flagrant spending, oh no!)  and asked her what she thought , as I really didn't quite know the original purpose.
She thought they were either dress  'buttons' or cake decorations.
I on the other and saw cabbages and flower beds!
I didn't think to take a photograph of them sans-packaging, with Sid for scale, another time maybe.

Though maybe not immediately apparent from my photo collage these are pages from a "Basic Art" design pad (or so the blurb says).  It consists of 30 sheets 6" x 6" with three sheets of each different one. I've shown the ones with what I consider the most interesting ones  from my viewpoint would be very useful as wall paper for some of my scratchbuilt buildings. The sheets not shown are rather bland colours but still usable. 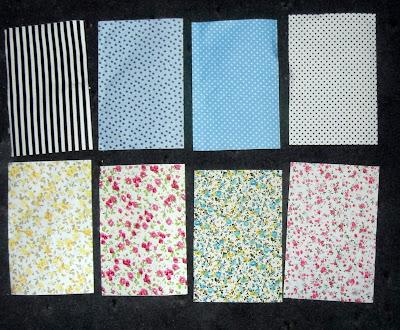 A second collection of potential 'wallpapers' also grabbed my eye and these can be seen in the photograph on the left. There are only eight sheets in the pack each 6" x 4", but they are adhesive backed and feel like a very thin cotton. Once more hey could be used as wallpapers or carpets (they really do have that feel). Other than the rather 'meh' black and white striped one, the others all have great modelling possibilities.
There is at least one other pack, but with different designs. 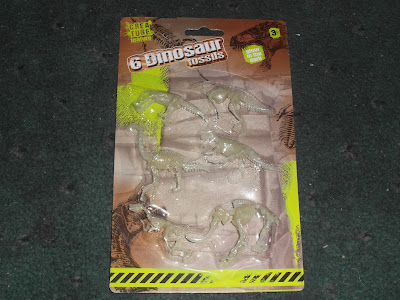 My final purchase was the pack shown on the right, a collection of plastic see-in-the-dark glowing dinosaur bones/fossils.
Despite my best efforts at using photoshop the pieces are very difficult to see.
I though of particulal interest to some gamers would be the mammoth (bottom right) which maybe would be a little too small for 28mm figures, is probably near enough in scale for 15mms, the other dinos less so.
I have no actual use for these, but having missed out in the past I did think I would purchase the pack anyway and to my delight I got it for 50p ! Poundlandbargain world after all!

So, two weeks ' worth of pocket money just frittered away, but I was very happy with all my 'bargain' buys.

That's it then for another week, but I would like to add that I have ticked off another item from my 'Bucket List',  namely taking part in the  'Gladiatoris kickstarter!.
You can read more about this on my other blog (Zabadak's Gladiator World) HERE.

As always your comments are both welcomed and appreciated.
Posted by Zabadak at 07:08