Following on from last week's Cottage build post, as promised here's another look at some of the furniture items that I bought recently. There are five sets in the series (as far as I can tell), the photograph on the right showing all of them.
From top to bottom, left to right:
Bedroom, Living room (shown last time) Kitchen, Study (I think) and finally, my favourite - the Bathroom.
All of these contain very small parts and whether it be an oil lamp or a toilet roll holder they're very identifiable as to what they're meant to be.
The packs also contain cross-over bits, so that identical chairs appear in different packs and the round tables appear in three packs., but they also all contain at least one unique item too, for example the coffee-grinder in the kitchen pack or the wall telephone!
The bathroom set is my favourite of all the sets, probably because I've tried making baths (without much success) and toilets (with only a little more success).
The little detail bits that also come with it are a joy too, from the sink unit, the previously mentioned toilet roll holder, a stool and so on.

The kitchen comes with the ubiquitous chairs (just the two though) and the familiar table, but it also has three unique furniture items too.
As one would expect, there is a stove (Arga type -middle back of piccy) , and two cabinet type things; the coffee grinder (red) is unique to this set whilst the jug and bowl can be found in others too.


The bedroom set contains what you probably would expect to find in a bedroom - a bed (surprise surprise), a set of drawers, a bedside table and a dressing table. There is also another oil lamp, bowl, jug and chair too.
I chose to show the back of the set to illustrate the fact that most of these pieces don't have a back to them and are obviously designed to be placed up against walls .

I haven't as yet glued any of the pieces in place in the cottage, but as I bought two of each of the five sets, I have plenty of options.


The "Study" set has a mere two unique items in it, the other pieces all being found in one or more of the other sets (mostly the dining room set). However the two items are worthy of a mention as they're both rather large pieces (and of course another three chairs and a table are not to be sniffed at!).
As can be seen in the photograph there is a rather grand panelled cabinet and another desk, larger than the living room one, shown in last week's blog post.
Obviously all these models have nought but a basic colour scheme on them and would benefit greatly from a decent paint-job. 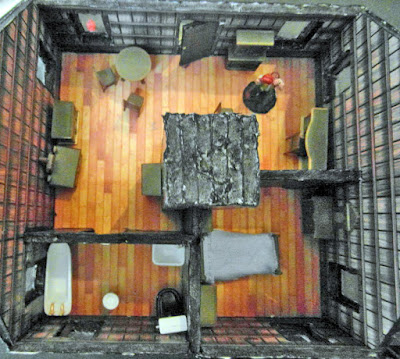 Finishing off the "grand tour", here's a couple of photographs of the 'furnished' cottage from above.
If the furnishings had been some of my own scratchbuilt items or even, card ones there would be a lot less space and it would probably look very crowded. As it stands, with a dozen or so pieces furniture in place it may look a bit sparse, but there is more than ample room for figures (even those on 25mm bases!).
So that's it, the cottage could be ready to 'movein' at a moments notice (if I ever finally decide how to arrange the furnishings). I'm sure it hasn't escaped anyone reading this that there is no obvious time period that applies to this collection either. Many of the pieces are as usable for the 17th Century as the 21st century, though the upright flush toilet probably dates back to the late 19th/early 20th century and the oil lamps don't see much use nowadays. either!


Other than practising my Fen Shui this last week,  I've also started another Stoetzel build, that came with it's own list of 'problems'. It's one of the larger produced and despite looking forward to making this model, has not been a very satisfying build so far. - More of this at a future date though.

In between cutting and gluing I've also been working on that £1 bargain chopper, cutting the toy components away and attempting to smooth out the 'joins', with varying success. It has reached the stage where it's been undercoated (gloss black) and requires painting  - not something I'm looking forward too and a bit of research, revealed it to probably be a representation of Airbus.

Despite real-life domicidal upheavals, ongoing health issues and Xmas on the horizon I've also been working on my version of Two Hour Wagames' Pirate rules "And a bottle of rum", which I've found to be the most akin to what I've wanted from a set of their rules (though I still dislike their shooting rules - haha) and 'pirate' rules in particular. I have a lot of THW rules in many genres and these I have found the most likeable. Other than the shooting rules I've mostly been making the game into more of a rpg than the pg 'lite' type of game is is at present. Also, as I don't have a lot of room to fight sea actions with my 20" + ships on my 8' x 4' table I've developed a set of abstract ship to ship combat rules and am awaiting some much needed feed-back (as I am with my gladiatorial beast rules).

Finally, am I the only one that dislikes the new-look blogger dashboard? - Just saying

That's it then for another week, I hope that this spurt of enthusiasm will continue unabated for some time despite all the hurly-burly that is continuing around my own purlieu.


As always I hope you've found something of interest and your comments are both welcomed and appreciated.